OK, a sunset is a photographic cliché, I admit it. But all I had to
do was step out on the porch and click. This is one of the better ones we’ve
had so far. 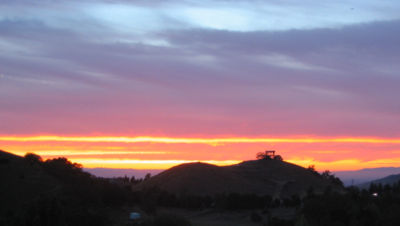 Oh, and I have progress to report: 15 pounds burned off since I made up my
mind to get off my ass.

It started about six months ago, after I got back from the ACES conference.
I’d been blogging like a fiend for about eight months at that point, and the
workouts had become as scarce as cool breezes in Baghdad. It got to the point
where I was either buying all new Levi’s or getting on the Stairmaster and working
my way back into the ones I own already.

I burned off the first 10 over the spring, and figured I’d burn some more on
the hills in the neighborhood in our new place. Things weren’t going too well
for the first month or so — lots of walking for distance (nine miles one day!);
lots of sunburn and sore feet, but not much feel-the-burn. Then I started really
working the hills a few weeks ago (I actively hated the concept of gravity for
a while there) and the change was astounding: I lost five pounds in two weeks.

I wrote about climbing Mission Peak, which I climbed from its base in Fremont
the Saturday before last. You also can hike to from a park down the road from
us. Here’s a picture I took on that trail last Saturday. 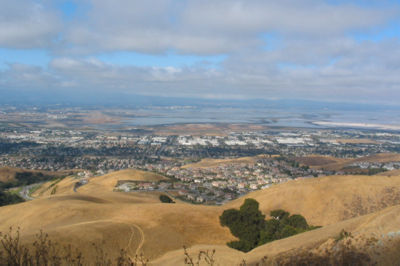 That’s the southern limit of the San Francisco Bay just above the center of
the picture. This is about three quarters of the way up, if I recall it right.
I didn’t make it back over to Mission Peak — it was still a mile or so up the
trail when I turned back after a two-hour hike.

This week I’ve been walking down the hill from our place a little bit further
every day. We’re near the top of the ridge and it’s about five miles down to
civilization and flatness, so when I’m in really good shape I hope to be able
to walk to the bottom and back, a 10 mile round-trip with half of it uphill.
Check back next summer for that one.

Here’s a shot from this morning’s walk; we had sunshine (vs. peasoup fog) for
the first time in over a week, which provoked my inner shutterbug. 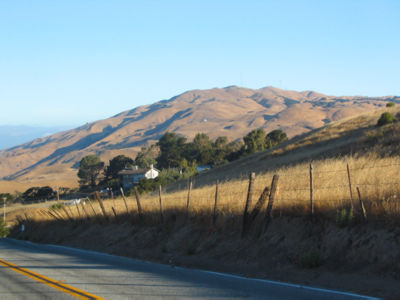 Last Saturday’s walk got me almost o the top of that hill over there. I turned
back because I was dead tired and there was a guy coming the other way, so I
figured it’d be nice to have somebody to chat with on the way back down. It
was. (People are always cool on the trial.)

So this morning I’m ambling down the hill and what do I see but this long-legged
waterbird next to a little pond: Just after I noticed the bird and squeezed
off a shot, the dogs on the property noticed me; their barking alarmed the bird,
who flew off.

A good day is when the birds do something interesting when your finger’s on
the camera shutter release.

And now, a few more Great Trees of California entries. 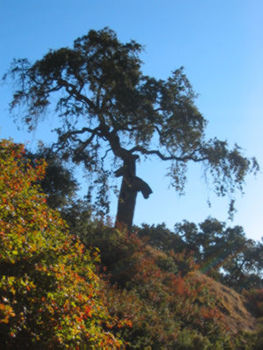 This must be where the phrase "get bent" originated from. 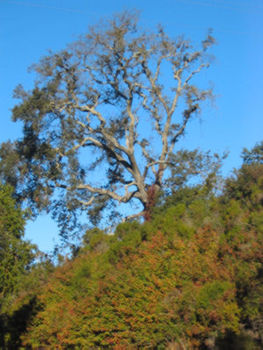 Or maybe from here. 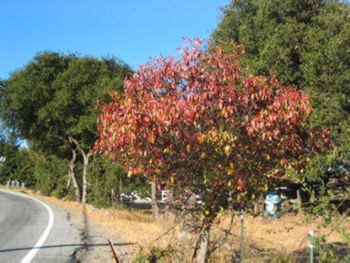 More like a shrub, but the colors are nice. 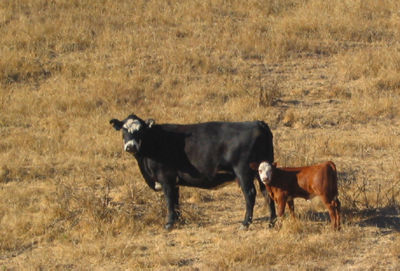 Mama and baby. A year from now the little guy’s luck is going to change dramatically,
I expect. Those Quarter Pounders with Cheese gotta come from somewhere. 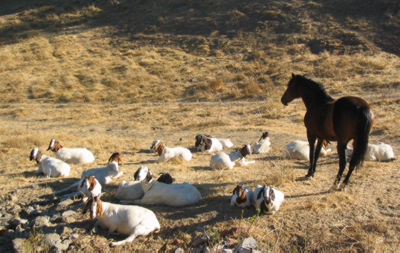 These goats look like they’re all from the same tribe. Whatever the horse thinks
of this, he isn’t saying.

2 comments for “Pictures and weighty thoughts”