Except for the wheezing and hacking.

I was warned of grievous bodily harm if I even thought of taking pictures of a certain someone in this condition, so no Christmas pix this year.

“Cry of a Tiny Babe,” by Bruce Cockburn

I felt the baby kick today"

Is that of Herod, a paranoid man
Who when he hears there’s a baby born King of the Jews
Sends death squads to kill all male children under two
But that same bright angel warns the parents in a dream
And they head out for the border and get away clean

There are others who know about this miracle birth
The humblest of people catch a glimpse of their worth
For it isn’t to the palace that the Christ child comes
But to shepherds and street people, hookers and bums
And the message is clear if you’ve got ears to hear
That forgiveness is given for your guilt and your fear

In the cry of a tiny babe

It was about 4:30 this afternoon and we were getting near the end of the do-four-days’-work-in-three routine that we always do three times a year, every year, for the privilege of not having to work on the actual holidays, when Michele, one of our veteran part-timers who was filling in, sent a message to everyone one the desk that went roughly like this:

I could be here or I could be in a church full of unfamiliar faces. I’m happier here with all my friends on Christmas Eve.

It’s a paraphrase but that’s how I remember it. A nice thought to have in one’s brain on the ride home.

Sorry, now Melissa has what I had, and my reward for infecting her is looking after her while she coughs, hacks and sniffles the next week away.

Tomorrow, though, for sure.

Till then, read Howie’s new blog, or John Perry Barlow’s. (Both links via J.D. at New Media Musings.)

I’m saving my strength so I can go in to work and infect all my colleagues. More snotty commentary to come tomorrow or maybe the next day.

While trolling through a bunch of Saddam pages over at the News Page Designer site (thanks to newsdesigner for the link), I startd noticing the names of people I’ve worked with in the past. So I figured I’d document them here:

It’s 7 p.m. Saturday night in front of the Rio Theatre in Santa Cruz. We’re standing in a line with seven other people who bought advance tickets. Another line is forming at the ticket window … about a dozen people are in line to buy their tickets or pick them up.

This tiny gaggle represents the population of the earth willing to line up here an hour early to see Dan Hicks and the Hot Licks . I notice a piece of paper taped to the front door says no alcohol is allowed in the Rio. Swell. One poster announces a musical ensemble that will perform all the songs from the Beatles’ White Album sometime in the future, and another announces a Biker Movie Marathon of a few weeks back, sponsored by the Harley dealer across the street. Missed a chance to see both "The Wild One" and "Easy Rider" on a big screen. Crud.

By the time they let us in, a couple hundred have lined up behind us. It’s a fine crowd for a decent-sized pub, but the Rio holds 600. We find seats in the center, about six rows back. They would be great seats, except that the springs are worn out and it’s impossible to find a position that feels comfortable.

After we decide these seats will do, I make a drink run. Coffee and water are the choices. And maybe tea. What kind of concert is this? Anyway, I come back with my bottled water, get somewhat settled back into my seat that cannot be settled into, and the first thing I hear is the megaphone of this loud-mouthed matron behind me. She’s got herself turned around sideways in her seat and is shouting down to her friends. The closest things to her mouth are my ears. I look over at Melissa and she’s holding her ears and counting backward from 100. This woman blabs loudly and constantly for the next half-hour as we wait for Dan and company to take the stage. I want to reach back and throttle her but decide to wait her out. The band will be louder, I figure.

Finally the lights dim and we see Dan and the band walking down the aisle toward the stage. It can’t have escaped his notice that the room is maybe two-fifths full. He walks up to center stage, gazes out over us and assumes the look of a bandleader calculating how much of the gate receipts he gets to keep after everybody else gets paid. What happens is we get what he was paid for. Which, it appears, wasn’t much.

Dan sings, plays rhythm guitar and amuses the crowd with ironic/sarcastic banter between songs (everybody chuckles when he refers to all the band’s records as "The White Album"). His band is a bass player, a fiddle/mandolin player, a lead guitarist, and two blond-haired backup singers, the Lickettes. One of them is tall, thin and slightly aloof. The other is shorter, a bit frumpier but by any estimation the only person on stage having any fun. Always smiling, she grooves, she plays strange hand-held percussion instruments, she stops between songs to mop the perspiration from her brow. Near as I can tell she’s also the only one working up a sweat.

The Hot Licks’ sound is grounded in the two acoustic guitars, spiced up with the violin/mandolin and the Lickettes’ voices. Hicks calls it a mix of jazz and folk, which it is, except without the cloying lyrics of folk songs and the musical virtuosity of accomplished jazz soloists. His players are good, but they’re not supposed to wow you into that stunned silence that ends only when you burst into applause because, well, that’s what you do when the band is having one of those crazy-amazing interludes.

We don’t get much crazy-amazing from Dan & Company tonight. It’s more like, "OK, that was pretty good, now let’s see if the next song is any better." Don’t get me wrong, this is a good band that plays well together. It’s not like it’s agony to sit through each song or anything. Everybody does their bit, but somehow the whole is less than the sum of its parts. Maybe it’s the room being too big for this sound, or Dan having some lifelong grudge against Santa Cruz. Maybe it’s me being aggravated by the mouthy woman behind me (who did quiet down during the show).

I think we were all kind of glad when it was over. I’d advise anybody who likes acoustic music to check out Dan and his band — if it’s a small venue. Dan’s goofy, half-mumbled wisecracks are half the fun, but he needs a more intimate room, like a bar or club, for it to work. And, I suspect, he needs to be reassured that he’ll earn a paycheck from the night’s proceedings. 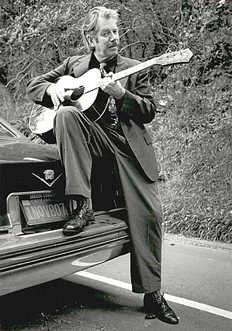 We’ve got tickets to see Dan Hicks and the Hot Licks at the Rio Theatre in Santa Cruz tonight. The event: Holidaze in Hicksville. Dan and his band have been around since the late ’60s. Master Trivian John Orr gave me a copy of their live album, “Alive and Lickin’,” a couple years back. It’s a hoot — humorous and musically rich.

Here’s a Dan Hicks overview from the Gleaner in Henderson, Ky. Seems Hicks’ tour culminated last night at the Fillmore in San Francisco. No telling what’s in store tonight.

… that it’s somebody else’s job to put out Friday’s paper. The Metro Desk folks at the Mercury News have a big ol’ feast planned … it’s almost like not having to work because there’s one edition and five stories on the budget. Good thing the rest of the world keeps providing news to fill in the rest of the holes.