When I was about 10, I prized war movies above just about anything except the discovery of an unseen rerun of "Star Trek." My test of a worthy war movie was simple: If I saw any girls’ names in the opening credits, it failed. 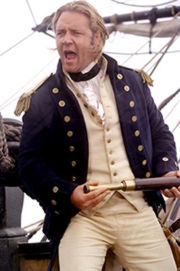 There are no girls of any consequence in "Master & Commander: The Far Side of the World." This is a movie about men and ships, duty and obsession, combat and killing, luck and leadership — pure guy stuff from stem to stern. Russell Crowe and his cast of unknowns are fighting men (and boys) with two enemies: a seemingly unsinkable French frigate and the always implacable sea. Director Peter Weir of "Truman Show" and "Year of Living Dangerously" fame should have added a third enemy — fear — but this is a tale of gallantry so there isn’t much wallowing in weakness.

"Master and Commander" passed the girl test, but it tested my patience for high seas epics in which:

Let’s face it, the poopdeck of moviedom is worn pretty smooth with these plot devices. Filmmakers return to these elements because they’re trustworthy tools for building a high-seas adventure –the trick is to fashion a movie whose familiarity breeds warm recognition rather than cold contempt. "Master & Commander" pulls this off, for the most part.

It’s not one of those Great Films like "Schindler’s List" or "Jaws" that show you something you’ve never seen before. It does, however, find fresh ways to retell stories you’ve heard a dozen times already. Interior shots bring to mind the cramped, nasty innards of a 19th century warship, and amazing sound and visual effects make the combat about as lifelike as mere moviegoers can stand. When cannon balls hit home, wood splinters rather than explodes. Gunners’ cannons have pet names. Bread at the captain’s dinner table has worms. Much of the credit here rests with a guy you’ve never heard of: production designer William Sandell, who did similarly impressive work on "The Perfect Storm" and "Air Force One." It feels real because he made it that way; the closest comparison I can think of is the banana-draped bulkheads of "Das Boot" (a better movie because it had a better story).

This story begins and ends with Captain Jack Aubrey, a Brit whose mission is to intercept a formidable French frigate off the coast of Brazil. The story, lifted from the first and 10th installments of Patrick O’Brian’s 20 "Master & Commander" novels, goes like this: It’s 1805 and Napoleon has conquered Europe and has his eyes on British Isles. If Britain’s fleet can sink enough French shipping, perhaps Mr. Bonaparte can be kept on his side of the channel. Aubrey’s best friend is Dr. Stephen Maturin (Paul Bettany, who played Crowe’s imaginary roommate in “A Beautiful Mind”), the ship’s surgeon, whose hobby is collecting rare specimens of plant and animal life. Captain Jack is constantly explaining nautical matters to his doctor, who is constantly reminding the captain that he’s pushing the men too hard, pushing the ship too hard, pushing himself too hard. Think Dr. McCoy before the invention of anesthesia.

The captain, the doctor, a one-armed preteen midshipman, (a scene-stealing Max Pirkis) and a scary soothsaying sailor (a crusty George Innes) chase their prey (or are they being chased?) into the South Pacific, where a stop in the Galapagos Islands provides some of nature’s best lessons in defense, deception and adaptation. It’s one of those moments when you realize every period movie is a commentary on the time of its creation as much as the time it is set in. The doctor wonders if these strange species with their amazing adaptations are the work of God alone, or if they help things along. His one-armed apprentice proves an able naturalist. Creationism vs. evolution and an inspiring story of a brave boy overcoming a disability. How 21st Century can you get?

The movie tempers its rip-roaring battles with dollops of humor that humanize the heroic Captain Jack and his crew. He’s a hilarious drunk prone to corny puns and knowing wisecracks. When the doctor’s getting ready to go explore the Galapagos flora and fauna, it’s suggested that a plant be named after Lucky Jack: "Make it something prickly and hard to eradicate," the captain recommends.

"Master & Commander" is a good story, well told. I’m not convinced it soars to the heights some critics are conferring upon it — it’s doesn’t shed much light on the grand mystery of what draws men to the sea — but these days movies have gotten to be so routinely insipid that a good old fashioned sail-and-cannon epic will do in a pinch. Even one with no girls in it.

2 comments for “Casting men upon the waters”