Yesterday was another of those perfect Bay Area days. Blue skies, warm sun,
cool bay breezes. We made the most of it by taking the Alameda ferry over to
SBC Park to see the Giants play the Florida Marlins. The Giants won 6-3. Barry
Bonds hit a hard pop fly to center on his first at-bat, but that’s as daring
as the Marlins got all day with Barry at bat. He was intentionally walked four
times — fittingly, one of his teammates got a hit that allowed Bonds to score
the winning run.

Getting ahead of myself. Here’s how the day went: 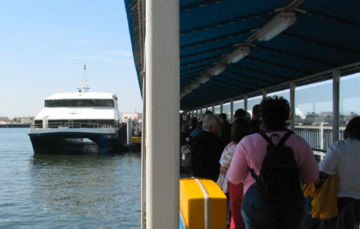 We line up to board the ferry, docked at Jack London Square in Oakland. It’s
$21 for two roundtrip tickets. It makes another stop in Alameda, then goes straight
to the ballpark across the bay in San Francisco. 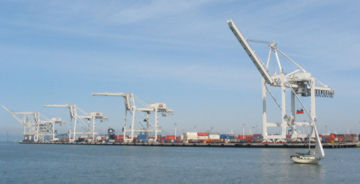 These giant cranes at the Oakland port reminded me of those gaint war machines
in the second Star Wars movie. 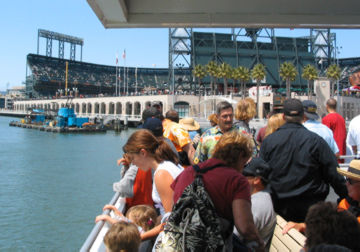 Here’s the ferry stopping at SBC Park in San Francisco. Overheard: "You
know what SBC means? Some Big Corporation." The water over at left is McCovey
Cove, where many a Bonds homer has splashed down. 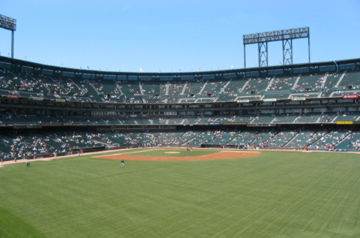 If you stood here long enough you’d see one of Barry Bonds’ home runs sail
right over your left shoulder. 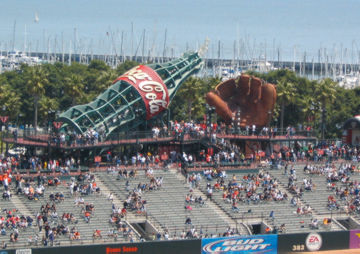 A couple of the whimsical adornments at the ballpark. 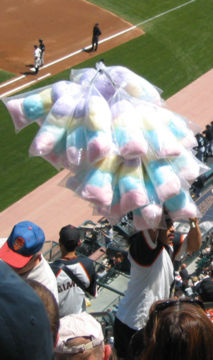 I have no idea who eats cotton candy these days, but somebody must like it. 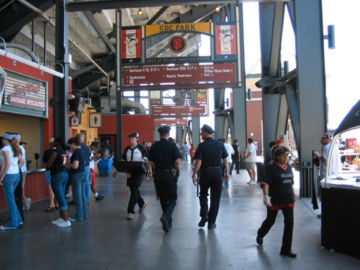 Are seats were not far from here, behind home plate in the upper deck, about
six rows from the top. Nosebleed city, for sure, but a good place to see the
action far enough away that we could avoid seeing grown men scratch their private
parts. 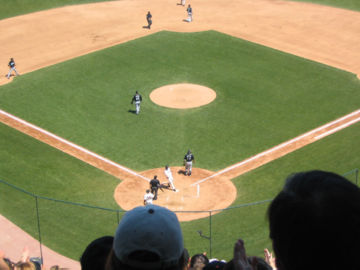 The Giants went down 2-0 early in the game. This is a Giants guy tying the
score at 2-2. 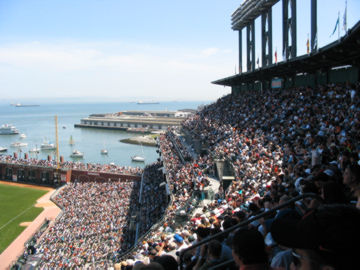 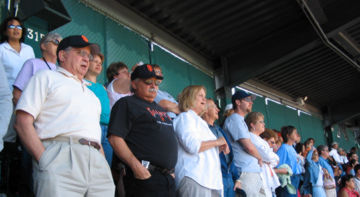 The folks behind us are singing "Take me out to the ballgame," during
the Seventh Inning Stretch. 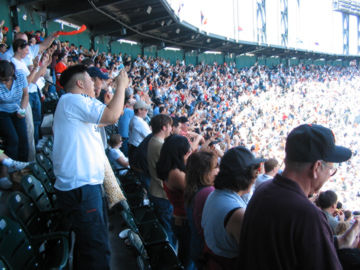 Everybody stood up when Bonds came home to score the go-ahead run. 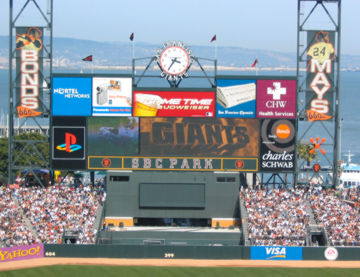 The scoreboard is immense. 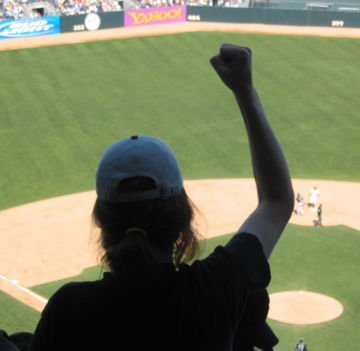 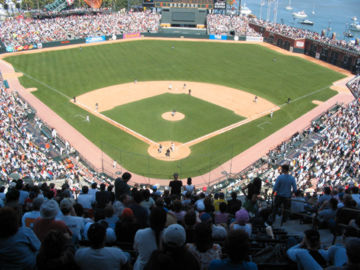 Nice overview of our perspective in the stands. 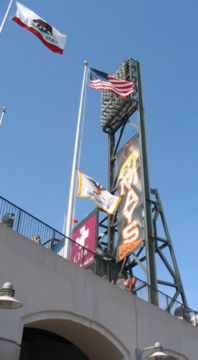 Another patriotic visage to keep the Patriot Act defenders away. 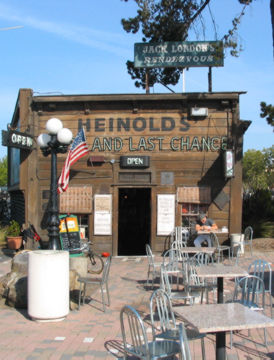 When we got back to Jack London Square after the game was over, we stopped
by this old bar to grab a beer. Prices are much kinder ($4 vs. $7.75 at the
ballpark) and there’s the benefit of having actual writers like the guy at that
table (he really was wearing a beret!) scribbling into their notebooks. The
inside is dark and quirky, with the added advantage of a sloping floor resulting
from too many earthquakes. Supposedly Jack London used to hang out at this bar,
but even if he didn’t, he should’ve. It has room for about 15 people at maximum
capacity. It’s an obvious tourist trap, but it’s one of my favorite places in
the Bay Area. Always has cool bartenders on duty and good music in the CD player.
With any luck it will never become popular. 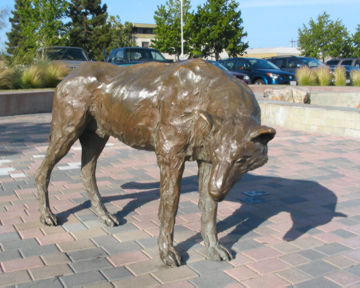 Here’s a sculpture of a wolf, because Jack London wrote about wolves. Had he
suspected he would inspire an urban shopping zone named in his honor, he probably
would’ve become a copy editor.

4 comments for “Another day at the ballpark”