The past few mornings I’ve been taking four-mile walks — good for the heart
and not half-bad for the soul (which arrives home sweaty and emboldened to take
on a grueling day of copy editing).

There’s a whole ecosystem of living things along the route. Here are some of
the things I’ve seen of late. 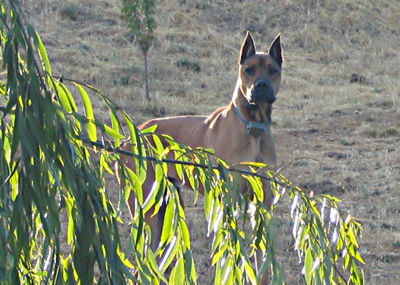 The folks across the road have this immense Great Dane. Almost everybody else
has dogs of some kind but this one burned a permanent image in my brain. It’s
not like you can forget a face like that. The uncanny thing about dogs is their
vocabulary of smells — when I first started walking all the dogs in the neighborhood
would go barking mad on me, howling and raising hell in my general direction.
Within a few days they had my odor on file, figured out I wasn’t interested
in their territory, and felt comfortable in actively ignoring me. Believe me,
when this big dude stops barking at you, it’s welcome news. 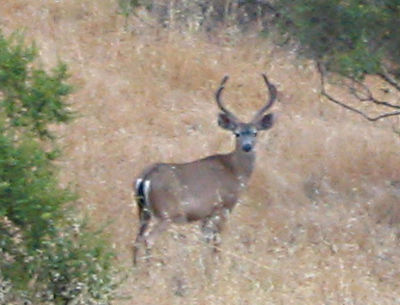 There’s a family of deer nearby, too. This guy appears to be the patriarch.
I’m hoping he doesn’t become roadkill because I’d love to see how big those
antlers get (he’s a four-point buck now, but his rack oughta be a lot more
spectacular in, say, October). He was about 40 yards away when I took this shot …
the digicam’s zoom function paid for itself here. 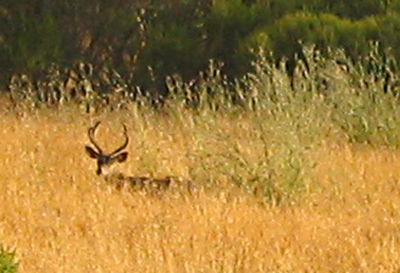 I saw him again a day later in about the same place (I was about 15 yards farther
away), but the sun was out in full force, changing the color of the scene entirely,. 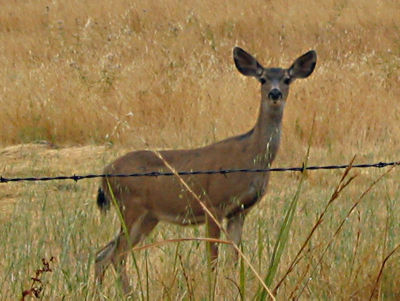 Down the road a stretch I stopped just in time to see this young deer stopping
as well. Normally a deer will freeze for a few minutes, then flee. This one
didn’t have enough sense to know I was one of those bad human types, and walked
up to get a closer look at me as long as I was standing still. Distance here
was about 20 feet.

These are some of the wild turkeys that we see along the roads now and then.
They make that gobbling sound you hear at the turkey ranch at Thanksgiving.
Again, the zoom on my camera gave a decent shot, but to tell the truth, wild
turkeys are so ugly you don’t really want that good of a look at them. 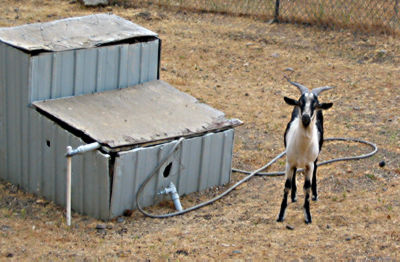 One of two goats at a farm down the road send greetings when when I walk past. 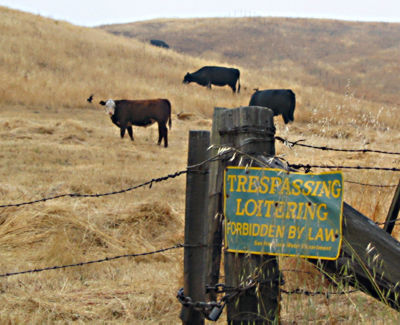 Cattle are the largest and most ubiquitous creatures along the route. I love
the way they have all these "no trespassing" signs on land nobody’d
want to trespass upon. 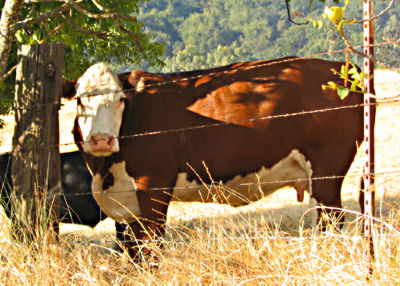 A stately Hereford cow along with a couple dozen others Tuesday morning —
they were all mooing up a storm for reasons I could not figure out as I was
walking past. See, all the cattle were on one side of the road, and the farmhouses
of their owners (and a large corral) were on the other side. When I came back
this way while heading home, all the cattle were across the road in the corral,
and the ranch hands appeared to be guiding them into a pen for purposes we’d
just as soon not go into. Seems I missed a real live roundup. Damn. 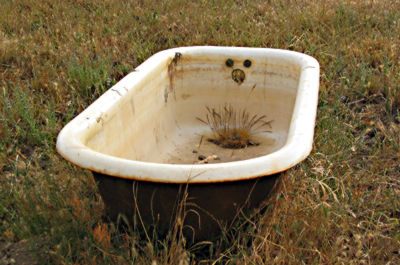 You see the damnedest things in the country sometimes. I’m guessing this old
tub collects water in the rainy season and gives the cows a place to stop for
a drink. 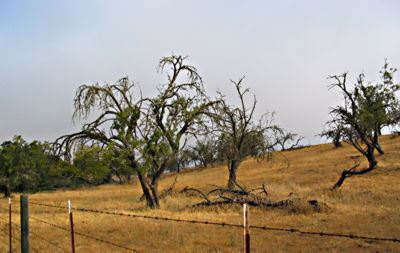 I think this might be part of an old orchard gone to seed. The wackiness of
the trees seems appropriate to California. 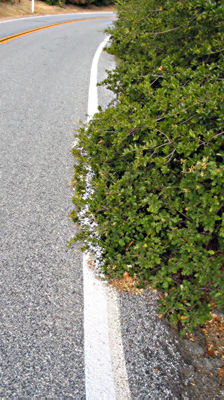 Humans are the least mysterious creatures in these parts, particularly when
displaying that "close enough for government work" trait peculiar
to the species.

4 comments for “Meet the local mildlife”