OK, so back when I had a moment of weakness that lasted 10 months and blogged
almost every day, I got the fine idea to do something called "blog me out
to the ballgame," in which a bunch of bloggers all go to the same game
and write about it on their blogs. After I retired the blog that gave me this
swell idea, the whole bloggers-at-the-game notion crept back into the background.
But I still had my two tickets to the A’s-Giants game, and I knew of at least
one guy who said he had bought
his tickets too. So I felt obligated to at least do something, and this is that
something.

I’ll tell you right off, the game was unremarkable. The Giants won because
their pitchers kept A’s base runners away from home plate. None of the late-innings
knuckle-gnawing of the past two games. Mostly it was a scalding-hot way to spend
a Sunday afternoon. But at least there was beer. 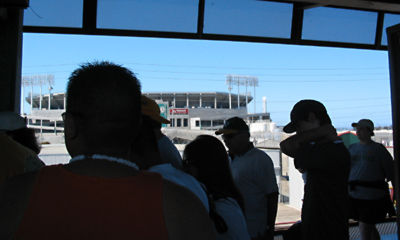 One of the coolest things about A’s games is that the BART train stops at he
stadium so you can get in, get out and not have to fight parking lot traffic.
When the A’s aren’t playing the Giants and drawing crowds in the 28,000 range,
you can buy your tickets at the stadium and get good seats. 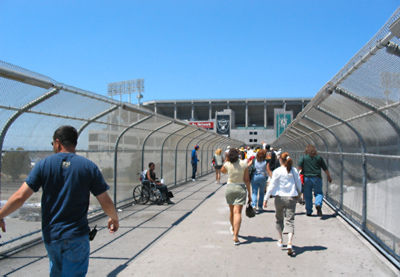 This is the crosswalk heading over to the ballpark. Network Associates Coliseum
is perhaps the least-charming sporting venue on the planet … built back before
it occurred to people to build charming, cozy ballparks in the middle of a big
city (The Giants new stadium is a prime example). This one has industrial parks
for neighbors. 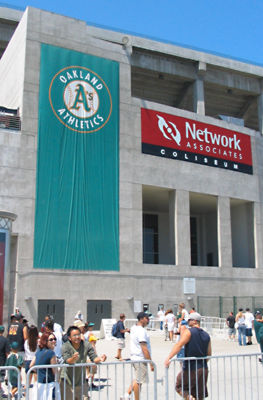 Another great thing about the A’s is their winning tradition. They’ve never
gotten much respect — Bay Area people have always preferred San Francisco and
the Giants to Oakland and the A’s. It gives ’em an underdog aura that’s really
undeserved: the A’s have always had one of the best organizations for developing
and finding talent and assembling great teams. The last time the A’s and Giants
met in the World Series (in 1989), the A’s mauled ’em. It’s like a bug up the
butt of Giants fans. The Giants had Willy Mays but the A’s have all the World
Series rings. 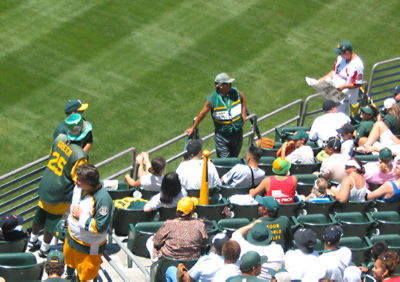 A bunch of hard-core A’s faithful at field level. We were in the park’s Plaza
Level bleachers, which were cool because they had shade (at least till the sun
got higher in the sky; it didn’t get unbearable till the eighth inning, by which
time the Giants pretty much had the A’s licked. 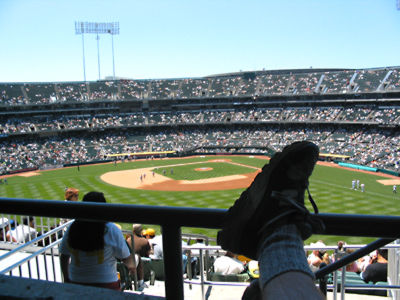 Yeah, that’s my shoe. We arrived early enough to find seats at the front of
a section, allowing valuable kick-backage. 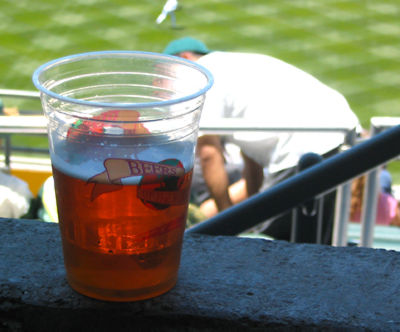 Beers promoted even more kick-backage. Oddly enough, to my way of thinking,
this here Sierra Nevada Pale Ale was selling for the same price as Bud Light.
I didn’t ask why, I just purchased. Some descendant of Carrie Nation must be
in charge of setting prices, because at $7.50 a glass nobody can get drunk without
risking bankruptcy. 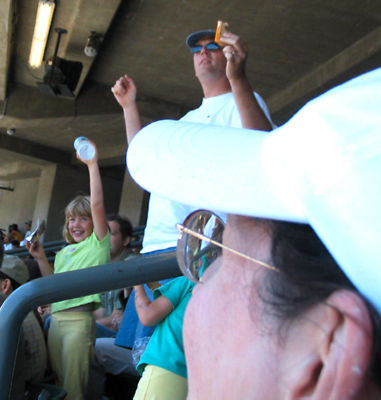 Between innings they have this promotion asking fans to wave their water bottles
in some outrageous fashion, and some prize goes to whoever acts nuttiest. Or
something. Anyway, this little girl and big guy were very much in the spirit
of the competition. 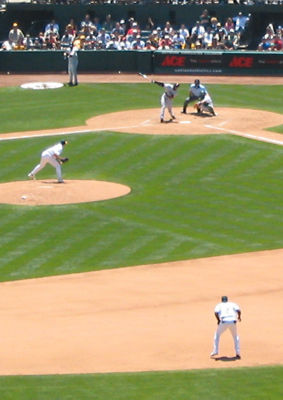 Here’s the dangerous Barry Bonds at the plate. He was first up in the inning,
right after the A’s had fought and scratched and clawed to get a single run
home. Most teams walk Barry because the next hitter isn’t nearly so fearful.
But if he’s at bat first in the inning with nobody on base and you’ve got a
one-run lead with a solid left-hand pitcher who should be able to get him out,
you let him pitch to Barry. He swings with enough force to launch a Volkswagen
to Neptune, but this pitch gets past him. I’m goofing off, looking away from
the action when I hear the "pop" which can mean only one thing: Barry
has smacked another one into the bleachers about 50 yards to our left. One swing
nullifies the A’s efforts thus far. It was going to be that kind of day. 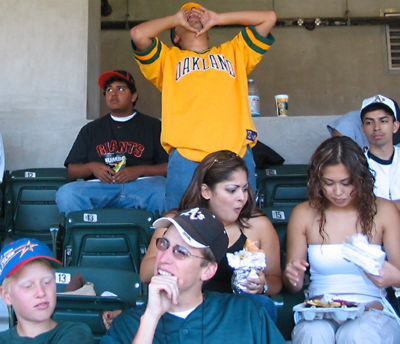 I’m pretty sure the guy in the yellow is hollering "Let’s Go Oak-Land"
at the top of his lungs. When he’d rest, the guy in the Giants shirt next to
him would do the same, only it’d be "Let’s Go Gi-Ants." The odd thing
about these interleague games between local teams is that they fill the stadium
with large numbers of fans rooting for each team. Which means if you’re on your
way to the john because of too much beer to early in the afternoon and you hear
the crowd erupt into mad applause, you never have a clue who the beneficiary
of the uproar might be. I also wondered whether it was such a good idea to have
so many fans of the opposing team in one’s ballpark. If they’re outnumbered
500 to 1 they tend to behave; but if they’ve got lots of friends, and lots of
beer in them, they could get carried away. But everything was calm from our
perspective (maybe they’re on their best behavior because they skipped church to
make it to the ballpark in time for the first pitch). 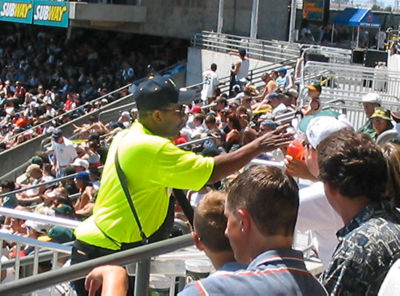 This guy had the lime-greenest shirt I have ever seen. 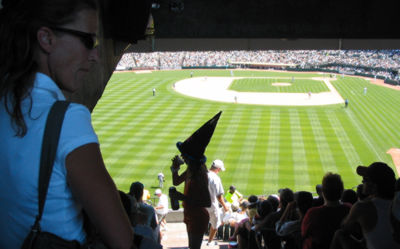 OK, so now it’s late in the game and the A’s are down by 3 and there’s not
much point hanging around, except we remember the Giants scoring four runs in
the top of the 9th last night and we figure, what the heck, may as well stay
till the last pitch. No miracles this time, though. Mostly it was hot and sweaty
in the sun, which, I suspect, is why we have so many night games in this league. 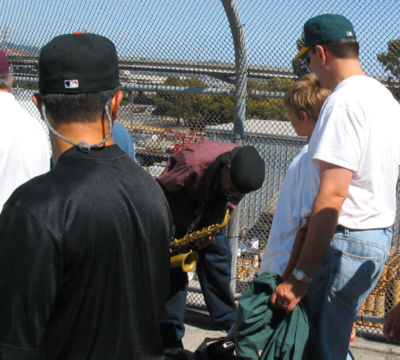 A saxophonist entertains the crowd heading back to the BART platform. 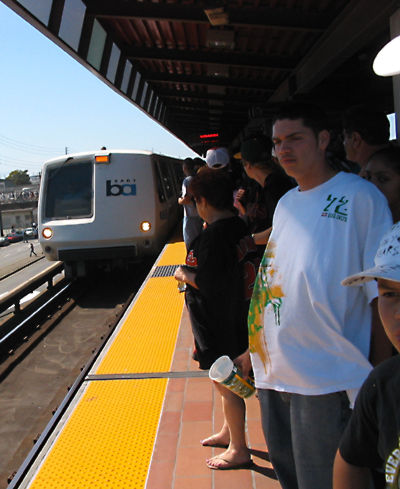 Here’s our train. We stood in line five minutes max, then we were on our way.
And somebody else did the driving. Great way to cap a day at the ballpark. 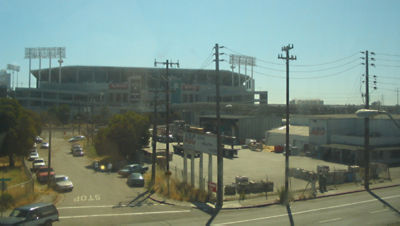 Our last look at the ballpark before the BART train pulls away. In the flower
power era, the hippies lived across the bay and the Hells Angels lived in Oakland.
I’s that kind of town. Gritty, unpretentious. Violent if you’re in the
wrong neighborhoods. The A’s have great fans; I just wish there were more of
them, but then again, if they were popular they wouldn’t be cool. So let’s hope
nobody builds them a quaint little Wrigley clone downtown. It’d ruin the
aura.

3 comments for “Another day at the ballpark”