I walked 8.5 miles yesterday. Afterward, my feet persuaded me they much prefer
the 5-mile variety of nature walk.

It takes almost three hours to go that far … about 3 miles an hour with
a few small rest breaks. Plenty of time to think about things, like how before
the advent of steam engines and railroads, no human had ever gone faster than a horse
or strong wind could carry him. On foot with no assistance beyond a tailwind,
I can relate to the notion of people walking from Jefferson, Missouri, to Oregon
in the 1840s. The trip Melissa and I took in four days in the summer of ’99
took six months two centuries ago.

Of course, there must be pictures of the sights along the way. 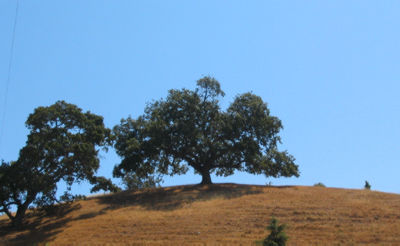 California has great trees. Giant sequoia redwoods get all the press, but a
big fat shadetree like this one on top of a hill has its moments. Seems like
there oughta be a philosopher sitting under it, imagining the solution to world
peace or something. (Of course the bird droppings might provide an insight of
their own; makes me wonder what really hit Isaac Newton: say you’ve discovered
gravity and you want to tell the world: do you tell ’em the most likely possibility
— sparrow doo-doo — or clean it up and invent an apple encounter?) 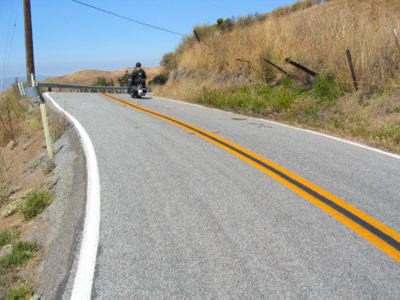 This is about three miles into my walk — the halfway point if I’ve got a lick
of sense. Nothing like the rumble of a Harley to wake up everything for a half-mile.
I’ve always bought into the Harley mythology — man, machine and the freedom
of the open road — but I’m changed by the experience of having one pass within
10 feet of me, the V-twin engine replacing the sound of breeze and songbirds.
Everybody should experience the thrill of acceleration that only a motorcycle
can provide, the sensation of bending into a curve and hitting the gas. I recommend
they do it in New Mexico. (This rider, to his credit, was trying to keep the
beast as quiet as possible, which is to say, buffalo-stampede level.). 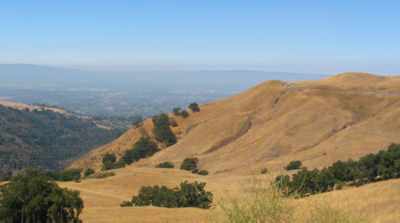 San Jose is off in the distance. Too bad they don’t have camera filters that
can see though smog. 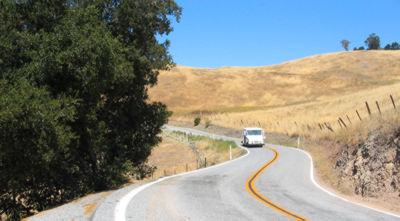 We get about two cars an hour along this road — it’s refreshing to see that
one of them is a mail truck. Not exactly the gloom of night up here, but at
least somebody’s taking care of business rather than taking in the view. 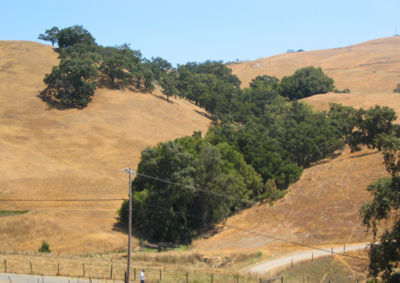 More trees. These hills are dotted with little springs, which aren’t all that
hard to find. All you have to do is go looking for some trees.

Wish I could get more pictures of the birds up here. They all fly away long
before I get a chance to get ’em in the frame. This one forgot its caution long
enough for me to squeeze off one shot. If only I’d have waited another second:
when it flew away it revealed amazing blue-and-white plumage. Some days I see
vultures … one morning I swear they were stalking me. You know, large mammal
walking alone, a carrion eater assumes its a straggler from the herd left to
fend for itself. I look up in a tree and see three or four birds with huge wingspans
fly onto the top branches, then take off and start circling. Glad I had a strong
heartbeat and a water supply.

Hawks and other raptors are constantly floating on the thermals — casting
these big shadows that move across the ground at uncanny speed. Sometimes the
shadow will darken the kitchen floor if the window’s open and the angle’s just
right. Takes a little getting used to. 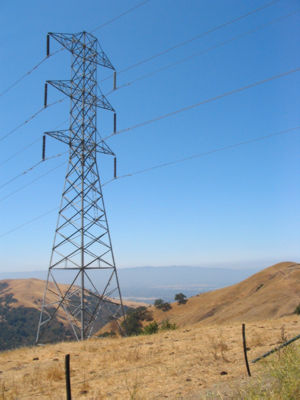 So I’m walking along and hear this buzzing noise … no bees or hornets nearby,
then I realize: powerlines. You sorta need something like this amid so much
beauty to remind what makes it possible to live in places like this without
the elements and predators killing us off. 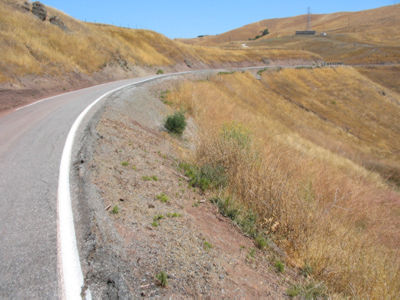 It looks brown and dead but these hillsides are very much alive. Little ground
squirrels are constantly darting about — too quickly for my slow reflexes to
get one in the picture. Also lots of little lizards, and of course many more
birds. 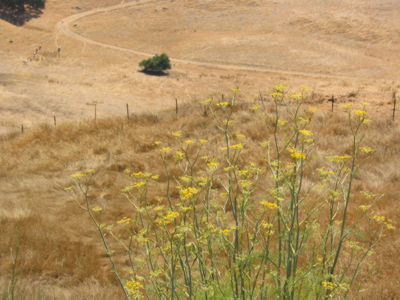 One of these wildflowers has a bee crawling around on it, I promise. 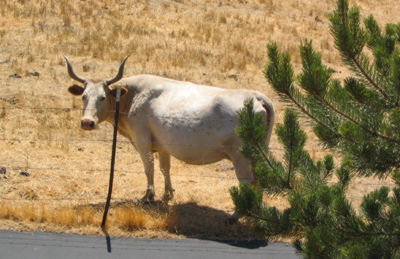 I post cow pictures at the slightest provocation. I liked this old gal because
she had horns — at least with this species you can see the darn things. 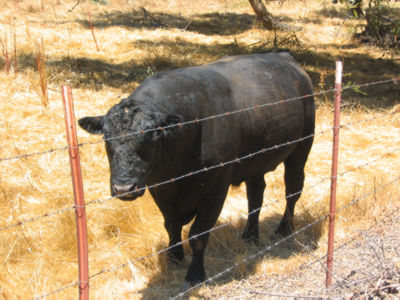 This immense Angus bull didn’t care much for me taking his picture. First he
snorted at me, then bellowed at me, then started scraping his left rear hoof
along the ground, just like bulls do just before they charge — at least in
all the bullfight movies I’ve seen. I moved along at that point, sensing trouble
if he’d seen the same movies. 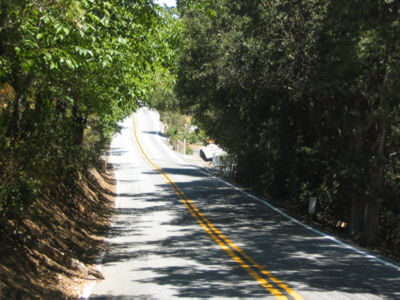 This is how you can tell you’re in the country: if the trees form a tunnel
over the road. 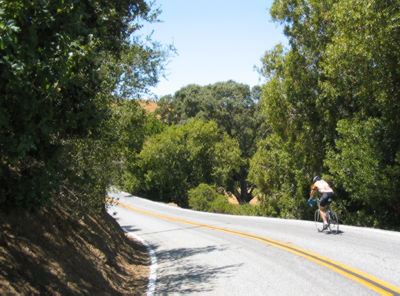 Passing bicyclists always make me wonder if I should get me some wheels. Riding
a bike is fine if you have the scenery memorized, I suppose, but every walk
I take is a little different. I saw a coyote the other day that I’d have never
seen on a bike. On foot I can hear cars coming from a half-mile away so there’s
plenty of time to switch to the safest side of the road (I give cars all the
room I can because it seems idiotic not to). It’s true that you can can see
a lot more scenery because a bike is about three times faster than walking,
but you miss a lot at that speed.

The things you see along the road: This is the rubber exterior of a car’s bumper.
Right behind a guardrail, which is probably what separated it from the car it
was previously attached to. 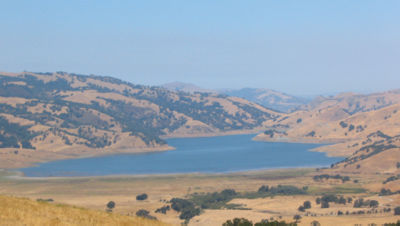 This is one of the reservoirs that ensures people in San Francisco have drinking
water. One thing I learned from a book about the construction of the Transcontinental
Railroad was that the Sierra mountain passes to the northeast of us are some
of the snowiest places on earth — so snowy that the builders of the railroad
had to erect awnings over the rails through the mountains to keep the railway
clear. Otherwise the winter blizzards would make the railway impassable every
few days. It’s the same weather phenomenon that made life hell for the Donner
Party. When all that snow melts, it pours down into rivers and valleys on the
California side of the range, where clever engineers have built dams, aqueducts
and reservoirs to catch as much of it as possible. If not for that snow, nobody’d
be able to live here. Another reason to like snow, so long as it’s a hundred
miles away.

Even with my New Balance shoes, my socks made of synthetic fibers, my hat
built in a Malaysian sweatshop, I can’t help thinking that when I’m out there
walking I’m doing something humans have always done. People have not always
flown in airplanes or driven cars, but as long as they’ve been able to stand
up straight, they’ve been walking (and their feet have resented it). For some
reason that makes it seem worth doing.

4 comments for “Walking the walk”