When we first came up the hill to our new place, we were fascinated and amused by these signs saying “Marsh Rd. Closed” because some enterprising delinquents had painted “Dead Bodies Found!” across them. 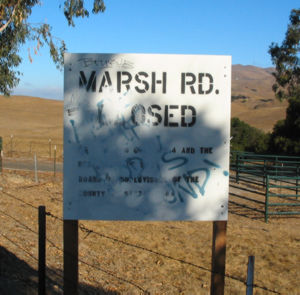 Some enterprising do-gooders tried to clean up the signs but you can still see the “ND!” at the end of this one.

I asked the landlord what was up with those signs, and he said, “oh, some murder 20 years ago — a body got dumped back there.”

Lately I’ve been passing the sign on my morning walks, and going about a mile and a half down Marsh Road. 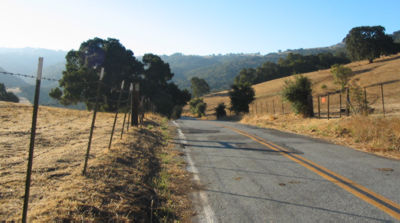 The road is quiet and scenic, with hardly any traffic. Hard to believe anything ontoward could’ve happened out here. 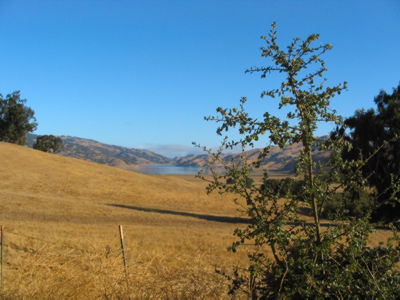 That’s the Calaveras Reservoir off in the distance. I’m basically down at valley floor level here.

By now you’re thinking, “get to the good stuff, what about the murder?”

OK, if you’ve seen the movie “River’s Edge” you already know about it: Co-stars Crispin Glover and Keanu Reeves are pals of this spooky, twisted teenager who flips out, raping and killing a teen-age girl and dumping her body out in the countryside. What made the movie really disturbing is what happened next: The killer goes back to his school and brags to all his friends about how he killed this girl, and he takes his friends out to view the corpse in the woods somewhere.

All this really happened, except it wasn’t in the Pacific Northwest — it was in Milpitas, the town right down the road from us. Some guy at the local high school raped and killed a teen-aged girl and dumped her body in a ravine on Marsh Road. 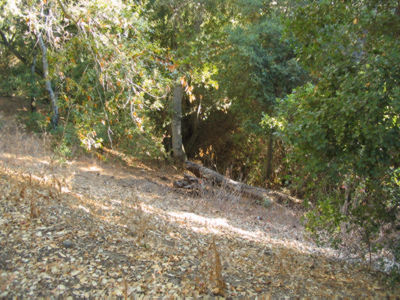 Here’s one of the ravines I walk past. There are lots of ravines out here so I doubt it’s anywhere near the fatal spot.

The guy who killed her really did go back to school and brag to his pals that he had done the deed, and had brought some of them out here to look at the body. It lay there for several days before it occurred to somebody to call the cops, who stopped a carload of local high school students on their way up to view the body. I suspect the perp will remain incarcerated for a very long time.

As for Marsh Road, it became a notorious party hangout for local teenagers. Sometimes things got out of hand and the locals complained. 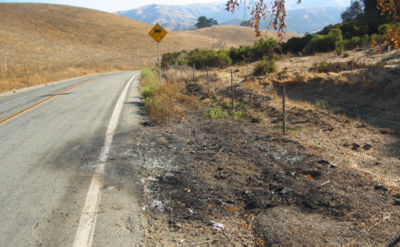 My understanding is that a car fire — here’s the burnt spot — was the final straw: county authorities declared the road closed to the public and put in this gate so that only authorized vehicles can pass. 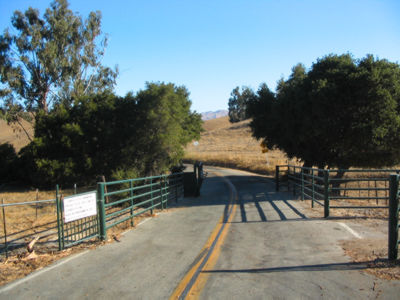 So that’s the story of the Marsh Road murder.

47 comments for “A fatal turn down the road”