If you’ve been stopping by long enough, you know the three things I’m apt
to write about: being outdoors, listening to rock ‘n’ roll and gawking at cool
cars. I got a chance to experience all three Saturday in downtown San Jose,
which is having its first-ever Grand Prix race this weekend.

The car race has to be outdoors, and only cool cars are allowed to race. That
much is obvious. The rock ‘n’ roll connection is more subtle, until it, too,
becomes obvious. I noticed it as soon as I passed through the gate and started
walking toward the race course. A high-pitched roar approaches from the right,
getting louder and more intense as the car gets closer. The deafening blast
hits its climax just after the car passes (sound traveling slower than light,
you know) and I notice an adrenaline surge that feels exactly like standing
in the front row of a really loud rock concert when the rhythm guitarist is
pounding out his power chords.

That realization guaranteed I’d get my 35 bucks worth, though I never saw any
actual races — just race practice and qualifying runs (there was only one race
Saturday and I had to be somewhere else when it started … naturally I didn’t
know this until after I’d bought my ticket and had been inside the race grounds
for a half-hour). The real race happens today, but watching it is hardly necessary.
In fact it’s slightly beside the point.

The best place to see a grand prix race — if you care about the actual competition
— is from a couch or barstool, safe from the noise, the sun, the exhaust fumes,
and secure in the knowledge that well-informed commentators will keep you apprised
of all critical developments and will provide replays of the really cool crashes.
You get none of this at the actual race; either you pay double for a grandstand
seat and you’re rooted in one place (and missing nine-tenths
of the action), or you buy a general-admission ticket and you wander along the
race course, realizing you can’t see squat through the fence and would’ve been
better off ponying up for a grandstand ticket.

Race fans come to the track anyway because a big race is a big event, like
Fourth of July fireworks. Happens once a year and they go for the experience
of being there. And their brains will store the experience of the guitar-chord
adrenaline rush to provide a little context when they’re watching races from
the couch or barstool.

At least that’s what I think. I took my camera long, of course; the highlights: 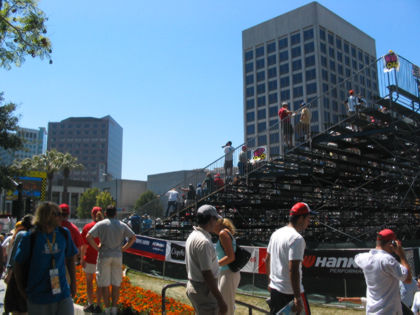 Race organizers set up a bunch of grandstands along the race course,
which goes for just over a mile through downtown San Jose. This is one of the
smaller sets of bleachers near one of the sharp turns. Racers can do two interesting
things on turns — pass other racers or crash — hence the necessity of having
people nearby to watch it happen. 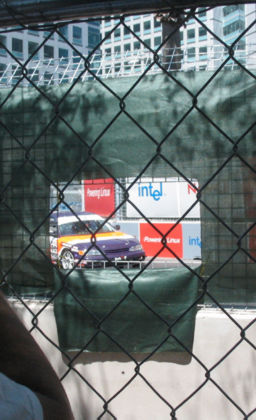 The fence is the permanent reality of having a general-admission ticket. People
in the grandstands have giant-screen televisions to keep ’em up on the action
but here at ground level, all you can see is cars ripping past at impossible
speeds. This is one of the first cars I saw in a sports car-class practice run.
In the sports car class, the cars are pretty much like the ones you’d see on
city streets, but with the interiors ripped out and the mufflers removed. They’re
plenty loud but not nearly as fast as the open-wheel racers in the grand prix
class. 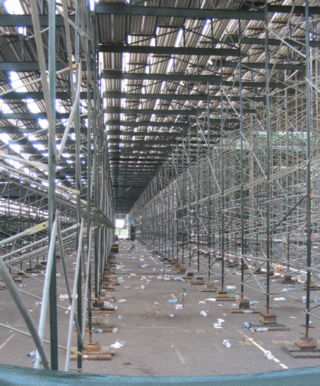 The litter-intensive underside of the main grandstand. Imagine what it looks
like on race day.

The second event was a practice run by "vintage" stock cars — ones
that you might’ve seen in the 1980s if you went to NASCAR races back then. The
San Jose track has a long straight-away that takes a mean U-Turn which forces
the cars to slow to a crawl. Normally the cars are zipping by so fast that I
have a hard time getting a picture with a car in it, so I went down to this
turn to see if my luck would improve. The car’s close enough that you could
almost spit on the windshield from here, which is one of the nifty things about
buying a general-admission ticket. The cars pass right next to you, something
you’ll never experience in the bleachers. 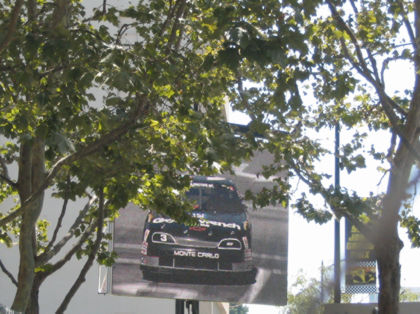 One of the many giant-screen TVs placed strategically around the race course. 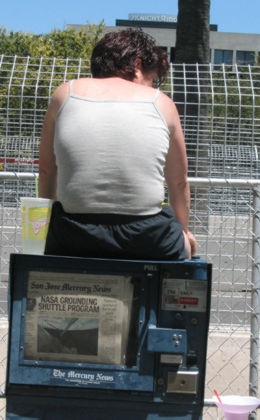 Hey look, it’s somebody sitting on a Mercury News box! (It’s Friday’s paper,
alas.) You can’t really see it in this picture, but the Knight Ridder sign above
the Knight Ridder Building is also at the top of the frame. (Knight Ridder is
the heavenly father of the Mercury News and many other fine newspapers that
your grandparents read). See, the Merc is always in the business of providing
a better perspective on the news, even at the Grand Prix! 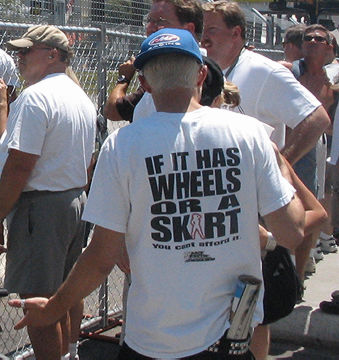 All men know this and yet they are powerless to act upon this knowledge.

(The T-shirt says "If it has wheels or a skirt, you can’t afford it.")

After awhile the really fast grand prix cars show up — these are qualifying
runs for Sunday’s main event. Normally you have to shoot though two rows of
fences so the pictures aren’t particularly satisfying, but there was one break
in the main track fence here, so I had only one fence to shoot through.

The view improved a bit when I figured out I could rest my camera on top of
the fence here and aim it down at the track. Then the trick was to time it so
that a car was in the frame when I clicked on the shutter button. This is the
best picture I got, which sorta sums up the difficulty in photographing car
races: It’s all about the motion, and photography is all about stopping the
motion for a fraction of an instant. Professional photographers have all sorts
of tricks to make racing pictures interesting but the first requirement is being
next to the track with a wide range of perspectives. The second requirement
is knowing what the hell you’re doing. Lacking both of these prerequisites,
I don’t feel so bad that I managed to get one car in the frame out of a dozen
attempts. 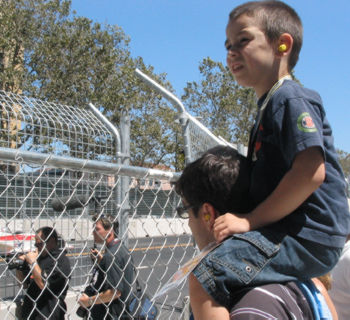 Kids can get a better perspective if they’ve got strong-shouldered grownups
to help out. 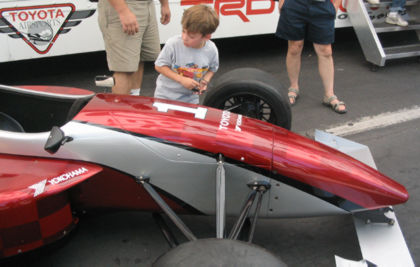 Because it’s not actually race day, it’s a good time to check out all the exhibits,
most of which have to do with cars. I’m guessing I looked pretty much like this
kid the first time I saw a race car up-close. 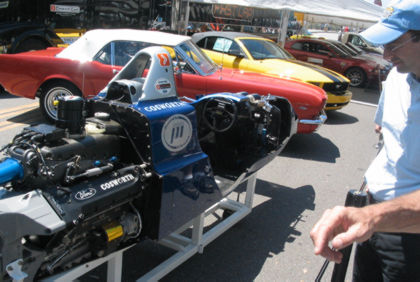 The ever-popular Cosworth Ford race-car cutaway, with other a couple Ford Mustangs
nearby. It’s uncanny how Ford has milked the Mustang mystique for 40 years. 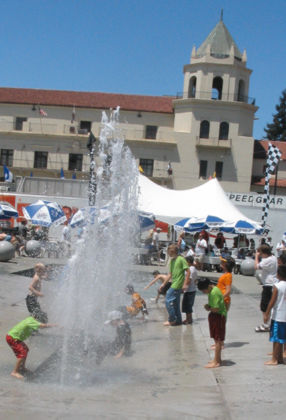 The race goes right next to San Jose’s convention center, which has been filled
with all manner of race-car coolness. Oblivious to all this automotive goodness,
kids make good use of the fountain outside the convention center. 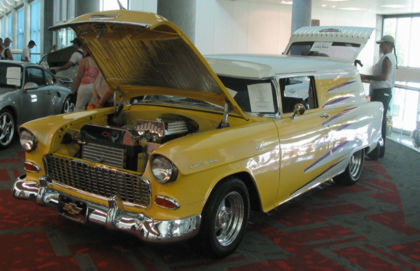 In the convention center foyer, it’s one of my favorite classic cars: the 1955
Chevy Nomad two-door. 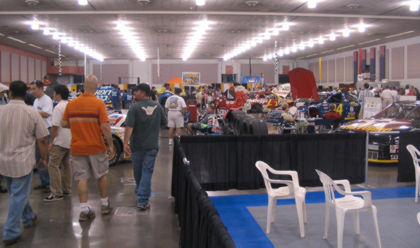 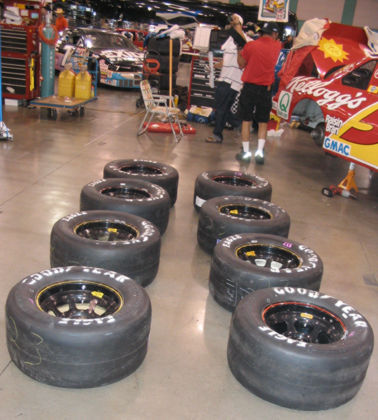 Goodyear Eagle racing tires. Ever wonder why race car tires don’t have tread
like your car? It occurred to me awhile back that it’s simple physics: the more
rubber in contact with the road, the better the traction. Grooves in a tire
mean less rubber against the road, hence less traction. The grooves channel
water away from the tire, making a car safer to drive in the rain. Some races
are rain-or-shine events, which obliges pit crews to switch over to "rain"
tires, which have those grooves, allowing a measure of safety racing on slick
tracks (they still go too fast for common sense, but it wouldn’t be a race otherwise). 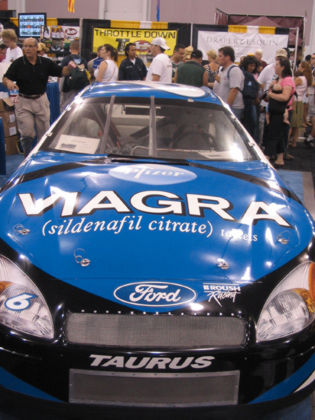 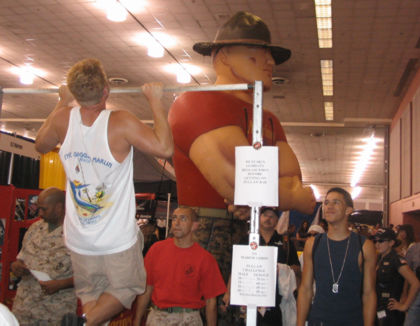 The Marine Corps’ "chin-up challenge" attracted a bunch of muscular
guys. A T-shirt went to anybody who could chin up to this bar 20 times; this
guy had a surfer’s build and looked plenty strong enough to do the whole 20.
He quit after five, which made me wonder if he looked down at those Marines
starting to like the looks of him and started wondering if the grand prize was
an all-expense-paid trip to Baghdad.