On Wednesday it came time to check out Zion Canyon in Zion National Park.
Having seen the Grand Canyon from the top and Bryce Canyon from the middle,
it seemed only fitting to see Zion from the canyon floor. Zion is a huge park
with plenty to see on its backcountry trails and slot canyons, but just as you
can’t really "do Yosemite" without swimming among the schools of tourists
in the Valley, you can’t "do Zion" without a trip through the Canyon.

There are crowds at canyon-floor level, but all the action’s happening up on
those steep canyon walls, colored a hundred shades of brown, black and gray.
When you look up, you might spot a hiker high atop the canyon rim, but otherwise
you won’t be troubled by puny humans. Shuttle buses make regular stops at trailheads
throughout the canyon — one way to do the canyon in a day is to just get off
at each stop, wander around till you’re ready to see something new, and wander
back to the shuttle stop and do it all over again at the next stop.

We took the shuttle to the last stop and walked about a mile of paved trail
to the end of Zion’s famous Narrows Trail. The Narrows Trail obliges hikers
to wade through miles of cold, occasionally deep water. It’s considered one
of the great scenic wonders of the Southwest — it’s definitely on my list for
a future Zion visit. 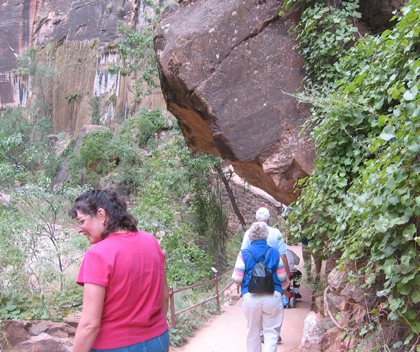 Melissa takes in the sights along the paved trail toward the Narrows. 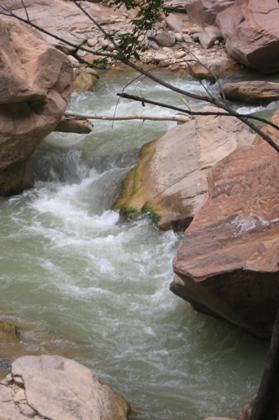 The Virgin River doesn’t seem like much, but it helped carve out the is whole
canyon. 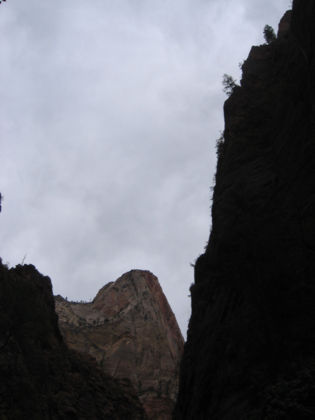 Towering canyon walls near the entrance to the Narrows. The sky was cloudy
when we arrived — the views got much better after the clouds started to clear. 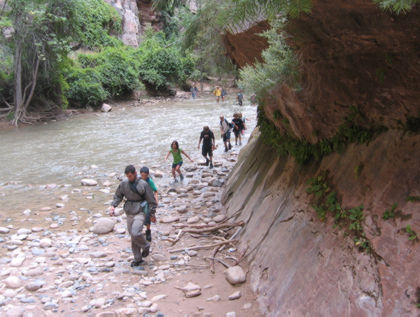 A guy leads a large youth group across the river after their Narrows adventure. 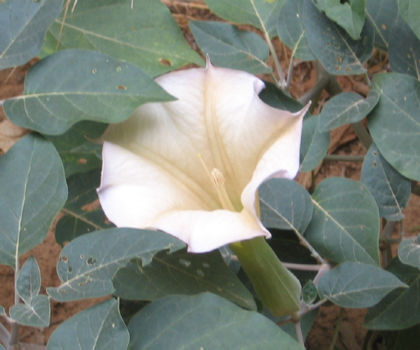 The canyon is full of interesting plant species — trees, bushes, flowers.
You’d never know it’s in the middle of a desert. 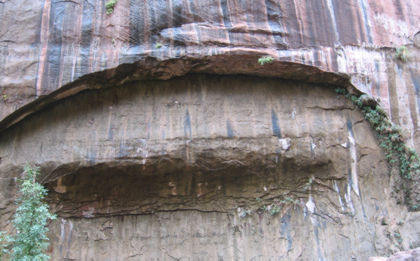 Stripes on the canyon walls come from water that seeps into the rock high above
and escapes via small cracks. In the winter the water freezes and creates large
cracks in the walls, speeding the erosion process. 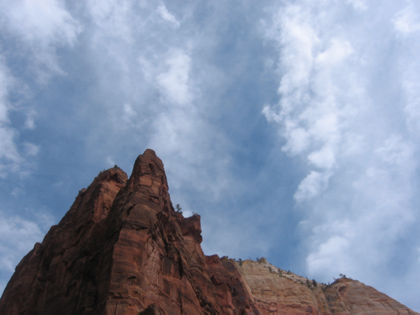 Skies start to clear above Angels Landing; we could barely make out hikers
on the canyon rim. This is at a shuttle stop called Big Bend. It has no trails
nearby but from here you can just admire the vastness of the canyon rising to
the sky. Few people get off at this stop, but those who do are treated to perhaps
the truest canyon-floor experience. 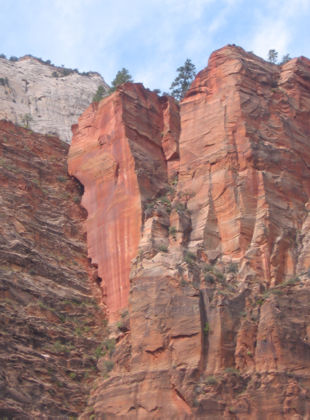 One of the large cracks between columns of rock is visible here. 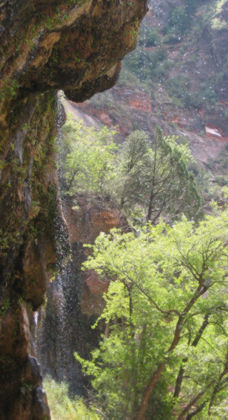 Water droplets pour from the cliff side at Weeping Rock. A tour guide told
us the water can take more than a thousand years to reach the canyon walls. 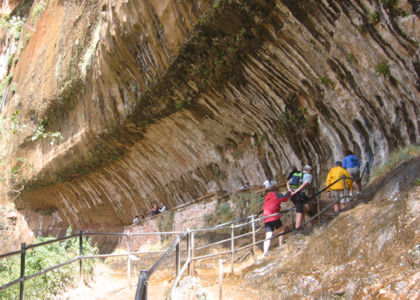 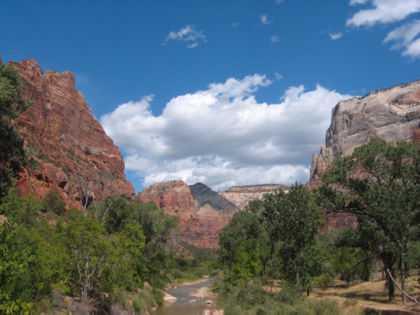 The clouds cleared, creating excellent vistas. This is looking up-canyon near
the Zion Lodge. 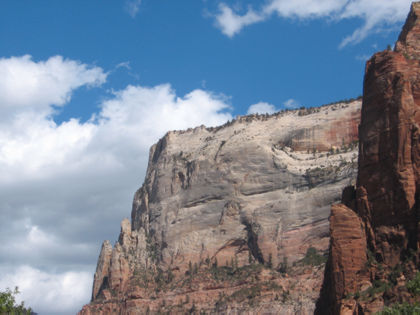 A sampling of the many rock colors — grays, oranges, browns among them. 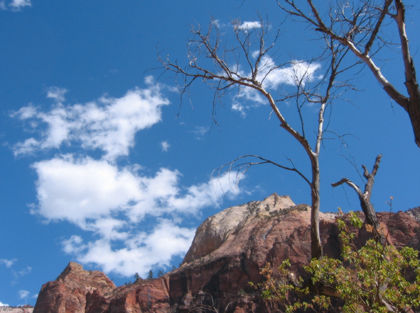 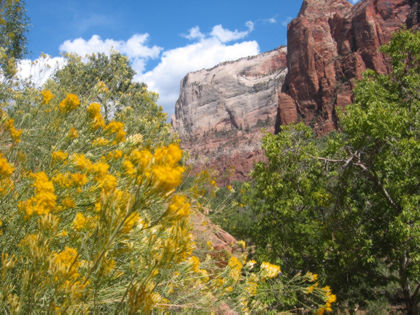 A lizard paused to pose for a pic. 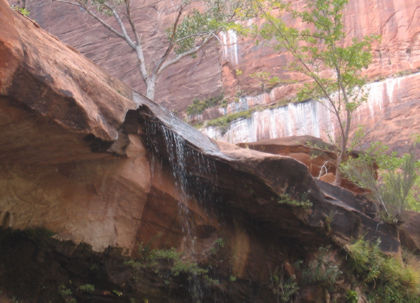 A small waterfall near the Lower Emerald Pool. Probably more interesting in
the spring, when the water runs stronger. 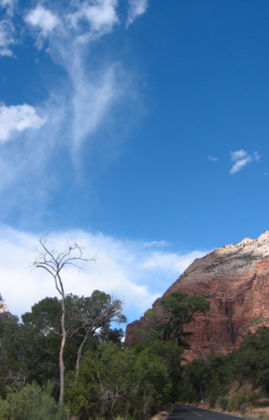 Clouds do a dance near a site called Court of the Patriarchs. 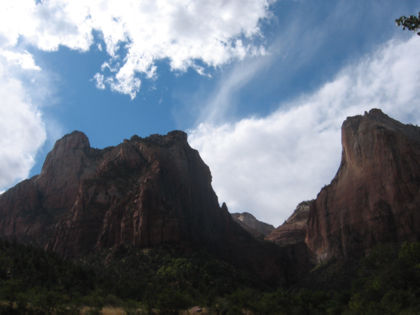 A couple of said Patriarchs. They’re named after famous men of the Old Testament. 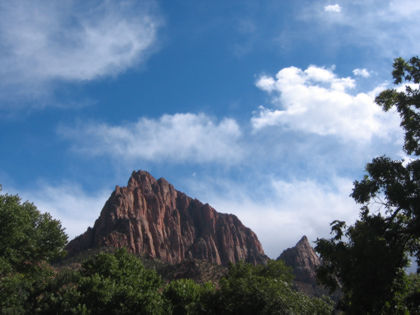 We were done touring the canyon and walking back to the car when I looked up
and saw this scene behind the Visitors Center. 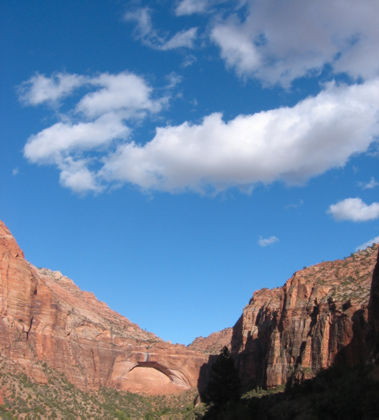 An arch in the rock near the road taking us out of the park.

We ended up passing through the park three times in our travels — initially,
the tourist crowds and the steep canyon walls felt like Yosemite Lite, but as
the first impressions wore off the charms of the place started to grow on us.
An amazing place, and we saw a mere sliver of it. Can’t wait to get back and
see more.