It was the 12th of September in 2001, the day after the 11th, and I was driving to work to fill a newspaper with followups. I lived Alameda County, California, and every day I crossed a minor mountain pass and descended into the wall-to-wall sprawl of Silicon Valley at Fremont, a burb that became a city of 200,000 people.

It was the same view I’d seen a hundred mornings before, but this time it was different. As I wondered what could’ve possibly possessed those clowns to fly jetliners into skyscrapers, I didn’t see Silicon Valley’s smog-inducing sea of sameness. This time I saw an ocean of ingenuity in all those office parks: people designing faster microchips, gleaning the secrets of DNA, making manufacturers more efficient. 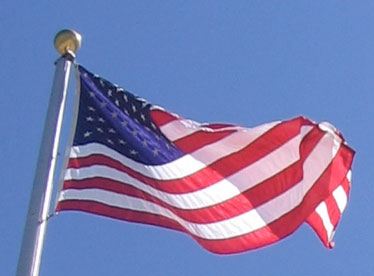 I’ll grant you those 19 guys were clever, daring and devoted to a cause. And there probably were thousands more just like them scattered around the globe. But they were outnumbered 50-to-1 in Silicon Valley alone, and the Silicon Valley types were building stuff, not blowing it up.

The lesson of human history is that the builders keep building and the bomb-throwers get blown up. That was the world I saw that morning on my way to work.

In America, we build. Not just houses, factories and fast-food joints. We build ourselves.

We’ve gotten ourselves into terrible jams in the 235 years since the Founders signed the Declaration of Independence. A Civil War, a Great Depression, two World Wars. Today gutsy young Americans are dodging bullets on our behalf, just as they’ve done in all our wars.

I’m not into simplistic, flag-waving patriotism that hollers “my country, right or wrong.” Everybody loves their country, which makes us all easy prey for politicians who’d use our affection for our homeland to fight their ill-advised wars. I’m even a little embarrassed by fireworks when I think of all the people who’ve huddled in bomb shelters as American-made rockets rained down on their neighborhoods.

Yeah, the history books are full of our nation’s screw-ups. We owned slaves, we wiped out Indian tribes. Up until about 1965, liberty meant “you’re free if you’re white.”

Two generations later, descendants of slaves are among our most popular personalities, and our president is a half-African with “Hussein” for a middle name. Try to imagine another country with 300 million citizens where that could happen.

We were the country that dumped monarchy into history’s landfill. We proved that people could elect their own leaders and build a productive, prosperous society despite all the divisions — religion, ethnicity, class — that bedevil us. Making racism obsolete will be our gift to the world. We’re not there yet, but it seems doable.

Update (summer 2013): When I wrote this in the summer of 2011, my prospects looked grim: 49 years old with no job and a home-based business built mainly on a suspicion that I could make it work. Today I have a thriving freelance content business that makes me proud to be an American on this Fourth of July — because impossible is still doable here.

1 comment for “What I think of the Fourth of July”