There’s a scene in “American Splendor,” the story of underground comics hero Harvey Pekar, where Pekar is standing on one of those caged pedestrian bridges high above a big expressway. Pekar’s life and his outlook are so wretched that the first reaction is to think: why doesn’t he just jump? He can’t, of course, because of the chain-link enclosure, which roughly symbolizes his life: Pekar sees a world that should be his, but he can’t get there because he’s stuck behind this fence.

The real Harvey Pekar and his wife, Joyce 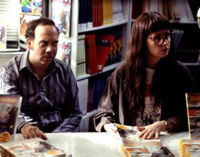 Paul Giamatti and Hope Davis as Harvey and Joyce.

Critics and film festival fans gushed over “American Splendor” last year, when the film raked in major prizes at Sundance and Cannes. It’s out on DVD now, which in a way is a much better way to experience the movie because all the DVD extras — the comments track in particular — tell so much more of the story than shows up in the actual movie.

I have my own biases for watching the movie: I wondered if Pekar’s story could shed some light on why people keep buying comic books after, say, age 12. The older I get the more I wonder why a small fraction of the population — geeky, antisocial guys mostly — never outgrows these things.

The movie’s directors, Shari Springer and Berman Robert Pulcini, explain this phenomenon by going straight to the source: part of the movie is the real Harvey Pekar explaining what’s happening in the fictionalized part of the movie, where Paul Giamatti portrays the young Pekar (“He doesn’t look like me,” notes the real Harvey, whose raspy voice bears the burden of a life whiled away in a sterile Veterans Hospital file room). He’s part crank, part genius — a comic voice of authority on the subject he knows best: his own strange self.

The real Pekar lives in Cleveland with no prospects beyond his job as a hospital file clerk. As the movie opens his second wife is leaving him. His throat has a polyp that makes speaking painful. In a hilarious grocery store scene, Pekar has a revelation while waiting in line to pay for his Spaghetti-O’s: It’s time to do something with his life.

Pekar decides to start a comic book about the odd interludes in his life. Problem is: he can’t draw. His life may be a wreck, but he has one good fortune: an old friend is Robert Crumb (James Urbaniak), creator of the “Mr. Natural” comic book character. Pekar scribbles his words on pages, illustrates them with stick figures and hands them over to Crumb, who says, “these are good.”

From thus springs the comic book “American Splendor,” which ironically exposes the splendor-free existence of Harvey Pekar. He writes about the everyday annoyances of his life in the hospital file room, and his colorful coworkers. Over time the comic develops a following; one of its fans is Joyce Brabner (Hope Davis), a woman working in a comic book shop in Delaware. Her whirlwind romance with Pekar is one of the funniest sequences in the film — she’s just as neurotic as he is, but unlike all the other women he’s known, she won’t toss up her hands and toss Harvey out of her life. As the real Harvey notes, “I met my match in Joyce.”

Another of Pekar’s fans is David Letterman, whose cast of recurring oddballs made his “Late Night” one of the funniest things on TV in the mid- to late ’80s. Dave invites Harry on the show, where his condescending tone comes across as more disturbing than humorous. By this far along in the film we’ve come to identity with Harvey’s endearing weirdness, and it’s obvious that Dave is exploiting it for easy laughs. Later the real Harvey seals the deal: None of the appearances helped his comic book sales; Letterman’s fans weren’t laughing with Harvey, they were laughing at him. Creepy.

In the commentary on the DVD, though, Harvey reveals himself as a far more savvy media player than the movie portrays. He says, sure, he was there for comic relief and he was doing a shtick — which culminates with Harvey unleashing a profanity-laced screed against Letterman and his show’s corporate sponsors. Harvey might’ve seemed like a useful idiot, but he got the last laugh on his last “Late Show” appearance.

I admit I was charmed by how “American Splendor” neatly integrates comic book imagery into scenes, and by how the real Harvey deftly narrates the fake Harvey’s cinematic adventures. And I was amazed at how Giamatti seemed to nail Pekar’s quirks. That stuff brings goodness to the movie, but the greatness comes from Harvey himself. By the end of the DVD, which tacks on accounts of Harvey getting his just due on the film festival circuit, I was thinking of that scene on the pedestrian bridge and how Harry explained what keeps him going: If you hang around long enough, something’ll turn up.

Harry becomes a forgotten American who wins in the end. That spirit of against-all-odds optimism — Harry’s got deep, deep problems but he soldiers on — says something about the splendor in all of us, and not just Americans.