Yes, we’re moving again. A week from Monday we’ll be in a new place.

This’ll be our third address since coming to California in the fall of 1999. The first two places have been in apartment complexes; nicely appointed, brand new and about as interesting as dry toast.


As long as we’ve lived here, I’ve been fascinated with driving mountain roads in the ranges around Silicon Valley. You see about an even split of tech zillionaire estates and horse farms. Either one would be fine to live on, but lacking the requisite millions required to buy land in these parts, I figured it’d be interesting to see if any of these hill dwellers are renting cottages that a working-class couple like us could afford.

Last Sunday I did some poking around and found an amazingly interesting place just 10 miles from the Mercury News, 20 miles closer than our current abode. It’s a two-bedroom cottage built over a workshop about five miles up into the hills overlooking San Jose. I’m told the city lights are visible from up there.

I mentioned it to Melissa and she said, in effect, “OK, let’s think about it.”

By Monday, Melissa was determined to have a look at the place, so we dropped by for a look and it was, as they say, love at first sight. There’s an actual corral on the property with two horses, and plenty of places where Melissa can plant flowers and otherwise dig in the dirt. Here’s what it looks like: 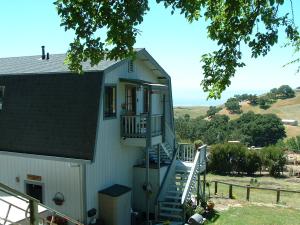 The one downside to this bucolic setting is that my Internet connection will be dialup. I could pay way too much for a slow satellite connection but I don’t need to be online that badly. What I need most these days is an excuse to do something else with my life besides cruise the Web. I’ve been hopelessly hooked on it for going on eight years, and it’s high time to, uh, dial that back a ways.

That’s one of my motivations for retiring Prints the Chaff, which developed a small but loyal following. I felt bad about bailing on all the people who’ve encouraged me all along, but the prospect of spending every morning of my working life combing the web for stuff to write about just made me more and more depressed in the past few months. It got to the point where I just didn’t want to do it anymore.

I still need an outlet for writing and photography, though, so I suspect I’ll keep posting words and pictures here now and again.

Just be patient, as I’ll be cruising in the slow lane.