Driving up the Coast Highway from Monterey to the San Francisco suburbs is
one of my favorite ways to kill a day off. Melissa and I hadn’t done it since
last summer so we decided to go for it again yesterday, for old time’s sake.
On Tuesday I hiked for four hours through Sunol Wilderness, which I
had been to a few weeks back and meant to explore in more detail. The place
rocks. But first, the road trip. 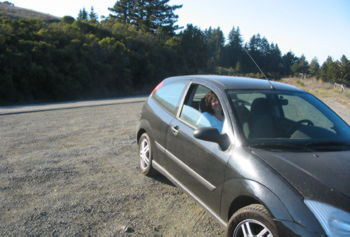 Melissa in the co-pilot’s seat, parked on Skyline Drive overlooking Silicon
Valley. This is near the end of the drive, about mile 220 in a 280-mile loop
that went south to Monterey and north to Pacifica, then back down California
Route 35 atop the Santa Cruz Mountains, then down to Saratoga and back home.

To get things back in order, let’s get down to the Monterey Bay. 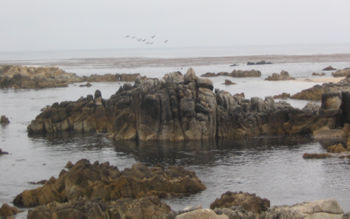 This is actually near Pacific Grove, the next town south of Monterey. We clambered
down on the rocks, hoping to see some starfish or octopi in the tidal pools.
The coast was still clouded in, so no brilliant sky for a backdrop. Still, not
bad scenery for a Monday. 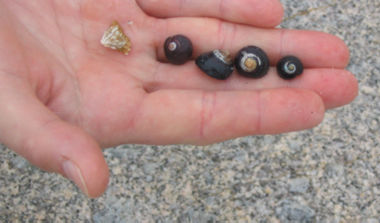 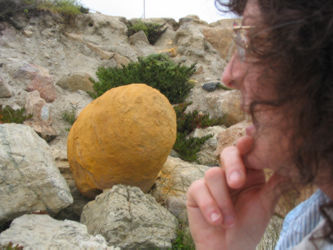 Remember the Chicken Heart That Ate Cleveland? This appears to be one of the chicken’s eggs.

Monterey has turned Steinbeck’s Cannery Row into an appalling tourist trap,
which we skipped. Instead we headed over to Fisherman’s Wharf for a taste of
what’s left of the Monterey that matters. You know, where people take boats
out into the ocean, scrape the bottom with nets, bring back seafood, sell it
to a distributor and hope to have enough left over after their boat payments
to buy a Filet o’ Fish at McDonald’s. 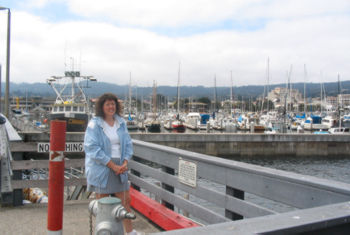 One of those big fishing vessels is right over Melissa’s shoulder in the marina.

The coolest thing about the wharf is this little greasy-spoon called LouLou’s.
It’s got room for about 12 people inside, not counting the four or so who work
there. 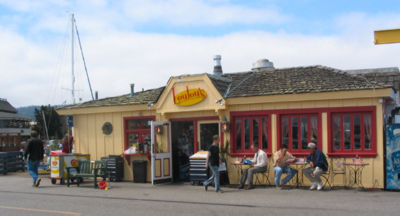 Our first-ever meal in Monterey was served at this very spot, though it was
under different management, I believe. In any case, the fish is fresh and tasty.
Service is quick, and the staff is way cool.

I had the fried calamari. Salty and tasty — who’d a thunk those little O’s
were squid tentacles? Melissa had the broiled white fish. Loved it. 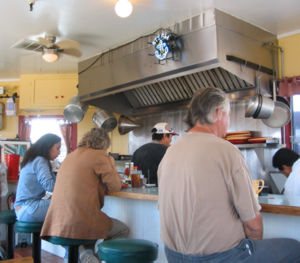 Remnants of the lunch crowd … everybody knew everybody else by name. Regulars.
Somebody left a box of Hostess HoHo’s on the counter. The proprietress vowed
she’d pop a couple in the deep-fryer — and she kept her word. 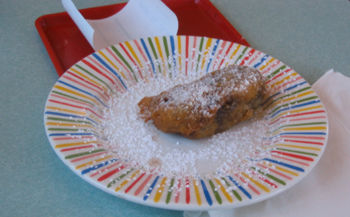 We must’ve exuded that an of people who are game for an experiment, because
the waitress handed us this deep-fried HoHo with our check. It was a bit rich
for my palate but Melissa loved it.

From there, it was on to Santa Cruz. Surf City. 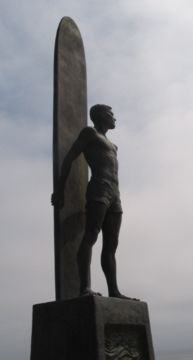 The Surfer Statue along the Santa Cruz coastline. This little spot gets the
best waves, and the best surfers.

The waves were breaking close to the cliffs; this guy was wearing a helmet
to avoid breaking his skull in a wipeout. 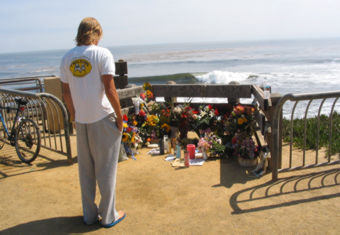 A tribute to a beloved local surfer who died recently. It was a guy in his
50s. Surfing draws people of every generation; it’s not unusual to see gray-haired
guys out there next to teen-agers.

After that we headed north again. We stopped at one of the public beaches and
waded into the ocean. Ankle-deep is plenty in this water, which isn’t exactly
ice cold but is chilly enough to wake up the road weary. I was feeling a bit
sleepy till my toes got a taste of that chill.

Waves doing what they do at the beach.

Those are the highlights of our little Highway One drive, though these few
pictures barely convey the splendor. A coast like this is worth a thousand pictures.

Next up: Sunol Regional Wilderness.

I brought my digi-cam to the park Tuesday feeling fully sick and tired of
the same old stately trees and majestic hillsides. Well, not tired of seeing them, just tired
of taking pictures of them. Turns out Sunol was just where I needed to be, because
it has two of my favorite things: water and rocks. 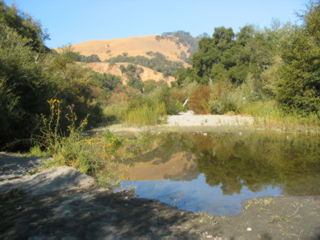 I started my hike along the Alameda Creek, which is barely deep enough to carry
a current at this time of the year, but can turn into a raging river when the
rains come. I noticed a rain gauge in a dry riverbed that went up to 12 feet. 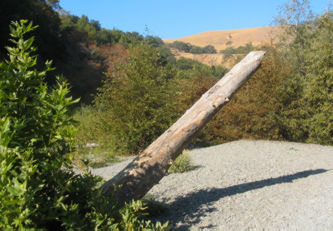 If, like me, your mind is in the gutter you will fully understand the need
to take and post this picture.

I was looking for an area of the park called Little Yosemite. When I got there
I did see some wild rock formations, though comparing it to Yosemite is a bit
ambitious. But even 10 percent of Yosemite is plenty amazing. 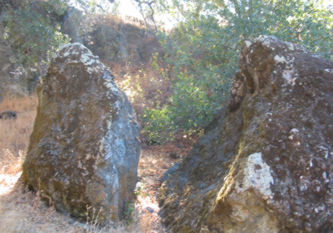 Rocks, many of them broken in half. This one looks like a Godzilla gave it
a good karate chop.

I saw a couple of these, apparently split by earthquake forces. 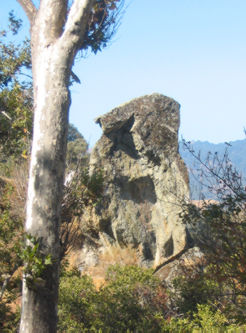 Another rock jutting up out of the ground — it goes up about 15 feet or so.
Wants to be El Capitan when it grows up. 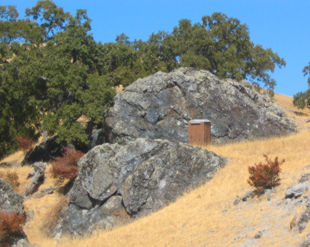 The hillside had these big bluish rocks jutting out of it. And a privy tucked
back in there for those who insist on privacy when they run back behind the
rock. 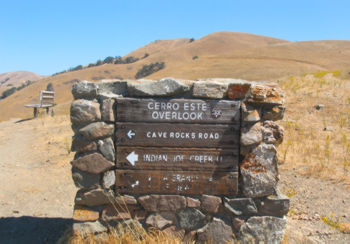 I had to huff and puff to get up here. It’s about 2000 feet up, and about four
miles into the hike. That’s the peak of the ridge in the background. 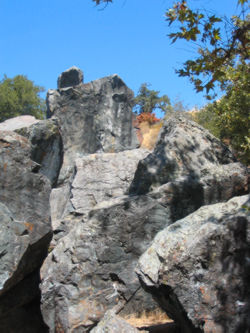 On the way down I came across this huge pile of huge rocks. I’m guessing it’s
crawling with climbers on weekends. I had it all to myself … but fortunately
I neglected to bring any climbing gear (on account of not owning any), so I
was free to walk on past. I have a hard enough time keeping my footing on level
ground … seeking out ways to lose traction and fall embarrassingly doesn’t
suit my style.

Sunol Wilderness is full of surprises .. great trails, stunning rocks, and
I covered perhaps a quarter of it. It’s on my return list, for sure.

3 comments for “On the road, on the rocks”