I had all day Saturday to kill so I dropped in on the San Jose Jazz Festival.
There’s no admission to the fest, so to some extent you get what you pay for.
So much attention goes into fundraising and cajoling bands to come to San Jose,
I suppose, that such things as program guides or maps of the festival are things
which you have to get along without. Well, if you’re too lazy and unmotivated
to ask somebody where such things might be found, which describes me to a T.
I had no idea, for instance, that there were at least three indoor venues
featuring interesting and wonderful jazz artists. Of course, sitting on the
couch back home in my Friday edition of the San Jose Mercury News was a complete
guide to the festival with maps and arrows and advice on the must-see acts.
Heck, anybody can find cool stuff that way.

So anyway, if you Googled San Jose Jazz Festival and happened upon this page,
be assured it is not representative of the mind-boggling range of talent that
appears at the festival every year. It’s just some stuff I saw on a Saturday
in the summer of 2005. 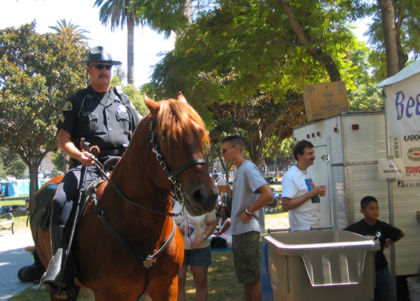 The first cool thing I saw was this cop on horseback riding his horse right
into a tent where they were selling beer. He only jokingly ordered a draft from
the tap. 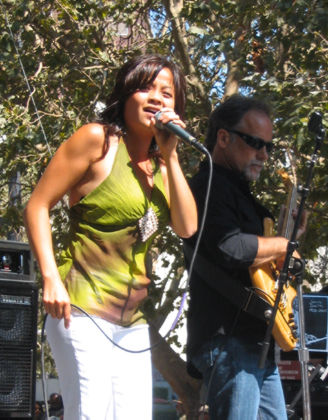 I wandered down to the blues stage, where Lara Price and her band were belting
it out. 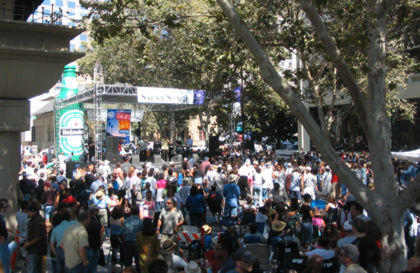 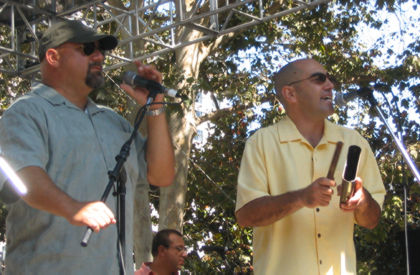 Vission Latina keeps the crowd grooving. I seem to recall the lead singer mentioning
he was from Cuba. 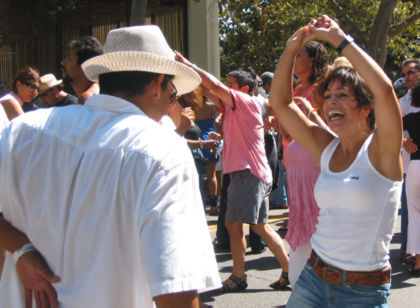 The crowd endorses the Salsa sound. 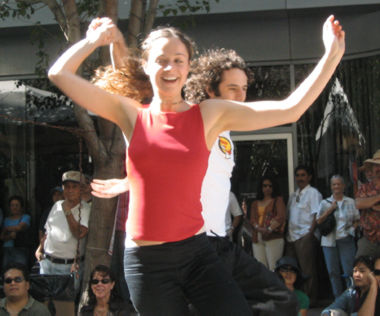 Over at the Big Band Stage, a bunch of people who’s great-grandparents were
into Benny Goodman keep the swing, well, swinging.

I got these pix sitting on the sidewalk about eight feet from the stage, which
is one of the great things about checking out the less-popular venues: you can
always sit up front and see the expressions on the faces of the performers as
they perform.

The Main Stage is roped off down at the front and you have to have a special
wristband to get in. I have no idea where to get the wristband, no motivation
to find out. The grounds nearby are full of people with blankets and lawnchairs
… it’s a nightmare to navigate so I end up avoiding the Main Stage. This is
Soul Live on stage; I’m sure I’d have loved ’em if I could’ve gotten a seat
up front. 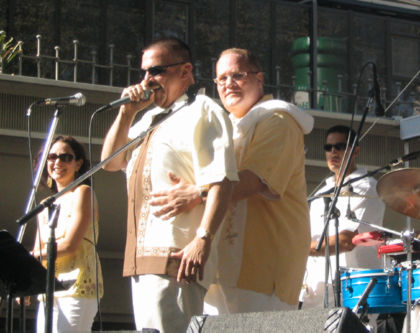 Back at the Salsa Stage, Eric Rangel y su Orquestra America have taken the
stage. One of Eric’s bandmates was doing one of those silly things bandmates
do because the lead singer is too busy singing to do what comes naturally, which
is to say, elbow him in the ribs or perhaps bop him in the jaw. He’s up there
singing and one of his cohorts is behind him running his hands all over him
with mock-homosexual ardor. It’s pretty funny until somebody takes a picture
of him doing it. 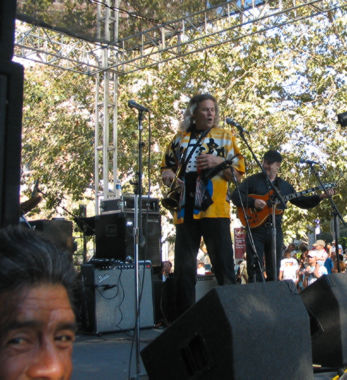 Back to the blues stage. Graying white guy wearing strange shirt: this is perhaps
the modern blues audience personified. 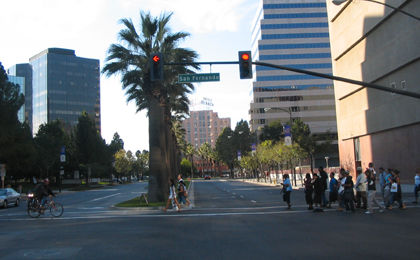 That’s the De Azna Hotel down at the end of the street. It’s where I spent
my first night in San Jose — quite a swanky joint, provided somebody else is
paying for your hotel room. 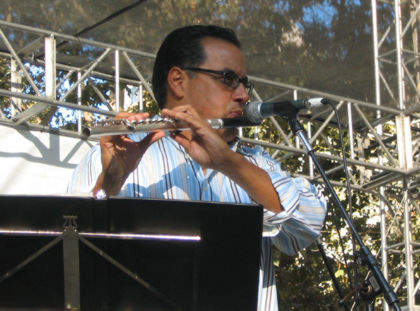 More Salsa Stage grooviness. I don’t recall seeing a flute in a jazz band before. 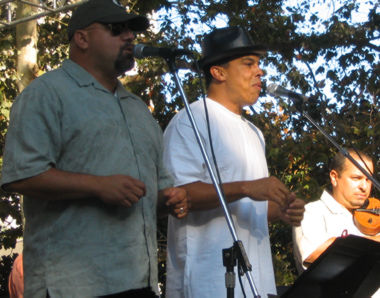 I’m not sure who these guys are, but they belt it out in Spanish with impressive
gusto. 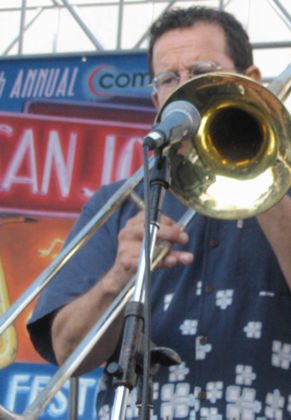 A man and his trombone at the Latin Stage. 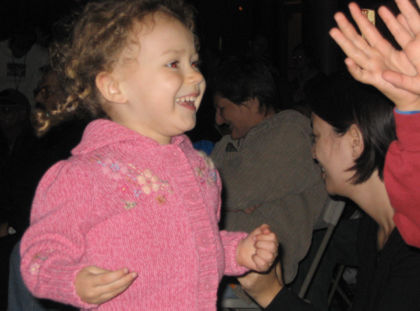 Back at the Big Band Stage, all the big bands had gone home but a Spanish/gypsy/mambo
flavored band called Alma Melodiosa got everybody moving for a segment called
Jazz After Dark. 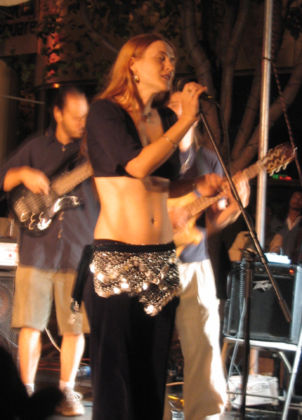 Alma Melodiosa is a great combo with pleasing eye candy in the form of this
backup singer who had these castanet-thingies draped over her nether regions,
providing backing rhythms as she grinds out fetching belly-dancer moves. I sorta
felt sorry for the lead singer, who had a powerful, haunting voice, because
obviously all the attention will be drawn to the gyrating babe to her left (who
was a fine singer in her own right, but I don’t think many people were paying
attention to her voice. Well, a least not the guys). 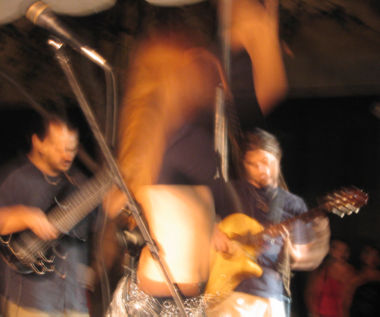 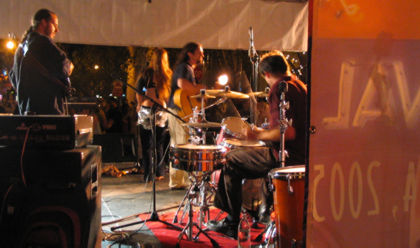 I’m sure there was more to see but at this point I’m jazzed out.

2 comments for “A jazz Saturday”