I wasn’t sure how many more trips down nasty national forest roads my ol’ 2000 Focus could stand. At six years old and 95,000 miles it had served me honorably and efficiently. No breakdowns, only one trip to the shop to fix some gaskets and replace some hoses, but I could sense fatigue in its automatic transmission and I didn’t want to have it die on me in the middle of a mountain range.

I’m a complete coward about buying somebody else’s car so I inevitably end up buying a new one every half-dozen years or so. It’s true that a car’s value falls by a couple grand the minute you drive it off the lot, but that’s the price of the unvarnished thrill of taking possession of a brand spanking new automobile with 42 miles on the odometer. Worth it to me, anyway.

These days cars are like digital cameras: there’s a zillion to choose from and each one requires you to give up a few things you want to get everything else. I wanted a vehicle to take camping in the woods, that’d get good traction on bad roads and in snowy mountain weather, that would have plenty room for all my car-camping gear, and would get good gas mileage to boot.

I could’ve gotten a pickup truck but they’re gas hogs. Could’ve gotten a full-size SUV but they’re cash hogs. Didn’t want to break the bank and didn’t want the car to break. That meant either a Honda or a Toyota. Toyota makes a really cool small SUV called the RAV4 while Honda makes its closest competitor, the CRV. I looked hard at both of them but couldn’t help thinking the car I really wanted was a marketing mistake on steel-belted radials: the Element.

Honda brought the Element to market in 2003 after doing intensive market research mong young white guys under age 25 with active outdoor lifestyles. Surfers, snowboarders, mountain-bikers, rock climbers — you know, the ones in the Mountain Dew commercials– were the Element’s target market. A strange thing happened, though: None of these guys wanted the car that Honda built so studiously on their behalf.

The new Elements were boxy and butt ugly to some people. They didn’t fly off the lots and the ones that did get sold ended up in the Mountain Dew guys’ parents’ garages. It’s a great choice for car-camping empty nesters: mega spacious, easy on gas (25 mpg on the highway), available all-wheel drive, mild sticker shock. And trusty Honda reliability.

I was sold. Especially after I went to carsdirect.com and noticed it was promising I could buy one at $2,000 below the sticker price. This savings allowed me to get the deluxe model (the Element EX) with all-wheel drive, automatic transmission and deluxe sound system with XM satellite radio (which is way, way cool). I picked out the car I wanted and sent some basic info to Carsdirect, which assigned a rep to me who called around and found a dealer where I could test-drive it. That dealer honored the Carsdirect price to the penny and the whole transaction went down with almost zero pressure.

One thing to keep in mind: Carsdirect is subject to the laws of supply and demand — the cars in abundant supply can be had far more cheaply than the ones in abundant demand. Forget about deals on the sporty new Honda Fit — they’re going like hotcakes so dealers have no motivation to sell at a discount. 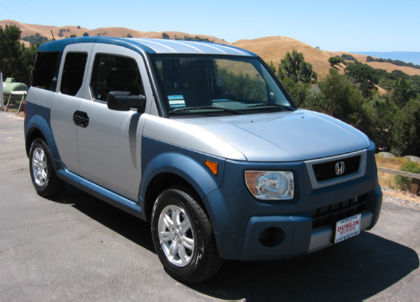 The blue panels are molded plastic: unpainted, so no worries about gravel chipping it. Of course it will fade in the sun a bit over the years but it’s a worthwhile tradeoff. Honda’s most ultra-delux trim option on the Element is the EX-P, which has painted fenders that look a little slicker but detract from the Element’s funky factor. (It’s an extra $500, a lot to pay for a few coats of paint.) 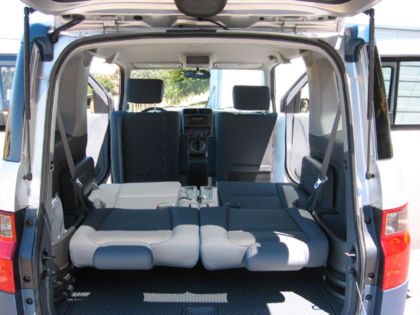 The back seats fold all the way down… 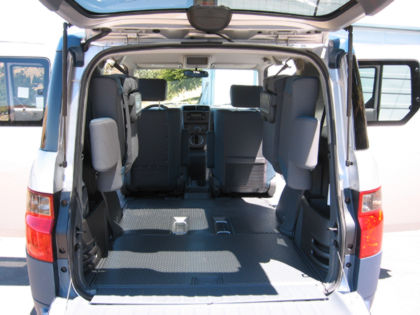 And can be strapped up to the side to make room for bikes or big dogs. The seats can be removed completely, which is nice if you’ve got someplace to put a couple car seats. 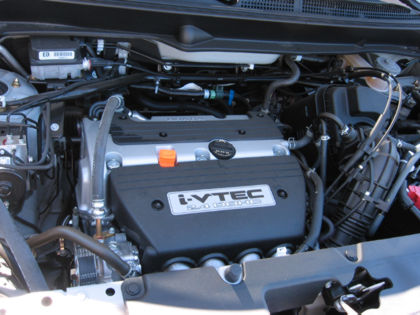 The 2.4-liter four-banger is reasonably zippy but it won’t bring many checkered flags your way (unless you’re racing grannies with walkers). 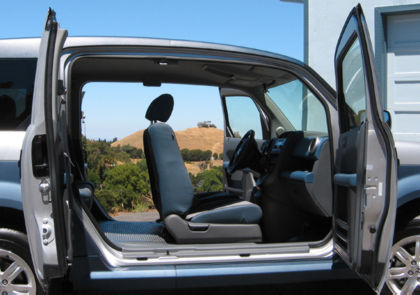 It has these double doors that make it fairly easy to climb into the back. Check out the space behind the front seats: that’s the rear-seat legroom. 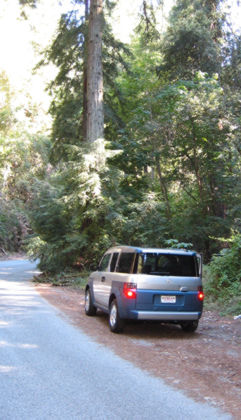 We took it out for a little road trip Saturday afternoon; I took a picture in a suitably outdoorish-looking locale. (We actually drove by the ocean but it was all fogged in; alas.)

Note the element is no longer than my Focus coupe — but it’s quite a bit taller.
Also rides a bit smoother but the handling is more boat-like. 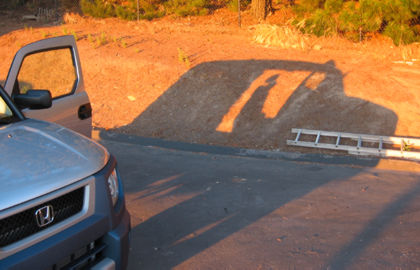 Getting toward sunset, and you know what that means: Self-indulgent attempts to get all artsy with the camera. 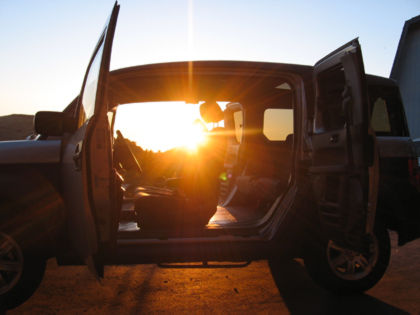 Sunset through the cabin: I may have to come back and try this again from a better angle. 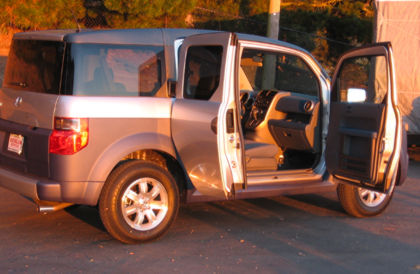 One last pic of the sunset casting its reddish glow on everything.

The Element is a fine little ride — and amazingly spacious once you take a seat and close the doors. It’s like the designers fashioned a bizarre optical illusion that makes it seem much bigger on the inside than it actually is. It’s an uncanny effect — all big and boxy when you might expect to be more intimately encapsulated in a car this size.

After Day One, I’m happy.