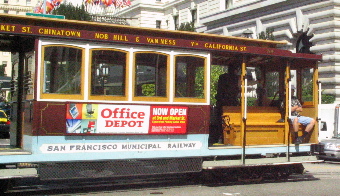 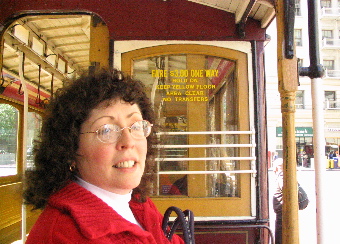 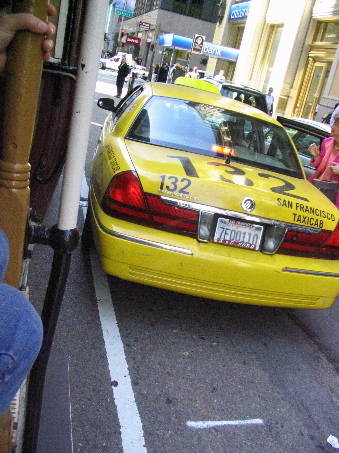 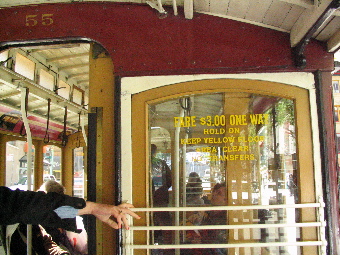 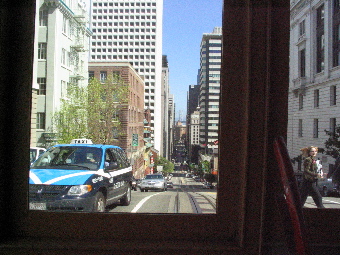 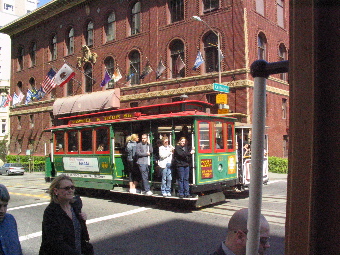 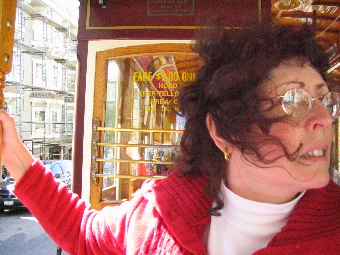 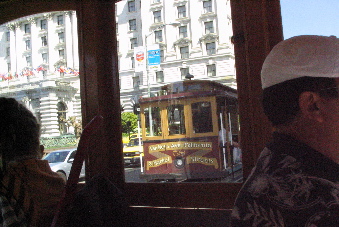 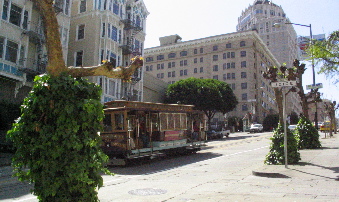 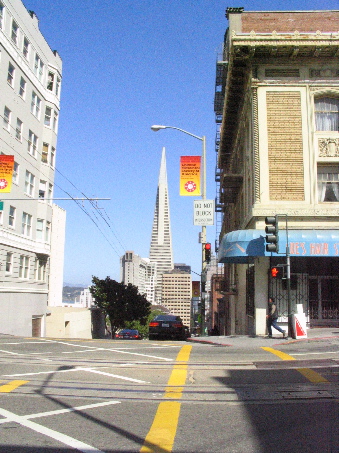 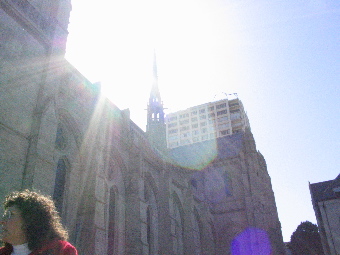 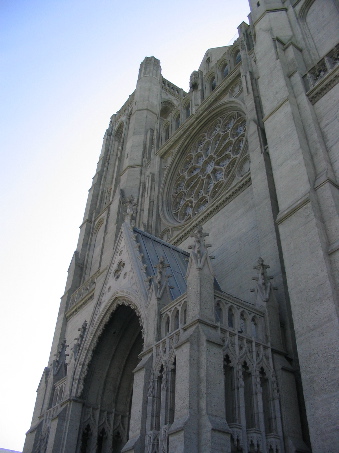 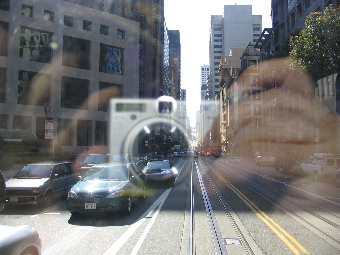 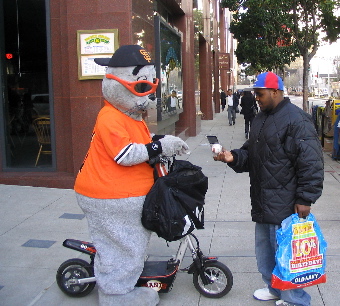 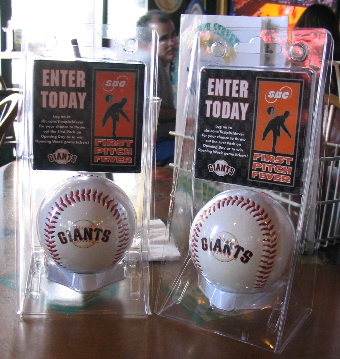 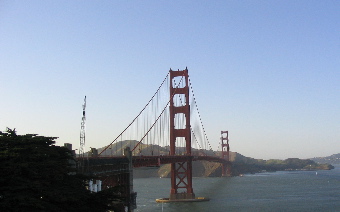 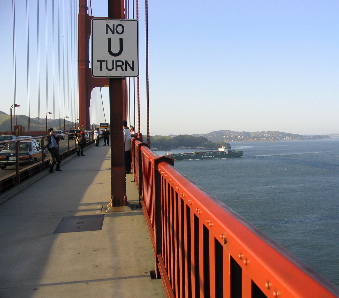 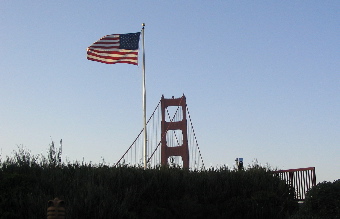 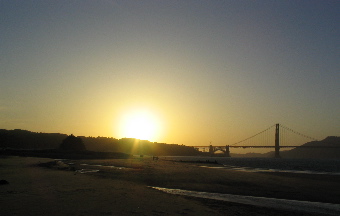 The wireless experience: I’m on the porch, kicking back in my lawn chair. I can see the tops of the trees decorating the apartment complex. The sky is that perfect color of blue you see only with 50 miles of the ocean. It’s breezy and warm, low 80s.

I’m listening to tunes streaming from my CPU in the other room. Bob Dylan growling something about love gone bad.

The beer is made by Gordon Biersch, a San Jose microbrewery. BG makes life worth living — in moderation of course. Surest way to ruin your appreciation for a good beer is to drink a lot of it. You need that taste you get when you haven’t had one in a week.


Just another reason why people move to California but never move back.


Did I mention I’m on vacation this week? Got three days to get my brain ready for this presentation I’m doing in Houston. Blogging for copy editors.


Maybe it’ll be nice in Houston but it won’t be this nice.

I have a way-cool new toy: an Apple wireless mouse. It uses the Bluetooth module built into my iBook. (Review of wireless devices here).

Note to self: find out who makes all the batteries and start buying up their stock. 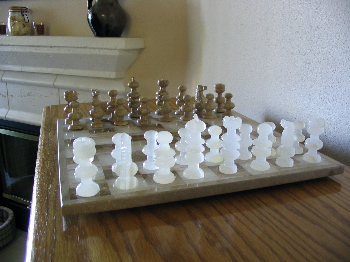 Here’s a really cool onyx chess set my mom got me for Christmas. Made by genuine Mexican peasants.

Posted for the heck of it: 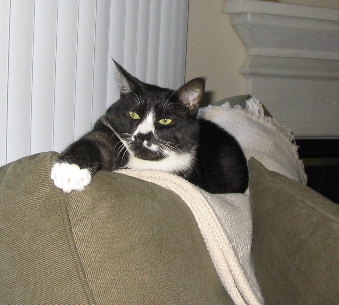 I had to watch, and now I think: Christ are they going to be this sullen and bitchy all season long?


Can’t figure out if this scene was poignant or silly: Tony is trying to talk his shrink into going out with him, she’s having none of it. He presses her for a reason, she says, “I don’t like your values.”


Tony says “What don’t you like about my values?”

My brain is screaming: You’re a fucking mob boss and a murderer, Tony. What’ s to like about your values?


So far two Annoying Guest Wiseguys Who Must Be Killed By Season’s End have been introduced. We saw a few scenes with the wonderful Robert Loggia, but only snapshots of the totally happening Steve Buscemi. Both of these guys can act circles around the entire cast of the Sopranos … must be written into James Gandolfini’s contract that they won’t be allowed to upstage him.


But they’ll be dead by the end of the season anyway, so why get worked up?


All I can figure is I must’ve been an honest chump whose shoe store got bombed by the Gambino gang in a previous life, because as much as I enjoy the comedy, the irony, the interplay of the characters, etc, a little voice is hollering from the far reaches cranium:

“The Sopranos are Criminals and they Belong in Prison for Life!” They do not belong in a pricey home in a, uh, tony suburb; they do not deserve to have their lifestyle beamed into six million living rooms every Sunday night. They are scum who kill, steal and maim to get their way.


How’d I get stuck with this brain, anyway? Because it’s saying, right now, “how about a TV show about the lives those bastards snuffed out?”


Please, somebody, give me another brain, one that can let this shit slide and let me enjoy the best show on TV.

I wore myself out blogging the Oscars last night, so I can’t get too inspired this morning.

If you need an excuse to do something work-related, check out all of Liz Donovan’s weekend links.

I think that’s gonna do it for today; I’ll have more energy and enthusiasm tomorrow, I promise.


A telling omission: none of the acting awards went to “Rings.”

Best pic has to be “Rings.” How can it walk off w/everything else and not win? Near as I can tell it won in every category it was nominated in.

Best actress: Charlize Theron gets the nod. God, these women are all hsyterical.
What a tan she has. Charlize, give it up, girl!

Tom Cruise gets to give one away but never gets one himself. Wow, he seems to have shaved for the first time since 1999. Best director: why even name anybody besides Peter Jackson?

Hey, it’s the Tim and Susan show. For some reason I knew it was going to be Sofia Coppola for original screenplay. Any question that the Coppolas are a film dynasty?

The Coppolas. Sofia’s on drugs, I swear. I’m rooting for “American Splendor” for best adapted screenplay but alas, it’s “Rings” again. Peter looks like Belushi with a beard.

Cinematography: Might as well give it to “Rings.” Wait, it’s not even nominated. “Master & Commander” takes it. A well-photographed film. The DP sounded a bit blotto.

Charlize: Is she as beautiful as Catherine Zeta-Jones? Melissa gives the nod to Z-J. Best foreign-language film winner: “We’re so thankful Lord of the Rings did not qualify in this category.”

Wow: Jack Black is really short. This “you’re boring” bit is pretty funny — the real “best song.” “Rings” taking another statuette makes me want to gag, though it’s good to see Annie Lennox up there.

Woo-hoo, it’s Mitch and Mickey from “A Mighty Wind.” Won’t win but it should. A rare outbreak of humor from the Academy. The Kiss: A hoot in any language.


Hmm, this French song is pretty entertaining. Those “Cold Mountain” songs are seeming stronger than ever.

“People are moving to New Zealand just to be thanked.”

Editing: A topic dear to my heart. Might as well be “Rings” again. How about we just give all the rest to “Rings” and we can all go home?

Best score: “Rings” again. They’re going have to start thanking people in Papua New Guinea next. Suggestion for future years: Couldn’t they do the thank yous in private? Think how much more meaningful it would be.

Not many categories left. Thank God.

Best documentary: “Fog of War,” Errol Morris’ first win. Haven’t seen it, wonder if he’s getting it more for his career. “I fear we’re going down a rabbit hole once again.” Billy: “I can’t wait for his tax audit.”

Kate Hepburn. True classic. A great one has to die so they can show some real entertainment on Oscar night.

Do I give a flip whose sound mixing was best? Take a guess. I thought it might go to “Master & Commander,” which had wonderful sound. But no: another “Rings” win. This is getting tedious. Now, clue me in: why a separate Oscar for editing and mixing? Hey, Master & Commander wins sound editing — see, I was half right.

Almost two hours in … my butt’s getting tired. circulation in my legs is going. Good thing this laptop is so warm.

Best Makeup: Another “Rings” lock? Well, that was a surprise.

Jennifer Garner’s dress: impressive. Safe bet the stars are all sneaking out for bathroom breaks about now.

Three songs in and no crap to be found. Amazing.


Annie Lennox sings the “Rings” song. Not bad, but not the equal of the Krauss songs.

Best live-action short: (where’s Danny DeVito?) “Two Soldiers.” Best animated short: “Harvie Krumpet.”
I wonder how many people have seen these movies and if they could fill a city bus. The Starsky/Hutch thing was mildly amusing.

Best supporting actress: Another impossible name… I’m guessing nobody portraying an Iranian will win, though. Ooh, Renee’s back up there again. Kind of an embarrassment to be taking it for best-supporting …. I mean, she’s a major star and everything. But it’s one more Oscar than Tom Cruise has gotten. How’s that for justice?

Costume design: “Rings” again. You’d get one too if you had to find costumes for all those orcs. (Renee: it looks like you’ve had a boob job!).

Best animated feature: “Finding Nemo” is a lock. Robin Williams needs to turn it off for once. The guy telling his wife he loves her in front of a billion people was a nice touch.

Production designer: (Angelina, we can see your nippies!). Goes to “Return of the King.” Pretty much a slam dunk. I was rooting for “Master & Commander,” because it was one of the first movies in which I actually made an effort to find out who the production director was. But the “Rings” stuff is so colossal in scale, no shame in losing out to it.

Best male supporting: (C. Zeta-Jones: too gorgeous for her own good). I hope it goes to somebody whose name I can spell. Tim Robbins! Cool. All the others are better actors, of course. The crowd holds its breath as Tim says, “I’ve got just one more thing to say.” Sighs of relief as he tells abuse survivors to get help.

He’s really going to keep this up for all five best-picture nominees. For once the rich, beautiful people of the movie industry pay the price of fame: no way to avoid Billy’s opening sequence. Please, bring on the awards for technical merit.

Over at my other place. Come on over and join the fun.