Downtown San Jose, typically the squarest place in 50 miles, became a tad cooler
yesterday with the arrival of ArtcarFest 2004.

The premise of ArtcarFest is that people who have made a canvas of their cars
gather all their zaniness into a single zipcode. There’s a strong aroma of hippiedom
— lots of peace symbols, feminist agitprop, antiwar statements, etc — but
the tone is light, frivolous, antic, occasionally silly. ArtcarFest presumes
to be the exact opposite of the typical classic-car show, but the people who
put 90 coats of paint on a 1950 Mercury have a lot in common with the people
who glue 90 Disney figurines on the roof of their 1969 Beetle. The classic car
buff wants to celebrate the automobile; the carart buff wants to subvert it.
Either way, cars provoke a creative obsession that produces more photo ops than
you can shake a hubcap at. Just what I need on a cool, cloudy Saturday. 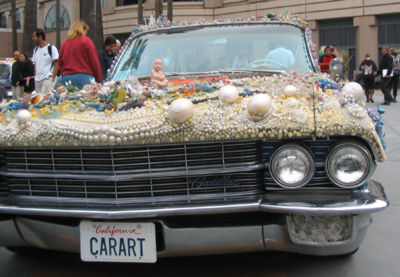 An early ’60s Caddie covered with costume jewelry. Because the car was so tired
of its owners getting to wear all the fake pearls. 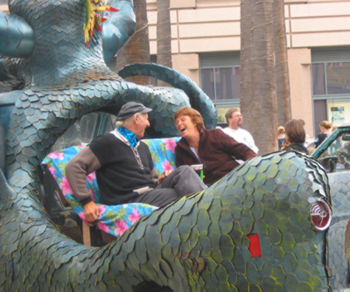 The couple kicking back in Snorky’s back end are having a high old time. 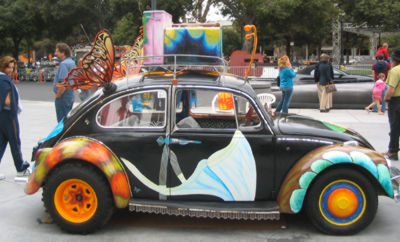 A Bug, with wings. Somebody had to, right? 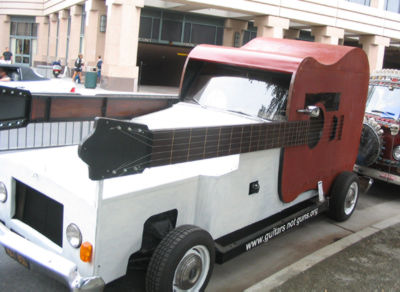 Sometimes an artcar is a concept. The frame rail says "Guitars not guns"
but from this angle those axes look remarkably similar to firearms. 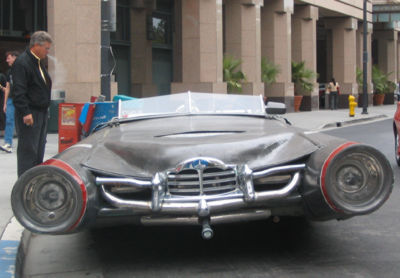 I’m pretty sure I saw this car built in some Discovery Channel show. Note how
unromantic cigarette smoke is from this angle. 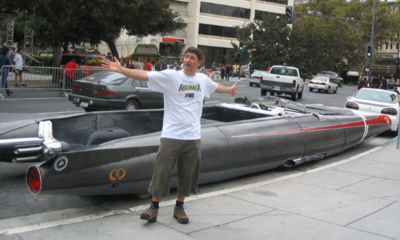 No, bud, it’s a lot longer than that. 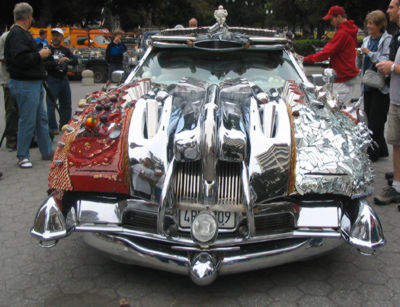 This creation was absurdly over-chromed. 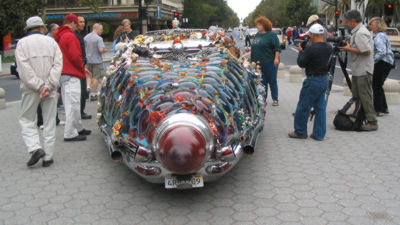 It looks much cooler from the rear — suddenly "Rudolph the Red-Assed
Reindeer" springs to mind. 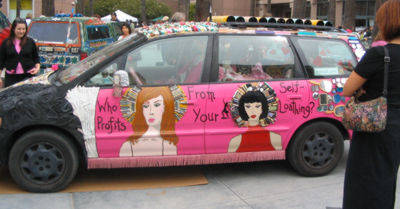 Who profits from your self-loathing, this car with curlers on the roof asks.
One of those "message" cars that’s about as subtle as a blown engine. 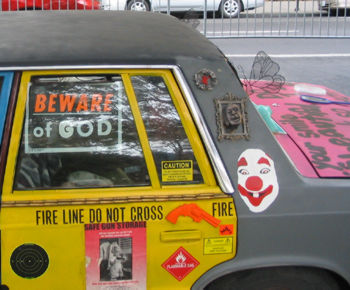 … because we all should tremble before the Creator, right? 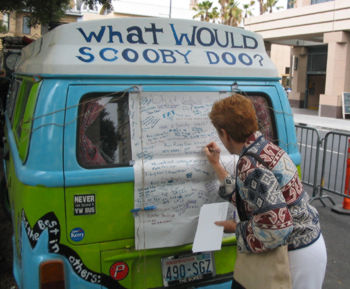 Look, it’s interactive: people write their suggestions for Scooby doings on
the paper. 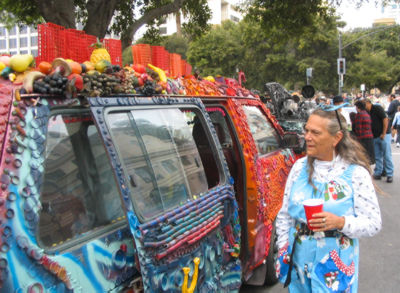 Some people you just know were hippies back in the day. 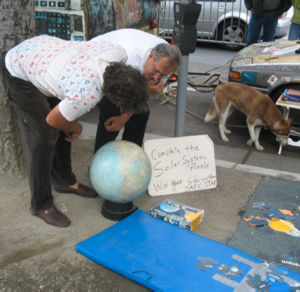 Two guys having a deep geographical discussion — good thing somebody left
that globe there. (this is weird: every time I try to write globe, it
comes out blog.) 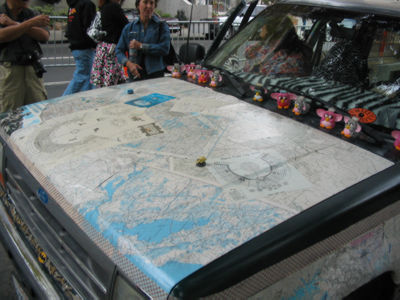 For those lacking a globe: a pickup truck coated with maps. 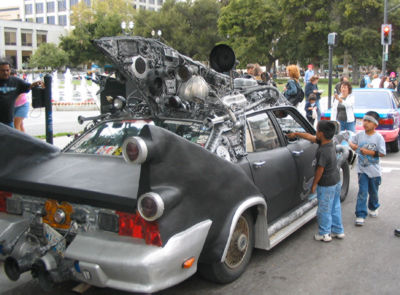 File under: What’s the wackiest thing you could do to four-door Ford Maverick?
You start with tailfins, naturally…. 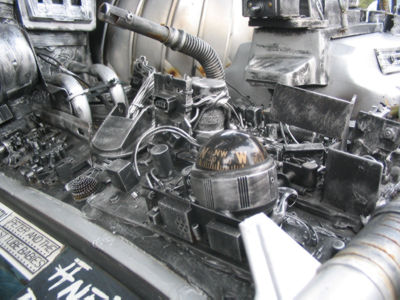 … but you keep adding stuff like this compass and all these mechanical-looking
contrivances. 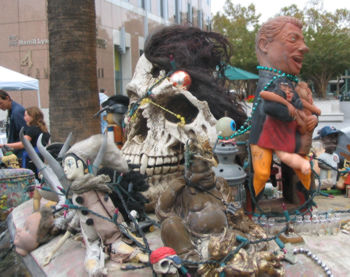 Some carartists just stick as much junk as they can find on the roof. 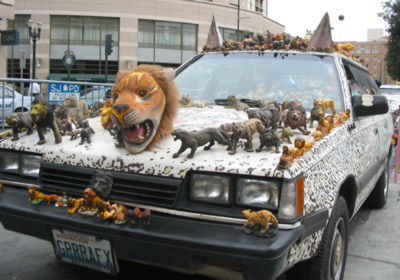 Others stick to a theme. Note the cat ears up there on the roof. 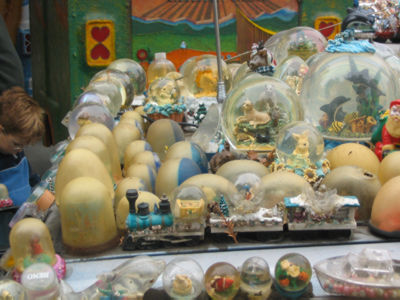 One car was covered with snow globes: I wanted to shake it real hard and see
what happened, but I figured it might shake the globes off the roof (which,
come to think of it, might not have been a bad idea. I love the "Rosebud"
moment of a snowglobe exploding.) 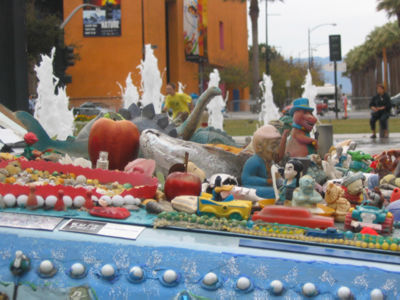 I took this only to get the downtown fountains in the background. 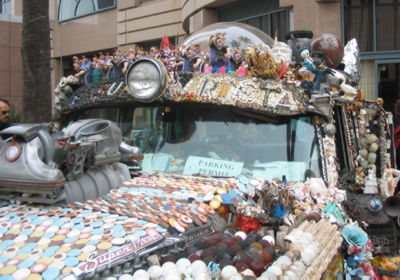 This guy took the "cover it with junk" ethic to extremes. Fortunately
he eventually ran out of car. 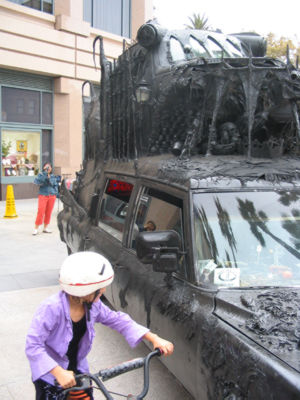 Here’s a little girl checking out the famed Carthedral — an old hearse done
up in Gothic fashion. 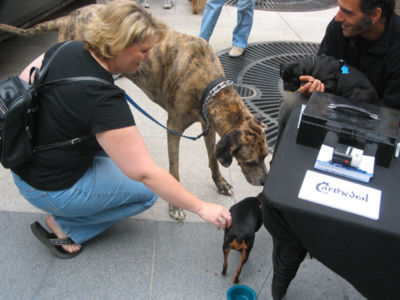 The guy next to the Carthedral had this little black dog that attracted a very
large dog to stop by and sniff. 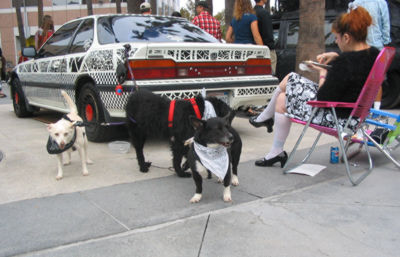 A carartist with her art, her dogs and her lunch. All that matters in the world.