After I got bored with the car show I started heading back down to Market Street
to catch the BART train back to the East Bay. Somewhere along the way I spotted
Coit Tower, which didn’t look too terribly far away (actually it’s a couple
miles) so I figured what the heck, how about a little urban hike? 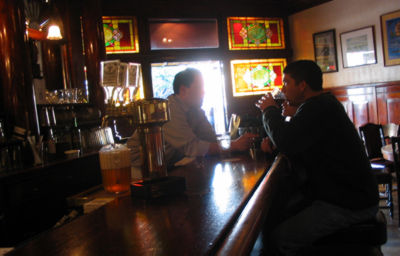 I paused for lunch at the San Francisco Brewing Company … which has good
beer made on site and not-too-shabby sandwiches. I had a sausage sandwich and
fries that were pricey but tasty. The great thing about San Francisco’s world-class
restaurants is that they force all the other eateries in town to raise their
standards. So even bars like this one serve food with gourmet touches.

That’s the Transamerica Pyramid down the street. I know I should resist the
temptation but I always want to take pictures of it when I’ve got my camera
handy. 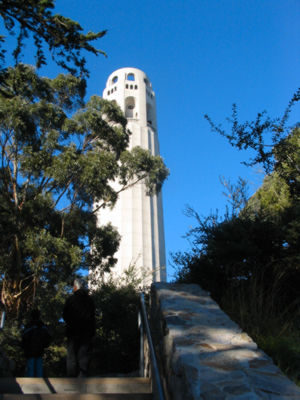 Here’s Coit Tower. Note the perfect blue sky — a storm blew through last night
and washed away all the air pollution. 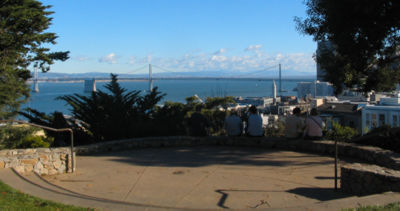 On the right it’s the Bay Bridge from Oakland.

On the left it’s the Golden Gate to Marin county. This is probably one of the
few places in the city where you can see both bridges. 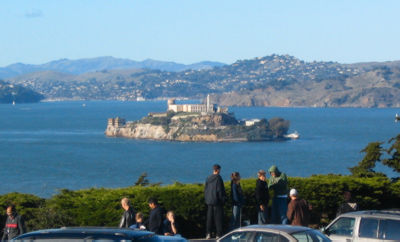 And, of course, Alcatraz. I can’t remember the skies being so clear in all
my previous visits to the city. 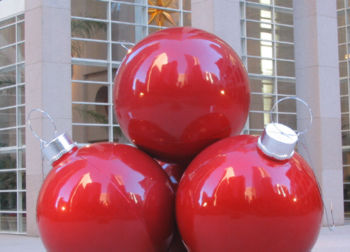 I walked past these on the way back downtown to catch the BART home.

All I could think of was this: don’t mess with Satan, he’s got three
testicles.