The idea of a camping trip started with a reservation made a few weeks ago. This town
called Mineral is just down the road from Lassen
Volcanic National Park, where I’d been itching to visit and climb
Lassen Peak. Mineral is home to fewer than a hundred souls, a few of whom
run the Mineral Lodge and Volcano Country Campground. I found out about this
place online and reserved a tent-camping site. It never occurred to me that
there would be any issues with a campsite that’s inside the city limits, considering
these limits are so, well, limited.

Well, we got to the campground, paid our nonrefundable $36 for two nights,
and checked out the campsite. We had an unobstructed view of the next-door neighbor’s
back yard, and were serenaded by the lovely chatter of a chainsaw. "This
is it?" Melissa asked, with some skepticism.

I looked around. Well, there were a few pine trees but it’s not the
kind of campsite you’d want to hang out at, unless you were pals with the neighbors
or talent-scouting for chainsaw jugglers. Melissa suggested checking out the
campgrounds in the national park, so we bailed on the Mineral campground. It
looks like a fine place to park your RV, but if you’re looking to pitch a tent
in a somewhat wilder setting, the park’s a better bet.

Lassen Volcanic has a nice walk-in campground at the park’s southwest entrance.
We picked this choice location not far from the bathrooms, which had running
water and flush toilets. All in all, a nice clean place, and a steal at 14 bucks
a night. 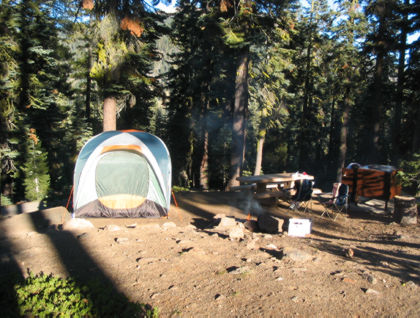 The setting sun warms the sides of our tent, while the fire burns down to coals
for dinner. 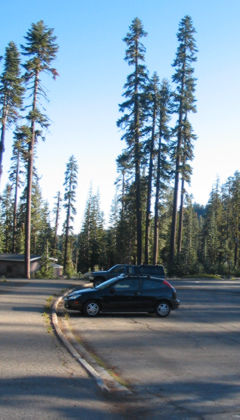 Another great thing about this campground: We had most of it to ourselves. 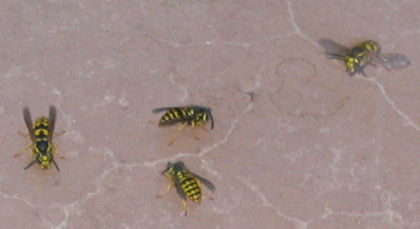 There were almost no bugs, except for these bees, which showed up every time
we had a meal. They dodged our swinging arms pretty well and didn’t sting in
retaliation. 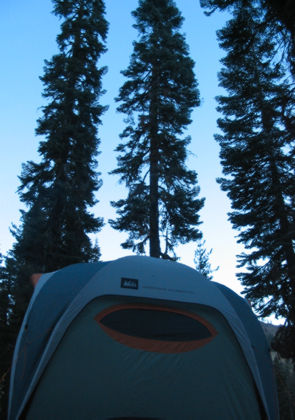 Night falls. It’s dark at 8 p.m., which is when we bunked for the night. That
meant we were up before dawn, which gave me a bright idea: let’s drive down
the road a ways and watch the sunrise. 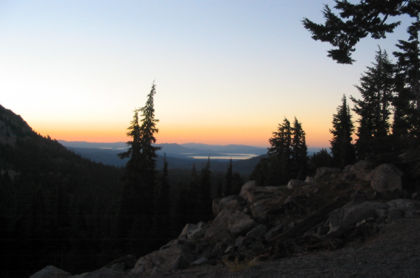 My timing was uncanny — this is just minutes before the sun rose over a ridge. 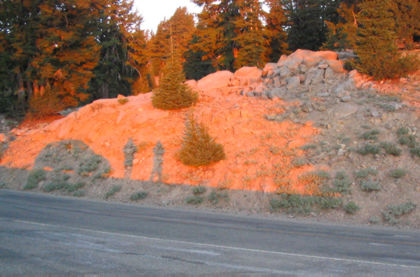 A red sky reflects on our shadows across the road. 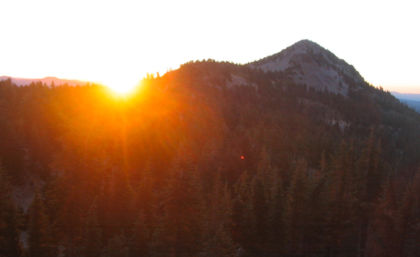 There it is, just as it has been for lo these billions of years. 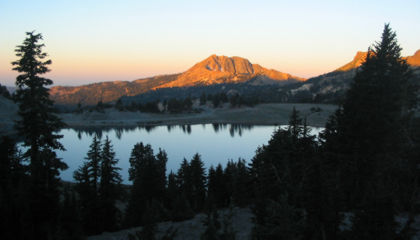 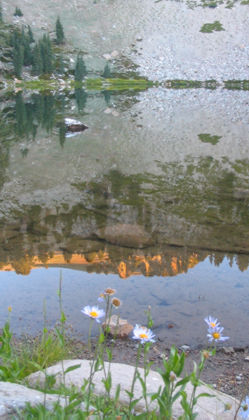 This is a little pond called Emerald Lake. In the morning its water is still
as a mirror. 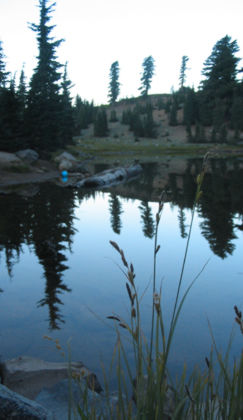 Nothing like a lake that sits still to have its picture taken, eh? 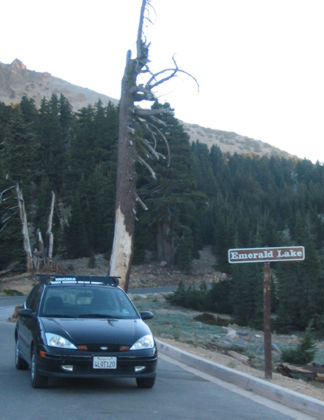 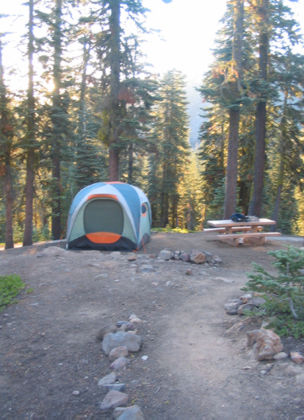 Back at the campsite, it’s time for breakfast. 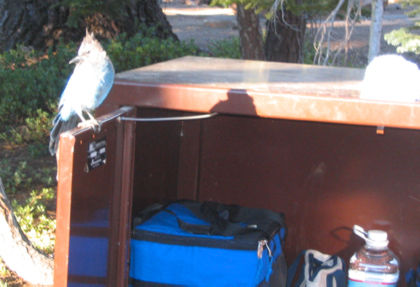 A scrub jay stands guard over the anti-bear box. Supposedly there are black
bears in the park but we never heard so much as a growl, though Melissa is pretty
sure she might’ve seen a mountain lion on the next hill over. 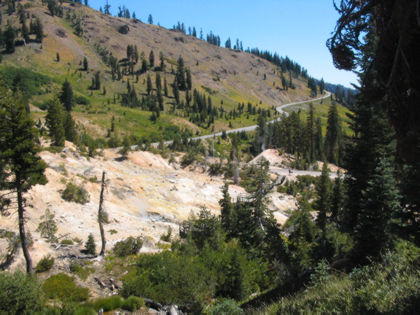 Before lunch I did my
Lassen Peak climb; after lunch I scouted out some of the park’s geothermal
features. The volcanos are inactive, but there’s still lots of hot lava beneath
the ground throughout the park. In a few spots, the lava is close enough to
the surface that it sends plumes of steam up between cracks in the ground. In
other places it melts clay and emits a rotten-egg smell that comes from a sulfur-based
chemical reaction. This picture is part of the Sulfur Works, which stinks to
high heaven but is pretty cool otherwise. 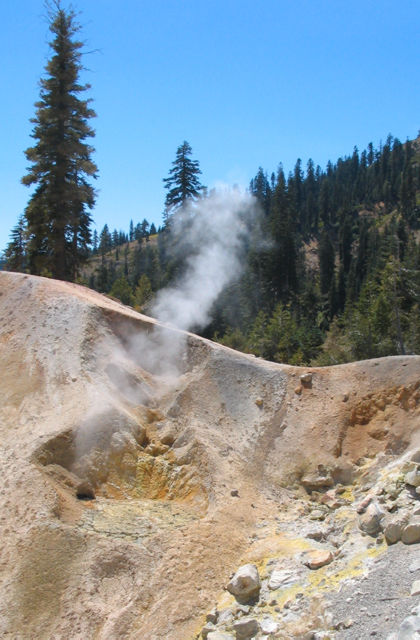 Steam rises from a vent in the ground. 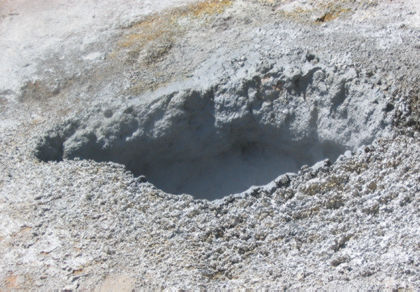 Deep down in this hole, a pressure builds below a bunch of molten clay — it
makes this remarkable glub-glub-glub that echoes off the sides of the hole,
creating a racket that sounds almost exactly like a bear tearing up somebody’s
garage. 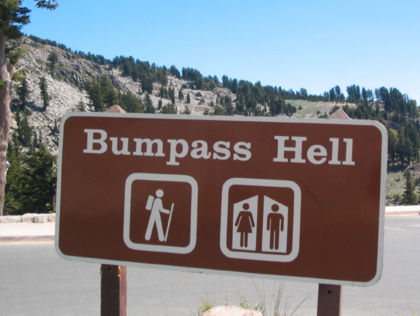 Bumpass Hell is another geologic area named for a guy named Kendall Bumpass,
who explored this area in the 1860s. The "hell" part is what it smells
like after you hike a mile and a half to see the area. 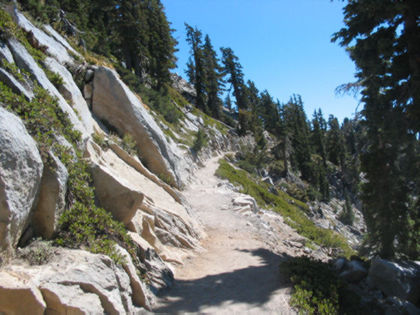 The hike isn’t too tough, with this trail here. It rises about 500 feet from
the trailhead, then falls another 400 into Bumpass Hell. Because, you know,
you must descend into hell. Somehow Mr. Bumpass got back there with no
trail, no rubber-cleated hiking boots, no hydration kit. Americans were a lot
tougher back in those days. 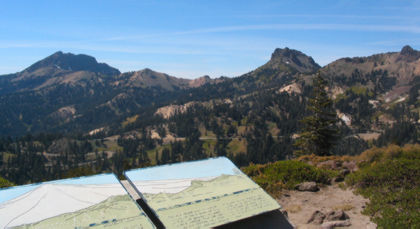 A guide post explains how there used to be a gigantic volcano that would’ve
filled this entire picture. The volcano collapsed in on itself, leaving Brokeoff
Mountain at the left and the two craggy peaks on the right. 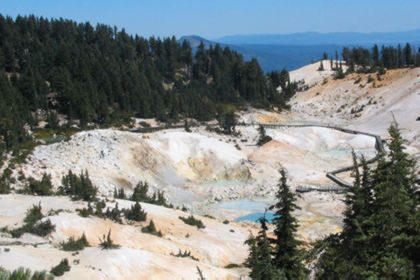 At long last: Hell. The ground here is hard and brittle, and a wrong step can
send a foot down through the crust into boiling water warmed by the lava below.
Mr. Bumpass suffered precisely this fate, which scalded one leg so badly that
it had to be amputated. Bumpass Hell, indeed. 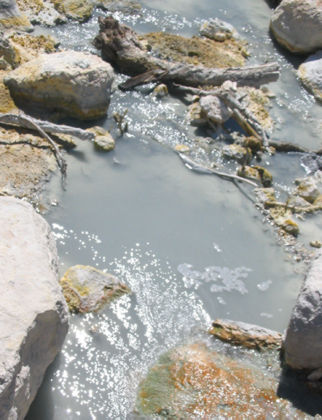 Water, soft clay and God knows how many obnoxious chemicals. 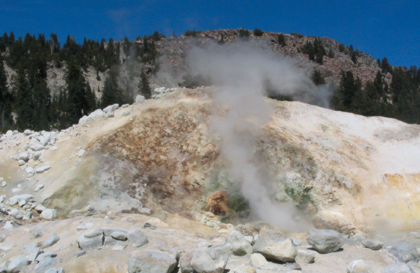 A giant steam vent makes a rushing sound audible at our campground a couple
miles away. 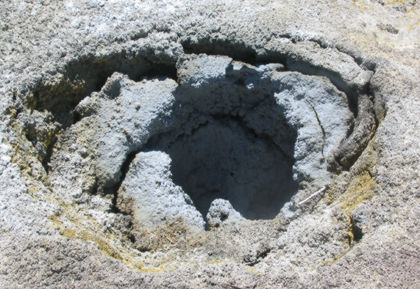 Another of those holes with the burbling mud deep down inside. This one reminded
me of the giant creature in the third Star Wars movie that Jabba the Hut ordered
Luke and the gang thrown into. Come to think of it, it sounds vaguely like Jabba
gasping for breath because a scantily clad princess has a chain wrapped around
his throat. 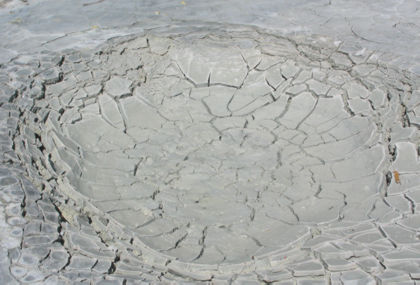 Mud dries in the sun. 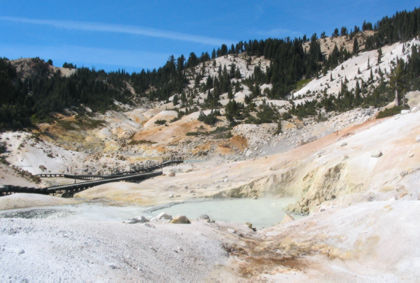 Chemicals bleach the hillsides. The stench is dreadful, but at least the wind
blows it away somewhat. 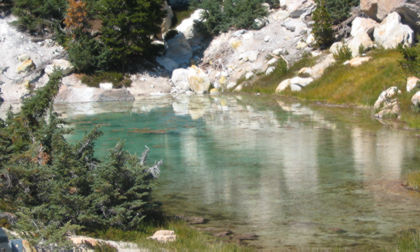 A bit of standing water appears to be crystal-clear. Just keep in mind that
sulfuric acid is see-through too.

I fled Bumpass Hell as soon as I could. It’s interesting from a scientific
standpoint, but it’d be nice if there was a park ranger handing out gas masks. 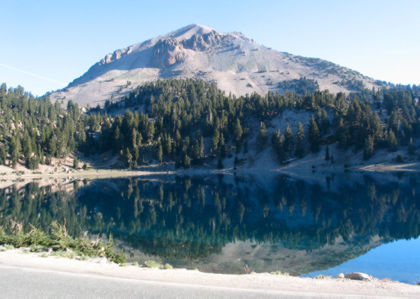 The next morning I took one last picture of Lassen Peak reflected in Lake Helen.

I slept so soundly that I missed the arrival at our campground of a small family
who showed up at approximately 2:30 a.m. with screaming toddler in tow; pitched
their tent not 50 feet from ours; and managed to set off their car alarm —
all this was related to me by Melissa, who was awakened by these people’s racket
and didn’t get back to sleep for several hours. The only thing that amazed her
more than these people’s boundless lack of quiet-hours etiquette was my ability
to sleep through it all.

The Peak and Bumpass Hell are the two must-see (and smell) locales at Lassen
Volcanic National Park, and you can do both in the same day if you’re feeling
energetic. The rest of the park has miles and miles of trails and enough lakes,
crags and extinct volcanoes to keep you busy for a week or two. Just keep in
mind that the park’s buried in snow most of the year. Don’t come out in April
thinking you’ll experience Springtime in the Cascade Range. Most years the snow
is piled high on the peak through mid-June. Late August and early September
are the best times, because the days are not too hot and the nights are not
too cold.

Come during the week after school’s back in session and you’ll have the place
pretty much to yourself. It’s very much worth having.