This is my last post describing our trip to far northern California last week.
(Our camping trip here;
my Lassen Peak hike here.)

On Friday morning we left Lassen
Volcanic National Park via the northwest exit and headed to Redding to check
out the way-cool Sundial
Bridge, which was designed by the Spanish architect Santiago Calatrava and
opened to the public on July 4, 2004. I saw a documentary about the bridge’s
building earlier this year and knew I had to see the thing up close. 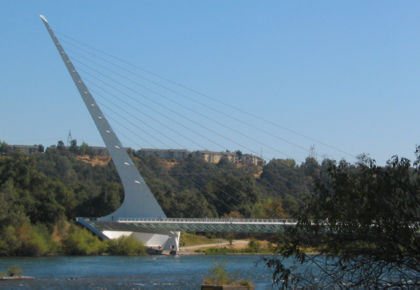 Here’s one look at most of the bridge, commissioned by the McConnell Foundation, which apparently wanted to build something
unforgettable and opened its wallet wide. Final cost: $23 million, of which the foundation supplied more than half. As much as
I hate to quote the Mastercard commercial, here’s one case where the result
is truly priceless. 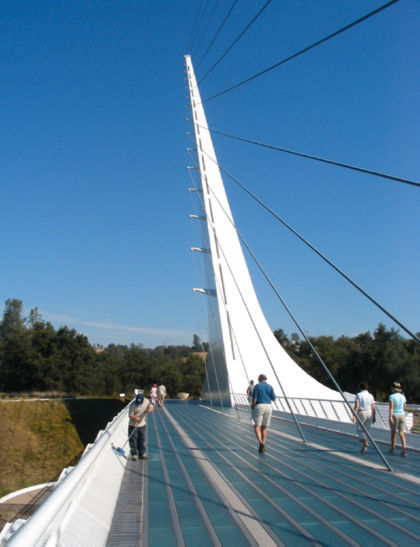 The bridge has only one job: giving pedestrians and bicyclists a quick way
to cross the Sacramento River. You can’t see it from this angle, but the supporting
spire rises at the same angle as the riverbank, making it seem integral to its
surroundings. 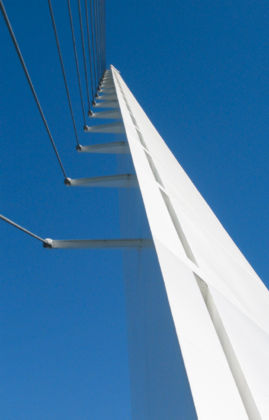 The spire practically begs a photographer to capture it from numerous angles.
They’re all pretty cool. 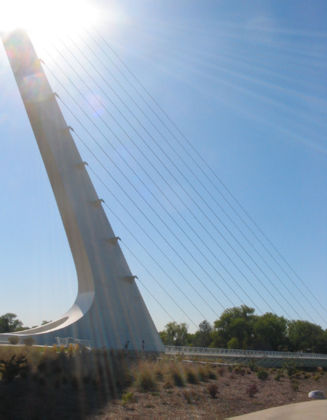 Note the sun’s rays seeming like more cables from the bridge. I can’t imagine
the architect had this effect planned out, but the guy is a genius so
one never knows. 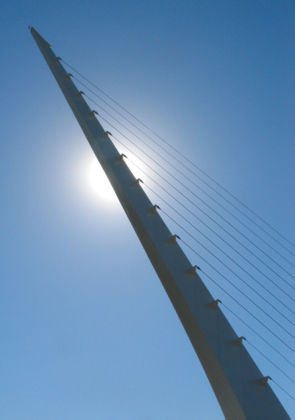 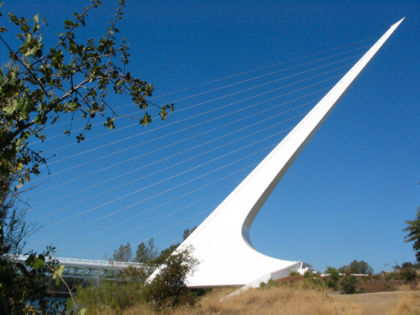 One more angle from the nearby shore. 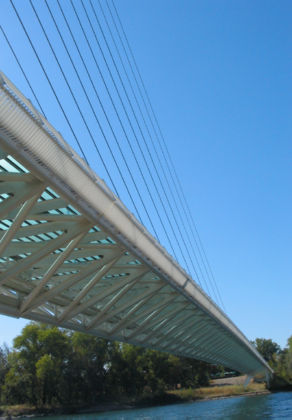 Salmon spawn nearby, so the the bridge was designed to span the river without
touching its waters. 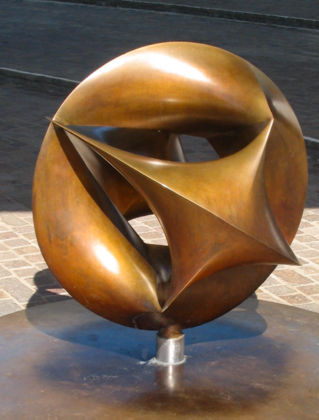 A sculpture by the architect is beneath one end of the bridge. 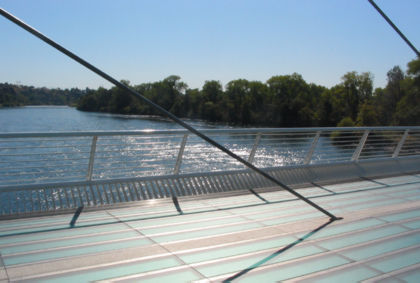 The Sacramento River glimmers in the morning sun. 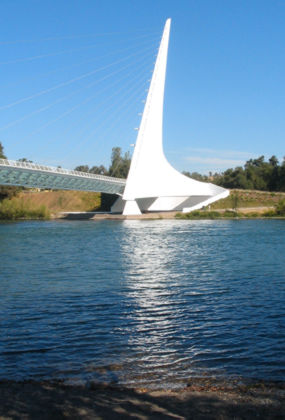 OK, one last look from the opposite bank.

This one little project in a small city 200 miles from the nearest metro area
seemed to define why humans have had this perpetual urge to create wonderful
public art. The art is never exactly necessary but once finished it seems absolutely
essential.

It reminds me of the Sistine Chapel, whose ceiling would’ve required some kind
of a paint job. Any old painter could’ve put a nice, comforting tint up there.
But one pope decided he wanted something special up there, so he hired one of
the best artists of his time — Michaelangelo — to paint biblical scenes on
the ceiling.

I’m not saying the Sundial Bridge is in the same league as God’s finger touching
Adam’s, but the idea is similar: taking something that is merely useful and
making something amazing. Not all the motives were the noblest: just as the
city of Redding enjoys the tourism dollars spent by folks coming to see the
bridge, it’s a fair guess that the pope who hired Michaelangelo was flattering
his own ego and hoping to create an attraction that would fatten the Vatican’s
receivables. But if greatness happens, all is forgiven.

The documentary about the bridge’s construction featured interviews with befuddled
people of Redding who didn’t quite know what to make of the bridge, particularly
during the mess and tumult of its construction. Even after it was done, they
couldn’t figure out what the fuss was about; some thought it was an eyesore.

I practically shouted at my TV: People, one of the world’s greatest architects
is building something remarkable that he’ll get no use out of but you’ll get
to use as you please for years to come. It’s not costing you much. Try to
show some appreciation.

People usually get what they deserve, but the magic happens in those rare instances
when they get something better.

(If you’re curious: a blogger from southern Oregon has a pair of interesting posts about the bridge here and here. The San Francisco Chronicle also has a review of the bridge.)