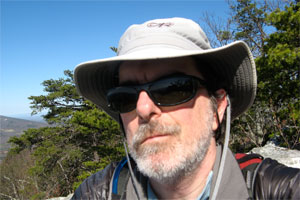 It used to be easy to explain how I earned a living. Just show somebody the daily scandal sheet and point to the headlines, captions, photos of a proper proportion, etc. All that ended a couple summers ago when I left the San Jose Mercury News by the back door for the last time.

Today I’m doing something similar yet altogether different. I still write, I still edit, I never stopped blogging (it was easier to kick nicotine). I call my new venture Verb Nerd Industries — the link leads to several pages of shenanigans I’ve been implicated in over the years. My life story at a glance:

1968: Moved to suburbs of Peoria with family (yes, Peoria had suburbs).

1979: Graduated from Limestone High School (see “Dazed and Confused”; it tells all of our stories).

1984: Entered journalism school at Southern Illinois University at Carbondale. Worked for campus paper called the Daily Egyptian, which was at least 10,000 miles from the Nile.

1991: Married Melissa, next-door neighbor of the guy at the desk next to mine at the Trib.

1993: Moved back to Peoria to work for the Journal Star. Career highlight: compiling a package of stories revealing that the all the rich and famous Peorians got that way after moving away.

1996: Started my first blog, devoted to journalists’ websites. Didn’t realize it was a blog until years later.

1999: Moved to Silicon Valley to see the great Tech Boom up close. Tech Bust ensued as if on cue. Followed all the fun from the front lines at the San Jose Mercury News.

2009: Second market crash in the space of a decade motivated me to try new things outside the newspaper business. Relocated to North Carolina for the abundance of cheap housing and hiking trails.

2011: Launched Verb Nerd Industries. Avalanche of clients currently poised on a cornice somewhere in the Grand Tetons. Hire me now and beat the crush.