It’s four hours past sunset and I’m attempting to sleep on snow seven feet deep. I’m about 50 yards from the Pacific Crest Trail, an hour’s slog (on snowshoes) south of Carson Pass in the High Sierra south of Lake Tahoe.

The head of my mummy-style sleeping bag is drawn tight with a tiny oval that allows my breath to escape. You know how your breath forms a cloud when you’re out in the cold? Well, that warm moisture will condense and freeze when it lands someplace ice-cold, like, for instance, the nylon tent fabric about six inches from my face. A clump of something falling from a nearby tree hits the tent hard enough to loosen bits of my frozen breath. Tiny, icy particles flutter back into the face from whence they originated. The sky outside is cloudless, a million stars visible. The only snowfall is happening inside my tent, and it lasts on and off till dawn.

Night follows a day in which I have spent an afternoon amid the mind-boggling splendor of the Sierra Crest on my hands an knees tunneling into a hillside, helping my two fellow campers dig a snow cave. Five hours of battle with crisp, hardened snow yields a snug, claustrophobic cavern big enough for two. A tent is available; I snap it up. My new sleeping bag is rated at zero degrees Fahrenheit, and I’d like to sleep above-ground to test the claim. The bag is plenty warm (though I doubt the temperature dipped below 20). As usual I toss and turn all night and emerge feeling somewhat rested, so I figure I must have gotten some sleep. At least there are no dreams involving bears. I hate those.

So this is the snow-camping trip I wrote about last week. Steve, a seasoned outdoorsman who reads my hiking blog, has offered to take me along on a winter camp-out and show me the ropes. Well, the snow shovels. An acquaintance of Steve’s named Anne who backpacks her feet off all summer also wants some snow-camping experience. Steve does the driving and the cooking; I’m half tempted to think he’d have carried our packs if we’d asked real nice. Steve’s from Iowa and nice just comes natural to him. I know he’s nice because I’m the least-adept snow-cave builder in, well, our immediate vicinity and he airs not a single complaint.

The original plan was for all three of us to sleep in the cave, but the snow had other plans. After digging till nightfall, Steve decided to set up the tent he brought in reserve. I know it’ll be nice and warm in the cave but I crave the experience of roughing it a tent. Steve and Anne oblige.

The great thing about snow camping is, of course, the snow. It adorns hills, trails, trees, tents, people, and flatters them all. The bad thing about snow camping is also the snow, because it is merely frozen water desperate to return to its unfrozen state. The appearance of people in its midst fulfills the life’s ambition of two molecules of hydrogen bonded to a molecule of oxygen. All people need to know is: stay dry or freeze.

Fortunately for me, Steve teaches snow-camping for the Sierra Club and has given me tons of pointers on the kinds of clothes to wear (hint: an extra-warm parka is essential; down pants are nice too, though a tad less mandatory.) Normally trudging through snow at 8,500 feet on a mountainside will keep you plenty warm. But when you stop, you need insulation. You also need layers of clothes that will wick sweat away from your skin and help it evaporate. Even if you do everything right, you’ll get cold.

Speaking of cold, there’s one more major snow-camping annoyance: the cold will freeze any water your bring along, so drinking water for coffee, tea and meals must come from melted snow if there’s no gurgling stream nearby.

Even with all the mandatory precautions, snowcamping is worth a try. I did it precisely because the idea of camping in the snow was outside my comfort zone. Some things you do just to prove you can. 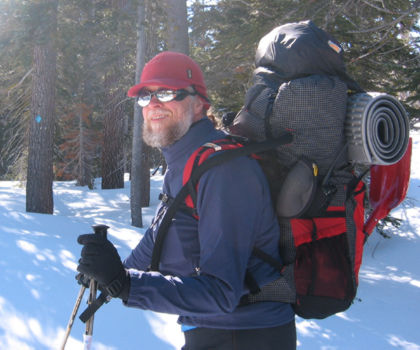 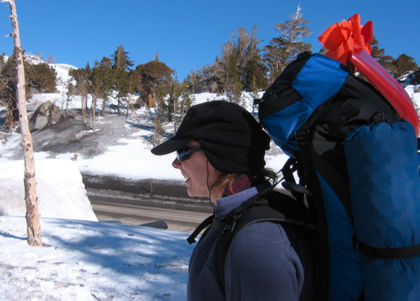 Anne, near the parking lot Sunday, happy at the thought of warmth. 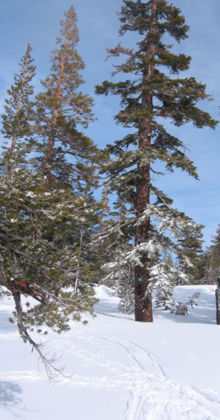 We camped not far from this tree. 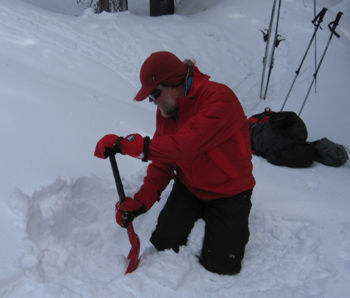 Every cave begins with the first shovels of snow.

From this point on Saturday it was all hard labor. We drove almost 200 miles through sleet, rain and snow flurries on the mountain passes to reach the trailhead. Within an hour the sky cleared and the weather was perfect the rest of day. We spent it tunneling. Just like "The Great Escape," minus evil Nazis and Steve McQueen.

After dark, we dined. Steve cooked up a fantastic pot of salmon polenta. It wasn’t just the fact that the food we were consuming was the only warm thing in three miles: it really was tasty — seasoned nicely and everything. Later I heard Steve say "Backpacking isn’t worth it if you can’t have good food." Well put. 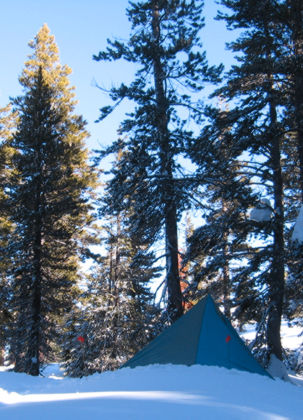 Sunday morning. It’s still warm in my sleeping bag despite the visits of J. Frost. Some people put their boots in their sleeping bag so they’ll have warm shoes the next morning. That’s my plan for the next time. 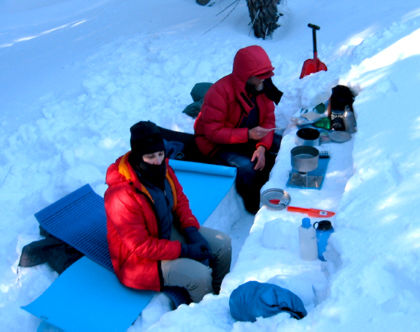 Steve makes breakfast, Anne tries to stay warm. Breakfast is oatmeal with cinnamon and dried strawberries. I’m thinking "heck, I don’t really do oatmeal but I’ll have some to be polite." The oatmeal kicks ass. Steve has done it again. Two fine meals I didn’t have to cook in the space of 12 hours. Yeah, it’s worth the cold toes. 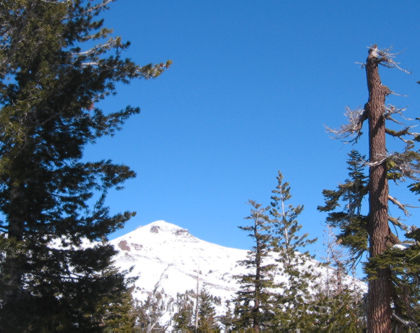 You put up with a lot of nonsense in California to have scenes like this nearby. It’s a fair trade.