More pix from my hiking excursions. Yesterday, I went down the hill to Ed Levin County Park, which has a trail up to Monument Peak — it’s the hill with the big towers that’s in the background of some of the pictures I’ve posted here. Today I went back back up Mission Peak; remembered my camera, forgot to recharge the battery pack, which died at the summit.

I met Karen, left, and Gene early on the trail and we went all the way to the summit and back down to the park. Karen’s training for a hike in Inca ruins of Peru. Gene’s a retired San Francisco cop whose stamina left us trailing in his dust much of the way. He may be in his 70s, but he walks these trails like a teen-ager (but his attitude is a lot better). 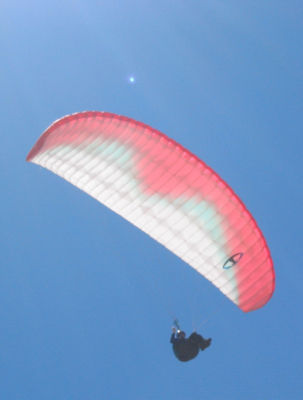 This paraglider went right over us. Decent of the flier to get close enough to show up in the frame. 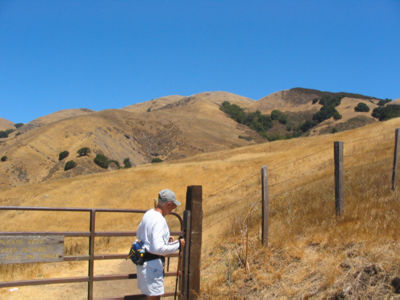 Monument peak is the summit in the top right of this picture. I’m guessing this is about halfway up. 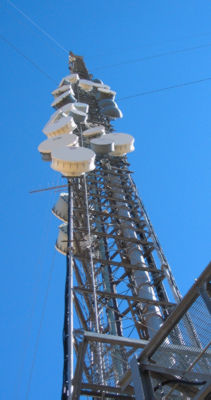 When you get to the top, this transmission tower dominates the landscape. My best guess is that those those drum-looking things send and receive cell-phone calls. Somebody left a couple jugs of bottled water up there — I filled up for the walk back down, and needed every drop of it. 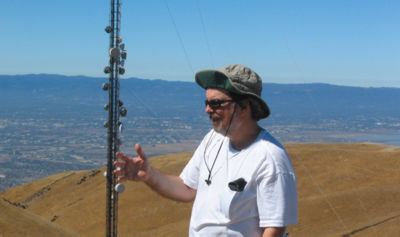 Monument Peak summit. Gene took the picture and insisted that I hold my hand out there, like I was gesturing or something. It came out pretty good, with the tower in the background.

It was a fairly grueling hike, but nothing like Mission Peak, which I climbed this morning.

It was early enough that the sun overexposed many of my shots when I pointed the camera at the peak. This is early in the climb, and it’s possible that I was not completely drenched in sweat at the time.

At this point I was soaked, after going 2.5 miles or so uphill with a few short rests. The trail threads its way through these rocks up the ridge to the summit. It’s a pretty wicked little walk, but getting up here is the hard part. As long as the top’s in such clear view it’s easy to keep the feet moving one step at a time — and even though it’s the steepest, most treacherous part of the climb, I’m not having any doubts. Those happen all the way up to here, when turning back is thinkable. From here, it’s to the top or pass out trying. 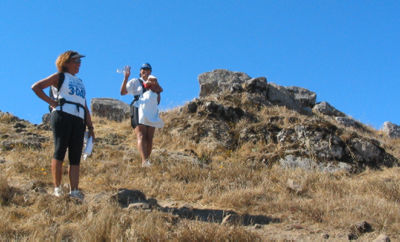 These two women were my heroes. They passed me very early on the way up (in the first half-mile), and I’m catching ‘em here on the way back down from the summit. When they passed me the first time, I asked the woman on the right if she was going to carry that baby all the way up. "Unless you want to," she said. I declined. The woman on the left said it was her third trip to the top in three days. 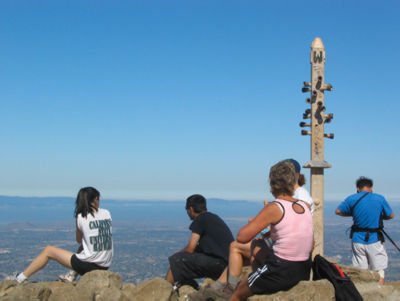 Top o’ the hill. That pole over there has eyepieces you can look through to see various sights in the Bay Area. It was really hot and sticky, without much of a breeze even at that height. Most of the folks headed back down in short order. 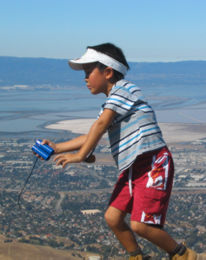 This kid was running over to his dad — who brought the guy up here, I imagine, because walking three miles up some of the steepest trails in town is the only thing that’ll burn off all his energy.

Speaking of energy, all the power drained out of my camera’s battery pack about a minute later. Most of the power had drained out of me, too, but I had a hill to walk back down. As somebody once told me: getting down is not an issue. Gravity will take care if it if nothing else does.