Awhile back I joined a Yahoo Groups mailing list called Walk South Bay. Today I went on a hike with some Walk SB folks, about 8 miles or so, up and down a ridge at Rancho San Antonio park on the east side of the valley. The closer you get to the coast, the greener the vegetation gets, especially on the western side of the Santa Cruz Mountains, which don’t have to endure the blazing afternoon sun that bakes the East Hills (where we live) to a tender golden brown for nine months of the year. 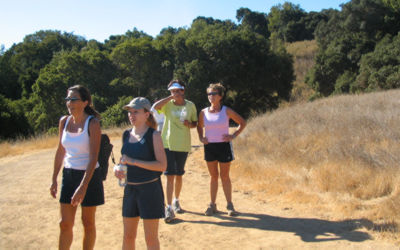 Here’s part of today’s group: over at the far right is Chantelle, who organized this morning’s exertions. At the far left are Clara and Melanie, two recent transplants to the valley. I don’t recall the name of the fourth woman — she and a couple others took a shortcut back to the main park area, a wise choice considering it’d be 95 by the time we got back to the starting line. Six of us ended up following Chantelle up the hills and back down. 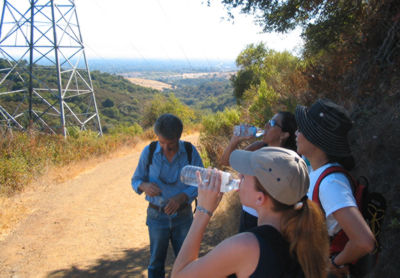 Stopping to take on water, about a quarter of the way up. At the left is Julio, a former NASA/AMES researcher who helped send a lander to Mars. At right is Jin, who has another big hike planned tomorrow at a cooler, shadier park.

This was a pretty grueling hike to the top of the ridge for me — Jin, Clara and Julio were kind enough to hang back with me when I said "let’s rest in that shady spot" for the 99th time. 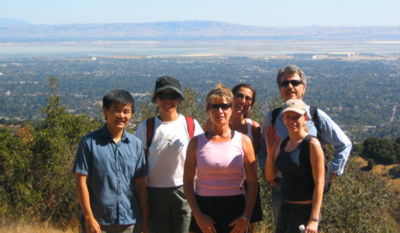 At the top of the trail, before heading back to the park. From left, Tri, Jin, Chantelle, Clara, Melanie, Julio. Two kinds of courtesies were happening on the trail: those slowing down for me and those speeding up for Tri, a former cross-country runner who walked the whole way in sandals, barely broke a sweat in eight miles and kept Chantelle and Melanie moving at an impressive clip. 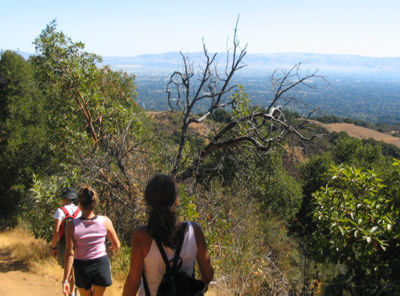 I got a lot more pictures on the way back down — I was so busy trying to keep air in my lungs on the way up that I didn’t find much time for shutterbug-ery. When I caught my breath, one of the first things I noted was a fresh entry for my "Cool Trees of California" file. 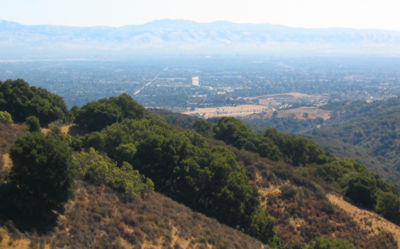 That’s Silicon Valley down there. The mountain range we live in is over on the other side. 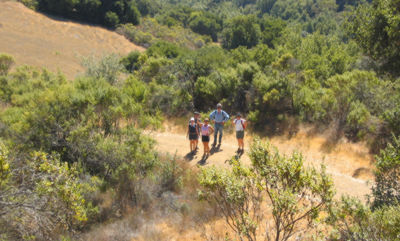 On the way back down, Clara and I slowed to what I dubbed flatlanders speed. That is, the pace required to allow for taking photographs of the scenic splendor. (Clara moved here from Chicago a few months back.) That’s the rest of the gang on the trail below us. 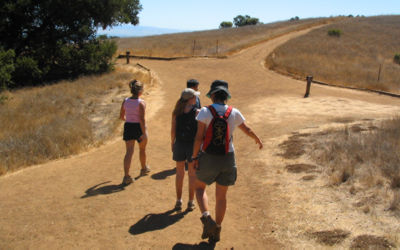 Posted purely to allow me to say "when you get to a fork in the road, take it." 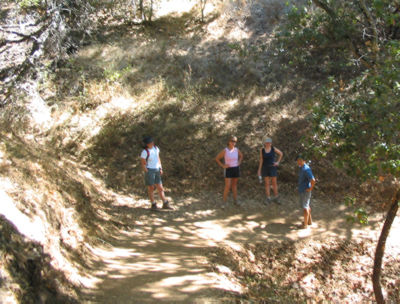 Waiting for us again. 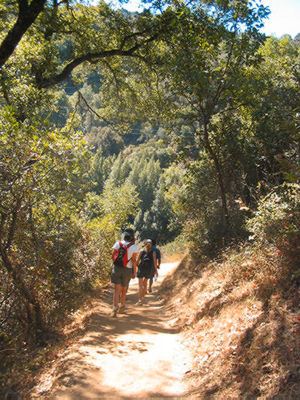 I love it when the trees frame the picture. It’s as if they grew that way for my convenience. 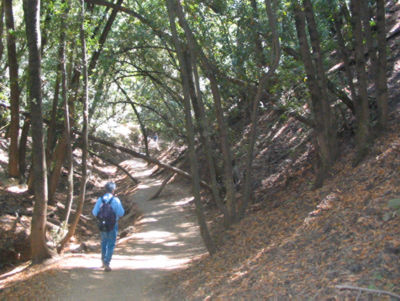 Now we’re down in a canyon leading back to the park entrance. Trees falling over the trail are just too damn scenic. 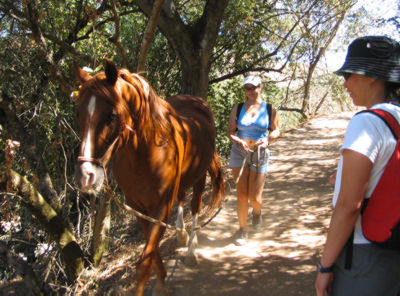 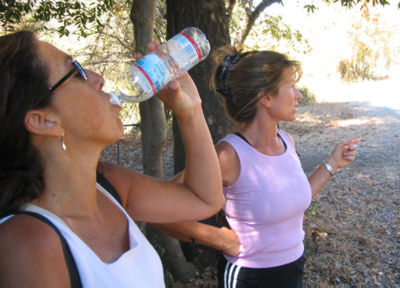 Clara does the hydration thing at trail’s end. Chantelle, a natural-born hike leader, looks like she’s already got the next three worked out in her mind 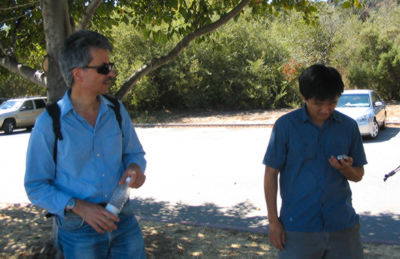 Well, them’s the highlights. Thanks to Chantelle and the rest of y’all for being such fine company for a hot, dusty morning on the trail.

I’m sure there are insufferable people who hike but I haven’t met any. Everybody I’ve hiked with, whether planned or by happenstance, has been way, way cool — fun to be around and patient when the hills got too steep. Must be something about walking among all this scenery that puts people in a personable frame of mind. Maybe it’s the perspective that comes from seeing stuff that’ll be here a billion years after the last breath’s been burped out of us.

OK, that’s as profound as I get on a Saturday afternoon.