A stand of strange, wonderful rock formations called the Pinnacles National Monument lies about 80 miles south of San Jose. Getting a good look at the place means four hours of driving for five hours of hiking. I went with FOMFOK (Mike & Kathy’s hiking group) on Saturday, and it was the hike of a lifetime. Perfect weather, wildflowers everywhere, and oh, those rocks. Worth the drive.

The National Park Service looks after the Pinnacles, which have a visitors center at the east entrance and a ranger station on the west. There’s no road through the middle of the park — hiking is the only way to get from east to west unless you want to take about 50-plus miles of country roads. To fully appreciate the Pinnacles you have visit the west side to see the whole rock formation splayed out in all its glory. Melissa and I did that in October 2000, and since then I’ve been wanting an excuse to return. 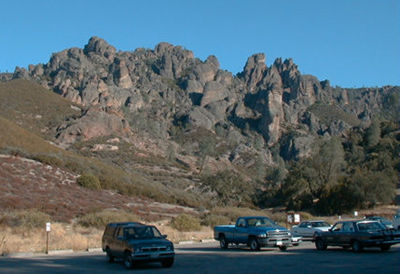 Here’s a picture of the west side of Pinnacles from our 2000 visit. The Monument is a busted-up volcano that had the bad fortune to form along a major fault line. Earthquakes blasted the hell out of it over millions of years, leaving all this wreckage to amaze human gawkers.

Yesterday we came in on the east side and hiked up into those rocks. . 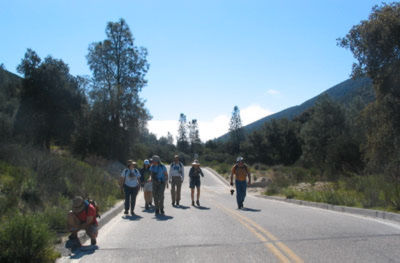 Most of us heading down a patch of road to pick up the trail; we had 11 hikers this time, the most of all the FOMFOK hikes I’ve gone on. The Pinnacles bring out the hiker in everybody.

The park gets fairly crowded at this time of year, so we took a less-peopled path to the top of the rocks. It was sunny and warm in the park, unlike the Bay Area, which was soggy and foggy all day. 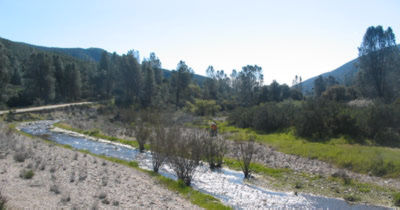 A little running water on one of the last flat spots on the trail. From here it’s two grades — steep and steeper — up to the Pinnacles. 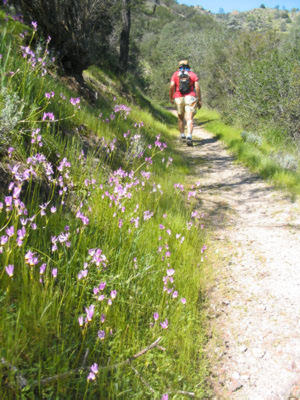 Wildflowers decorate the parts not beaten down by human traffic. 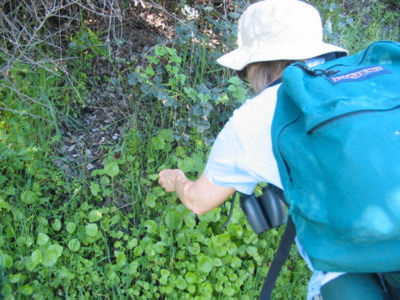 Zona, a natural born naturalist, plucks a bit of miner’s lettuce, an edible green far more common than gold in these hills. I ate one too, just to prove I wasn’t intimidated by flora found outside the supermarket produce bin. 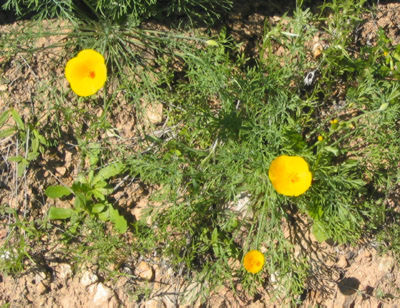 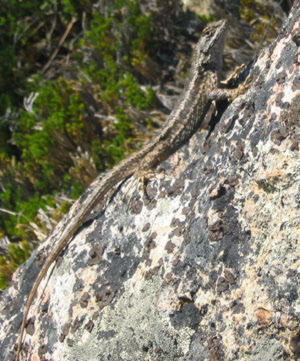 We saw lots of lizards working on their tans on warm chunks of rock.

One of many rocks seeming like a large mammal turned to stone. This was either a dog or a rhino, we decided. 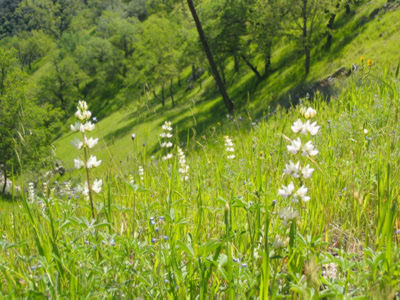 Amazing what can grown on a hillside. 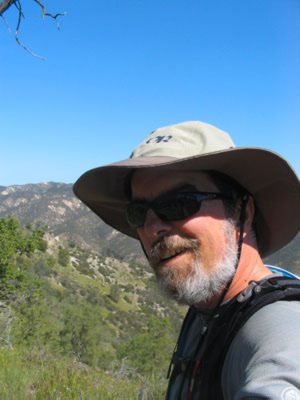 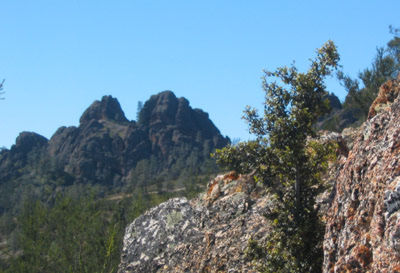 Now we’re getting close to the top of the High Peaks Trail, which threads its way through all those rocks visible from the west entrance. 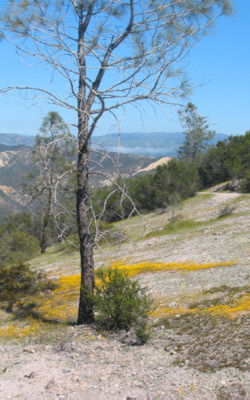 Little yellow bits of something bloom on an otherwise gray hillside. 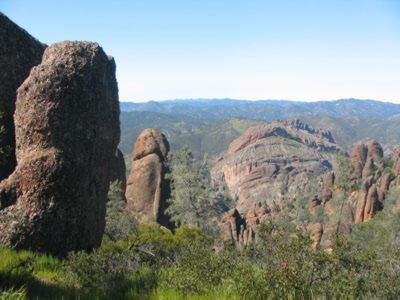 These are some of the actual pinnacles. Some of which were stunningly phallic in shape. 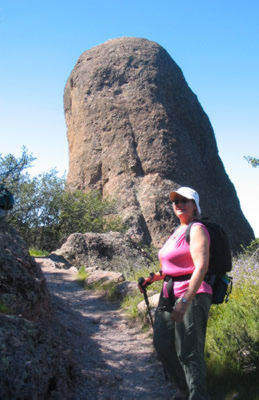 Molly has hiked all the park’s trails. 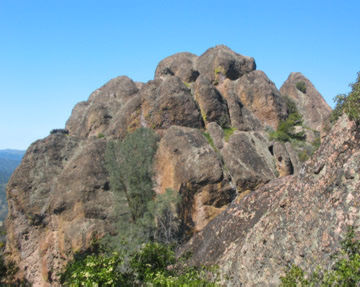 Just a big ol’ stand of rock — don’t worry, it’ll still be there when you visit the park. 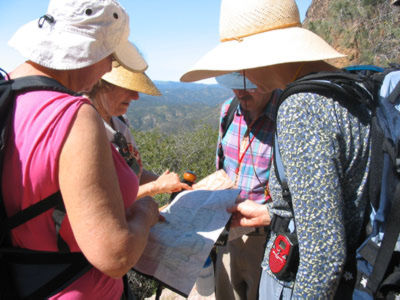 Major consultation over proper paths to follow. We ended up splitting into two groups, with some of us going downhill to check out tunnels, and the rest going uphill to climb steep, narrow, occasionally harrowing trails. I went with the latter half; color me harrowed. 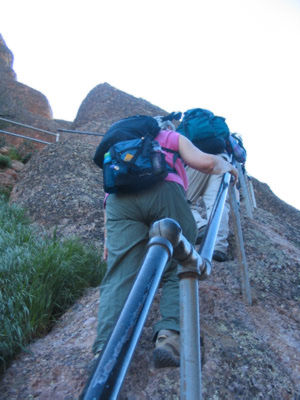 Footholds and handrails are built into this rock face. It’s almost vertical at first; I’m sure the view’s wonderful but I was watching my feet and holding on for dear life, so I didn’t see much of it. 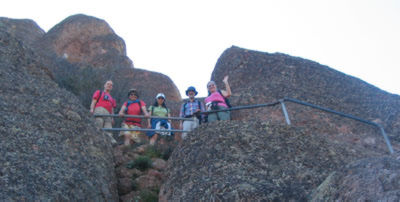 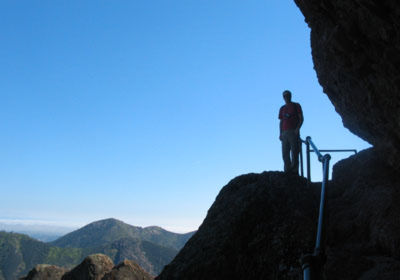 This is Norm, whom I met for the first time on this hike. He rode all the way down to the park on his BMW motorcycle — now that’s a guy devoted to hiking. 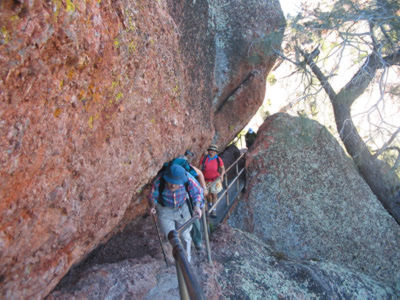 Maurice, the nature photographer I met a couple hikes ago, scrapes his backpack along the rocks. Turns out Maurice’s birthplace is only about 20 miles from mine; he was actually in Peoria last week visiting relatives who live in nearby towns. Even among huge rocks it’s a small world. 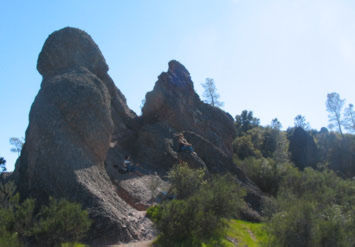 An excellent natural resting place at the top of the Pinnacles. Also excellent because there are restrooms nearby.

From here it’s back down the trail. I figured, what’s there to see on the return trip? Quite a bit, it turned out. 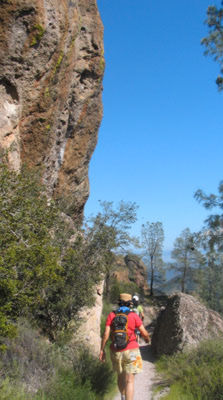 The trail’s cut right into the hillside here. 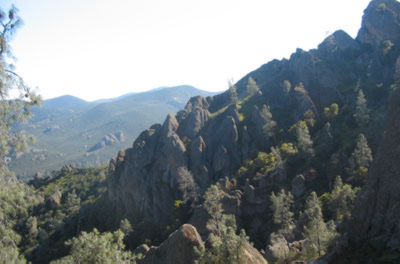 Up-thrusting rocks are all over the place up here. 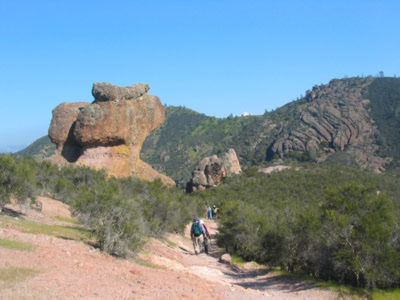 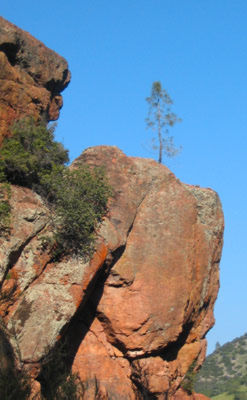 I thought of "A Tree Grows in Brooklyn" when I saw this tree emerging from a cliff side. 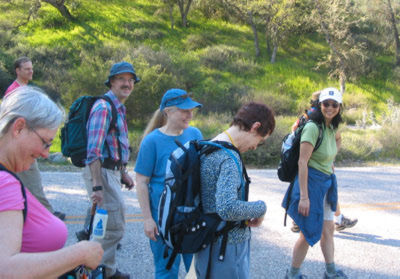 Back at the parking lot, people can’t help but smile after a hike like that.