Yesterday it was back to Ed Levin County Park, the one just down the road from our place. The park attracts lots of people trying to catch fish at Sandy Wool Lake or imitate soaring birds with the Wings Of Rogallo hang-gliding club, but the trails don’t get many takers. In fall, winter and spring there’s too much mud, and there’s too much blazing sun in the summer.

I was five hours on the trail yesterday before seeing any more hikers, a fairly typical outing. The few of us who hike here learn the virtues of solo hiking.

The trails here aren’t maintained worth a damn, truth be told. After it rains, the park’s primary residents — cows, bulls and their progeny — ply the main paths, their hooves chewing the hell out of the soft, wet sections, which become gooey moonscapes. The cattle also crap everywhere, which isn’t a big deal when they drop a load on a nice, dry patch of dirt. You can see that and walk around it. The gooey sections are the problem, because hooves act like a blender, mixing poop with mud and making it inevitable that you’ll come home with stinky shoes, socks, pants, etc. .

There’s a classic Catch-22 here: Hikers avoid poorly maintained trails, which aren’t maintained because hardly anybody uses them. Not that I’m complaining, I like having the place to myself sometimes.

It’s still wildflower season. The park isn’t exactly exploding with color (I suspect the cows eat many of the blooms), but there are enough splashes to keep a hike interesting. 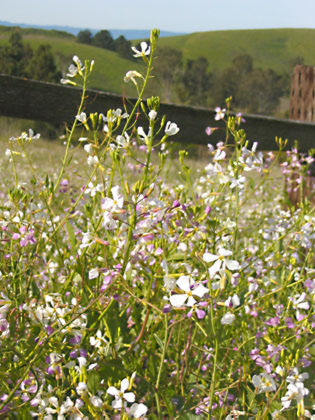 I saw these at the beginning of the trail. There’s a whole field of them on the other side of that fence.

A hang-glider waits for favorable winds. They were plentiful — the skies were dotted with winged gliders and paragliders all day. 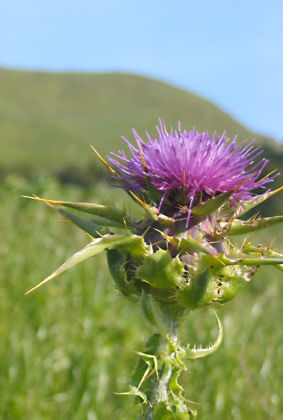 I’m walking along a meadow with not much to see except lots of grass, but then this thistle-looking thing pops up in the middle of it, the only color other than green for a hundred feet in any direction. It’s actually called a milk thistle — I’ve seen the dried-up hulks of hundreds of them in this park, so they must be just coming into season. 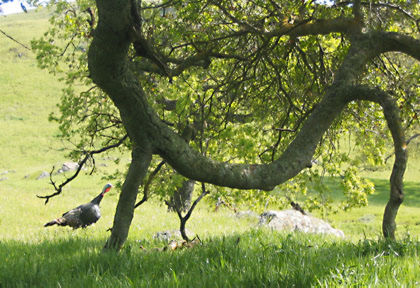 Wow, a totally cool tree AND a wild turkey. Ed Levin must have dozens of wild turkeys, I see them every time I come here. They make that "gobble-gobble-gobble" sound and pretty soon you see them strolling nonchalantly across the trail. 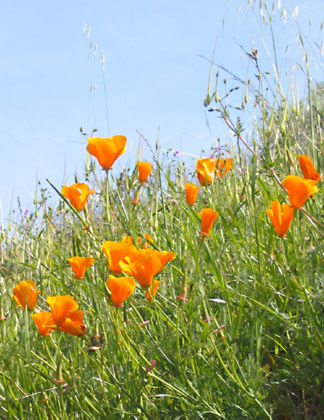 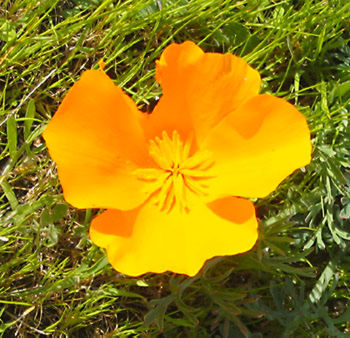 I thought of Charles Darwin looking at a flower like this poppy and the lightbulb going on in his head: the cup-shaped blooms capture water, creating an evolutionary advantage for species that grow on hills where moisture drains away rapidly. 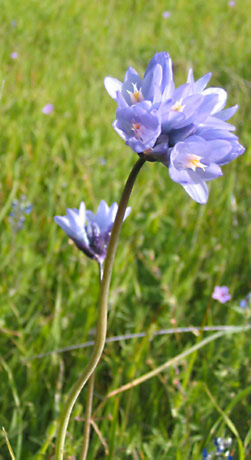 I’m pretty sure this beauty is called a blue dick. (Insert "Dick" joke of your choosing here.) 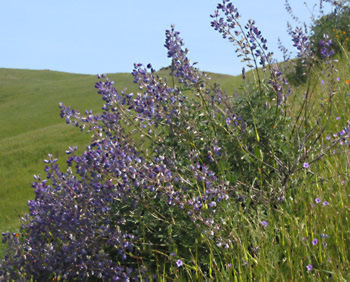 This picture sort of encapsulates what the park looks like about now. Mostly lots and lots of grass, with these bright oases. 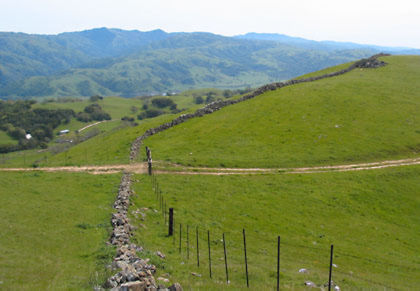 The green hills of spring won’t be green much longer. This is an old rock wall near the summit of Monument Peak … not sure who built it, or why, but it’s a cool thing to gaze upon. 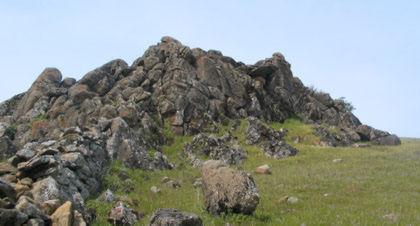 Here’s a shot of the Monument Peak summit that gives the impression that it’s a jagged mountaintop. Actually there’s an old gravel road on the other side of these rocks; you have to go to a lot of trouble to find a difficult way to reach the top of this hill, which is what I did, walking up a hillside next to the rock wall, which ends at this rockpile. 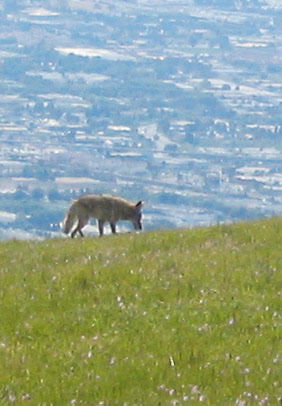 Saw this coyote wandering along the ridge near Monument Peak. Kind of him to do his wandering in an area with a dramatic backdrop. It’s remarkable how much unlike a dog a coyote is, despite looking almost exactly like one. Dogs are tame, and, hence, silly. Coyotes are wild, and, hence, cautious. Dogs keep their tails in the air because they’re always so happy; coyotes keep theirs close to the ground to avoid catching the attention of of potential prey. 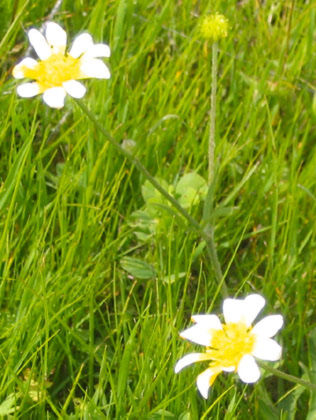 I took a shortcut to avoid some muddy trails and almost stepped on these dainty little blooms (California asters). 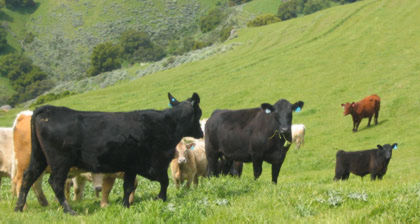 Cows taking a break from their usual chores, that is, crapping everywhere. 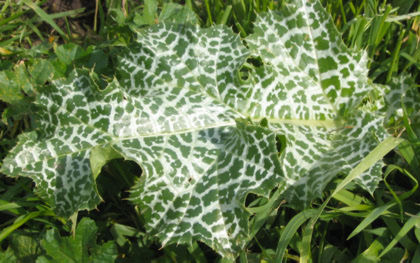 This is just a thorny old weed, but the zebra-pattern looks cool up close.

Some kind of lupine, I think. 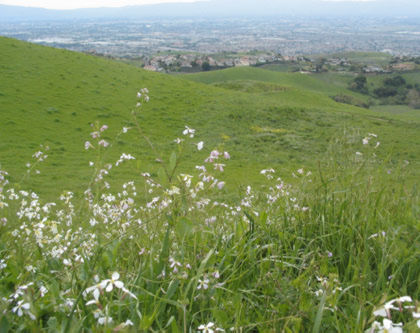 A sprinkling of white…. 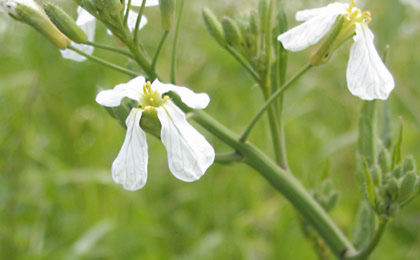 … makes these blooms that look like poppies turned inside out. Possibly a wild radish. 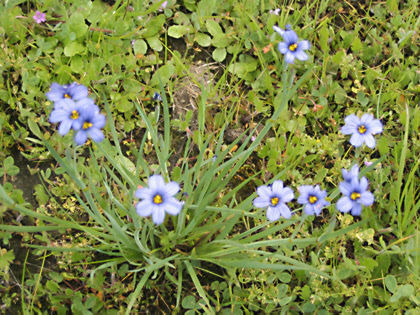 Blue-eyed grass is what they call this. 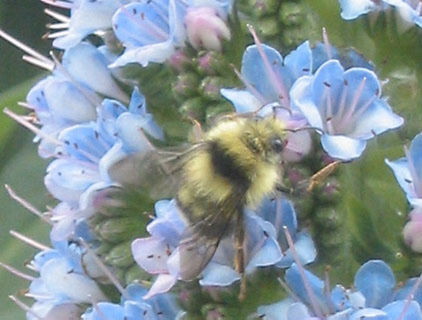 Not a wildflower — just a flowering shrub with a bee crawling across it.