Operative adjective of the past few days has been "scalding."

Well, scalding by our standards. It’s not like the brutal 95/95 (degrees/humidity) that we’ve known in Tampa or the insufferable 103/92 we’ve known in Peoria, but even when there are alleged Pacific Ocean breezes in the vicinity, everything north of 90 is plenty hot enough, especially when there’s no air conditioner in the ol’ homestead.

It’ s been so hot that I’m just now getting around to posting pictures, and it’s still warm enough that extra typing tempts one to work up a sweat, so I’m keeping this week’s post short and to the point, which was: it was so hot that a person standing right in the middle of the San Francisco Bay could expect no relief.

I went along on a FOMFOK hike because Mike had thoughtfully chosen Angel Island State Park, an easy hike up a manageable hill, less than five miles, less than 800 feet of climb. Gorgeous scenery and cool Pacific winds. No sweat, right? If only. 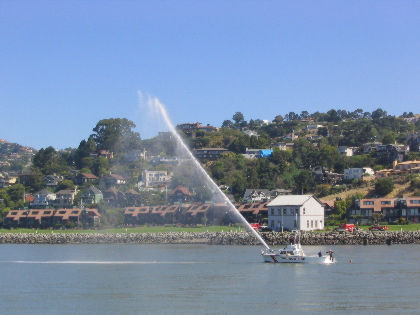 How hot was it? Well, the local Coast Guard was seen watering the Bay near Tiburon. 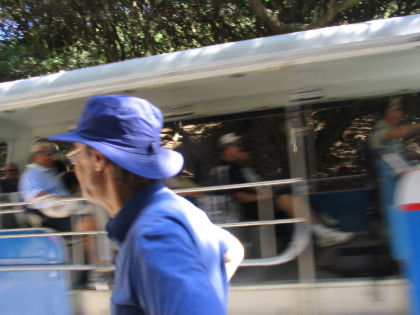 I could say it was hot enough to blur one’s vision, but I took this picture before the hike actually started. Someday I’ll know how to achieve these cool arty effects intentionally rather than by accident, but I suppose that would take all the fun out of it. 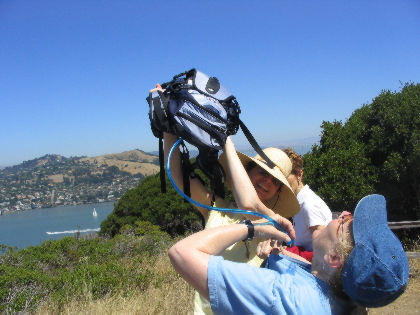 After the first mile or so, the women were resorting to any means necessary to apply cooling fluids to warm areas. 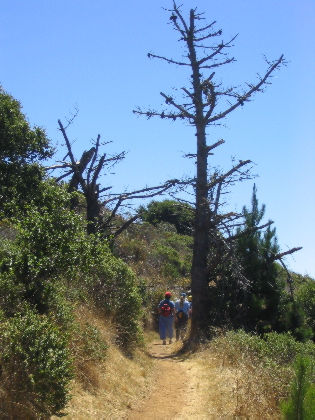 OK, that tree was already dead long before the current heat wave, but it seems to capture the mood of the afternoon. 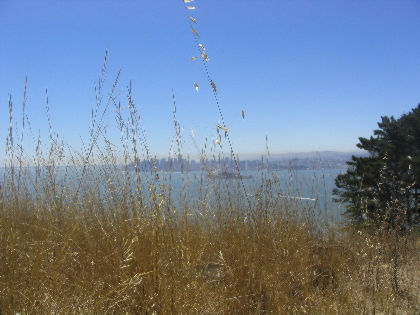 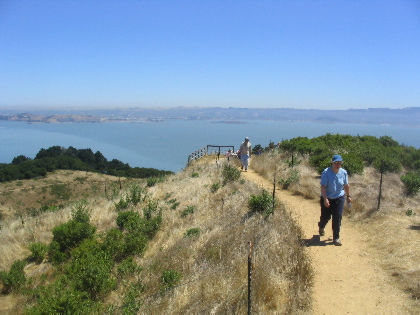 Nearing the final trudge to the top of Mount LIvermore, where the operative question became "how long are we planning to stay up here in this sun?" 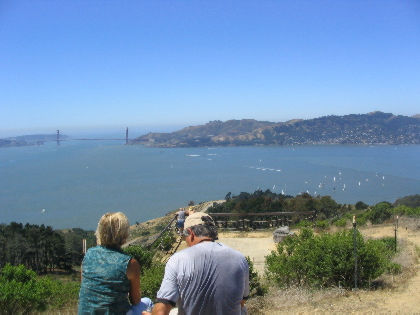 OK, so there was a great view up there. We pondered it for about 90 seconds and bolted back down the hill toward the shady trails.

That was Saturday. On Sunday I developed an absurd urge to hike over to Mission Peak from Ed Levin County Park. Rather than do the wise thing and pop a beer to quell such an urge, I acted on it. Hiked 12 miles with over 2000 feet of climb, basically baked the whole way and came to the conclusion that there was a good reason I was the only person on the trail Sunday: everybody else had enough sense to get in out of the heat.

OK, all this typing is getting me overheated, better call it a day.