If you read up on Henry Coe State Park, the first things you’ll learn are a) the hills are hell; and b) hiking there in late summer is madness.

I was one of a few brave fools to hit the trail at Henry Coe on Sunday, when it was over 80 by 9:30 a.m. and north of 90 by noon. I was looking for a place called Mount Sizer, mainly because the route to its peak requires a climb up the infamous Hobbs Road Short Cut, a gravel road that runs pretty much straight up a hillside for 1,500 feet in 1.3 miles, a 22 percent grade. I’ve been climbing 2000 feet in 2.6 miles at Mission Peak a few times a week all summer, so I figured, how hard much harder than that could it be?

Henry Coe State Park is nothing but ridges and valleys. The hikes go up, they go down, they almost never go flat. To hike here you have to be ready for many hills. To hike here in summer you have to be ready for blazing heat. And you have to carry enough water to keep sweat moving though your pores. Otherwise you’ll just dry up and whither away. If you were a tree, you’d have it made because you’d have all these roots going down deep where the last drops of water lie. But trees don’t get much hiking done.

The Short Cut ends at the top of a ridge about 5.5 miles from the park headquarters by the, uh, shortest route. I took a longer route that made my total hike clock in at about 13.5 miles. For those who’ve heard Henry Coe horror stories but never experienced them firsthand, trust me: they’re all true. And let me add for emphasis: The view from the ridge atop the Short Cut is exactly like the view from every other ridgetop in the park. Unless you crave suffering or run marathons, there’s no earthly reason to go there — especially in the heat of summer.

So here’s how my Sunday went: Got to the park about 9 a.m. Had more than a gallon of water in my pack, plus lunch, and my trusty water filter, just in case that gallon wasn’t enough. It wasn’t, but I’ll get to that part later. Took my hiking poles along because they’re so much help on hills and long distances. Naturally, one of them refused to be adjusted properly so I left ’em in the car. A minor annoyance in a day full of them.

The one smart thing I did was start out on the Flat Frog Trail, which hugs a hillside and is as even as the name implies: Absurdly easy for Henry Coe. Slight inclines, all shaded, a simply wonderful patch of dirt that provides a nice little warm-up on the way in, and a nice cool-down on the way out. Most people bypass this trail to prove they’re tough enough for the shorter main route, which requires a 500-foot climb on the way in and on the way out. Most people are lunatics, though not quite as loony as yours truly. Once I got past the Flat Frog Trail and onto Hobbs Road, I saw nobody for the next six hours.

As soon as I got off the Flat Frog and onto Hobbs Road, I started going up. A nice friendly climb for maybe a mile or so. Got to the top of the ridge and started going down. And down. And down. Here the trail drops about 1200 feet in a little over a mile and a half. And I’m telling myself, this is going to suck on the way back because it’ll be up and up and up and up. And there will be the small matter of having climbed the Short Cut, so I’ll be just a tad tired.

After awhile I got to the bottom of the trail at a crossing of one of the forks of the Coyote Creek. The Short Cut starts on the other side. I look up and think, "Christ, that IS steep." The sane thing to do would’ve been to turn back, but one look at that trail gives me an incurable case of Summit Fever. 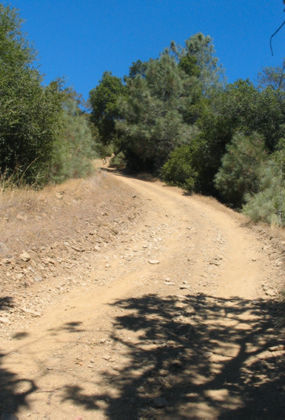 So here’s one look at the dreaded Short Cut. It’s a lot steeper than it looks here.

It’s getting toward noon, and I’m trudging from one shady spot to the next, resting up and enjoying the breeze rapidly drying out my perspiration, which is what’s supposed to keep me cool. It works as long as I can keep the water flowing in.

I climb and climb and climb and climb. I know I’m getting close to the top because I can hear the wind blowing through the leaves of the trees at the top of the ridge. I’ve been sweating so hard that I can taste the salt deposits on my upper lip. I can’t remember being this worn out on the trail. But I’ve got the Fever, so I keep going up. Taking little shuffling steps just to keep moving.

I finally got to the top of the ridge and noticed a sign that said "Mount Sizer, 1.7 miles." I looked around and saw nothing notably more mountainous than the place where I was standing. That’s what told me I had gone far enough. 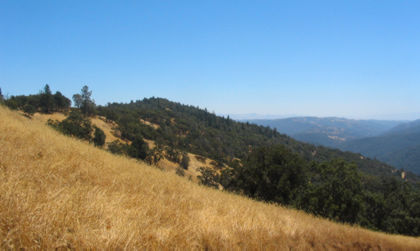 The top of that hill is, presumably, Mount Sizer. Not exactly Everest, if you know what I mean. 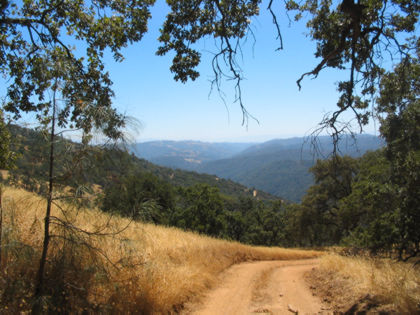 On the trail back down toward Coyote Creek. These hills aren’t so tall, but try climbing more than one in 90-degree heat. 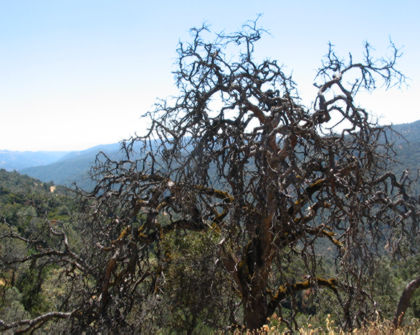 One thing I like about Henry Coe: It has impressive snags. This one reminds me of Medusa, with one difference: walking past it turns your legs to stone.

OK, so now I’m working my way down the Short Cut and I see a post that says "Sada’s Spring." I remember reading somewhere that the spring runs all year, so I figure it’ll be a good place to refill my one-liter water bottle. Of course it could not be close to the trail; it has to be about a hundred yards into the woods, and since nobody comes here this time of year, the trail’s all grown over. But I pick my way through the brush and come upon a trough with a little pipe trickling water. The water’s cool and feels like heaven. I break out my filter, pump my bottle full and say a happy Thank You to those responsible for me finding this spring.

Then I turn back, get momentarily lost in the woods, stumble through some brush and find my way back to Hobbs Road. There’s something scratchy at my hiking shorts’ legs, so I look down and see that both legs from mid-calf to ankle are covered in these little burrs that come out only by ripping whatever fibers they are attached to. In my case these fibers are the hairs on my lower extremities.

I walk back down to the creek, wondering if perhaps water will make them come off more easily. It doesn’t. I end up just plopping down in the creek so I’ll have someplace cool to sit while I’m ripping out my leg hairs. Spent about a half-hour there, plucking those little bastards out one by one. I silently curse the memory of Charles Darwin, who no doubt would’ve been amazed by these little plants’ adaptation: spreading their seeds by attaching themselves to passing creatures.

And once I’ve got this disgusting job done, there’s the small matter of climbing a mile and a half back up that ridge between me and the parking lot. I realized something amazing in the midst of this terrible slog: The exhaustion going up this way felt just like the exhaustion going up the Short Cut. It wasn’t me, it was the hills.

When I got back to the park headquarters, I met a few backpackers just returning from their own 12 miles beyond the River Styx. They had met a father and son about two miles from the HQ who had neglected to bring water on their hike. The backpackers gave ’em all their water, and hiked dry the last two miles. They were sweaty, tired and miserable but in the midst of their suffering they had room left for a good deed. Sorta redeemed the whole day for me.