What’ll people do to get on television? We found out a bit on Saturday when K half of the FOMFOK hiking group, and a friend of hers from work, took to the Santa Cruz Mountains to prepare their entry video for The Amazing Race. You need 3 minutes of video demonstrating you’re the kind of plucky, interesting people who make for Great Television, which can manifest itself in any number of ways. K, whom we generally call Kathy, is the rugged, able, outdoorsy type, while her friend Monica is the pampered princess type.

With Mike (the M half of FOMFOK) as cinematographer/director/executive producer and the rest of us along for moral support, FOMFOK headed for the Monte Bello Open Space Preserve, which has miles of trails up and down the hillsides, and a couple streams to cross — or as our future TV stars saw them: obstacles to be overcome on video so the Amazing Race people would see how plucky and reliant the entrants are in the face of rushing waters and other challenges. 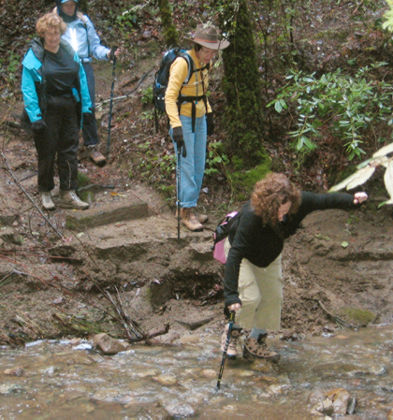 Monica picks her way across a stream along the Stevens Creek Nature Trail. Later it occurred to us that as stream crossings go, the difficulty factor on this one was about 3.5 out of 10 — but hey, the video could be edited to trump up the excitement, right? 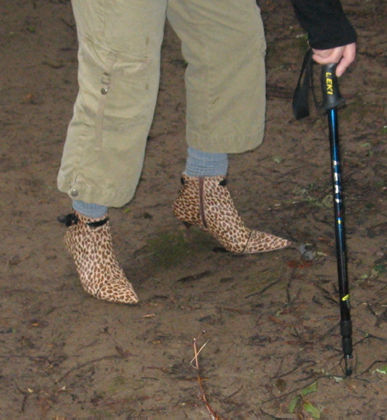 Monica toted these snazzy boots the whole way just so Mike could grab video of her walking out of the stream and hiking down the trail in them. Another gem for Mike to splice into the video (I recommend a jerky quick cut). There seems to be a lot riding on Mike’s filmmaking techniques, the extent of which I have no clue, beyond the fact that he owns a cool digital video camera and knows all the best gags from "Young Frankenstein" and "Monty Python and the Holy Grail."

Kathy, though, is a foremost Amazing Race authority and has a strong handle on what kinds of people get on the show. Monica, meanwhile, seems to have a strong handle on the humor/absurdity of the venture. I like their chances, but then again, I’ve never watched the show. 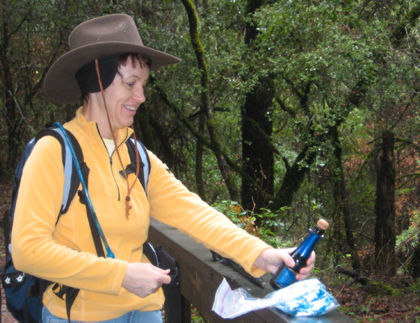 Now if Kathy were trying to get on my reality TV show, she’d outpace all the other competitors who neglected to pack New Year’s champagne for the hike. 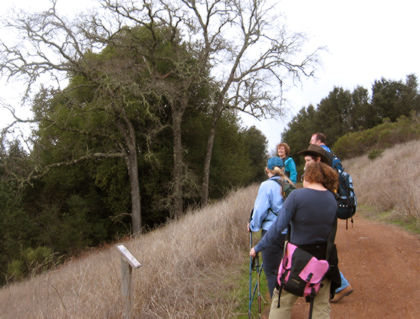 This is around the point where Monica started wondering when the hike was ending and the post-hike festivities were beginning. Just another mile or so, we assured her. All uphill, mind you, but I assured her she looked healthy enough to survive the trip back to the parking lot.

This was a fun little four miles — so much so that I passed up many opportunities for cool tree pictures. But hey, they’ll be there next time. And if Kathy and Monica are international television stars by this time next year, remember you saw them here first.

More on the Monte Bello Open Space Preserve here. The trails here are well-maintained and the scenery’s gorgeous — sometimes you have to dodge the mountain-bikers but otherwise it’s a fine hiking locale.