So I’m on my way to Murietta Falls, trudging up a section of the Ohlone Wilderness Trail popularly known as The Big Burn; possibly so titled because of a fiery regeneration of the plant life years ago, but certainly because it’s 1,400 feet of climb in less than two miles, coming on top of the 1,800 feet of climb in two miles required to get this far. Your legs, they burn here.

It’s the prettiest part of the trail — tree-lined, full of dense vegetation that breaks to offer expansive views of the surrounding ridges. A delightful place to be if, say, dropped in by a helicopter. The scenery is just compensation for the grind.

So anyway, there I am, huffing it up the hill, when behind me I hear this Harrump-umph-Harump-umph — the oddest grunt imaginable in staccato couplets. I turn and see a blue blur and for a second I get a cold shiver of fear down the spine. "Bear!" I thought for the first nanosecond. "Sasquatch!" I thought next. Finally my eyes and my brain reached agreement that the form coming up the trail and the accompanying double-grunts belonged to a woman running out here, with her running partner right on her tail. The terrible sound was her labored breathing. She smiled as she passed, oblivious to the fact that I had just mistaken her for scary beast of the forest.

They passed me again several hours later on the way back to the car, and were just finishing up their cool-down/stretches when I got to the parking lot. Turns out they are ultramarathoners in training for a 100-mile race. They had just run 20 miles in six hours and were disappointed that the mud on the trails slowed their pace. They’re happier with four-hour times.

I walked a little bit less than half as far (12 miles) in 7 hours and was happy to make it back to the car before they closed the gates at Del Valle Regional Park at sunset. One thing about hiking, you meet all kinds. These were the second pair of ultramarathoners I’ve met on trails in the Bay Area. It sounds insane to think of jogging for a hundred miles, but almost anything can seem insane to the person not doing it.

Yeah, I took pictures, though not of the mega-joggers. I think they’d have paid me not to take their picture if the transaction could’ve taken place without forcing them to break stride. 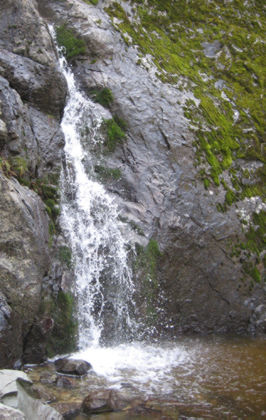 I left my camera stowed until I got to the falls; this is the lowest section. Murietta Falls is the highest waterfall in the Bay Area at 3,000 feet. A tiny stream, barely a foot wide, pours down from the nearby ridges and cascades over a cliff for about a hundred feet. The falls are purely temporary — they happen only when there’s been enough rain to get a flow going in that little streambed. It trickles down through an impressive pair of rock formations on each side. 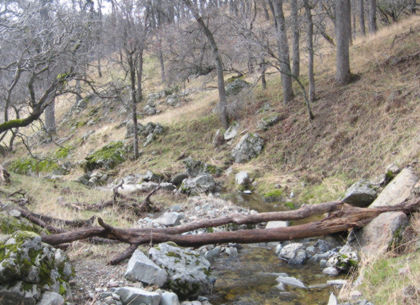 There’s a rather treacherous path down to the base of the falls; this is the steam continuing down the hillside beyond the falls. 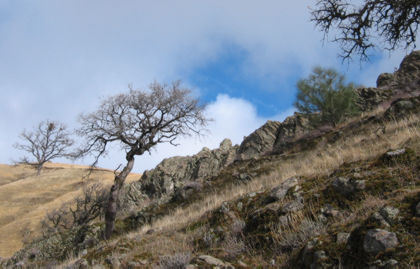 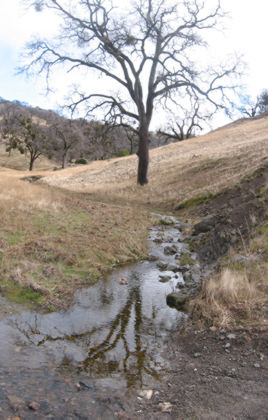 It’s just a trickle here as the stream that becomes the falls crosses the trail.

The elegant curve of a ridge line caught my eye on the way back from the falls. 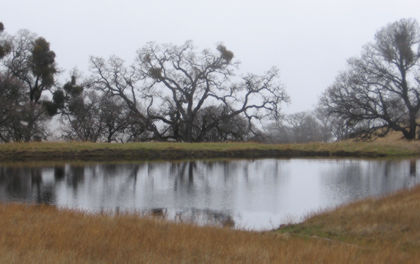 This pond is about five miles from the parking lot. Once you’re here, you’re almost to the falls. 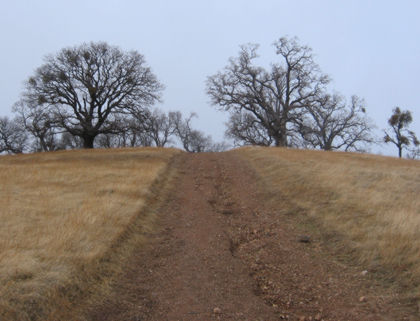 One little steep bit of trail goes to the top of the ridge, then it’s all downhill for the next couple miles 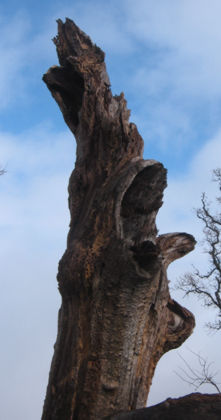 Yes, there has to be a dead tree. 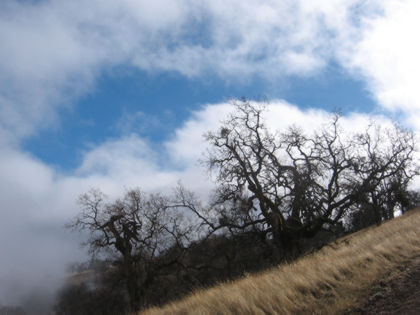 Clouds, trees, patches of blue sky. These are all I require in my viewfinder. 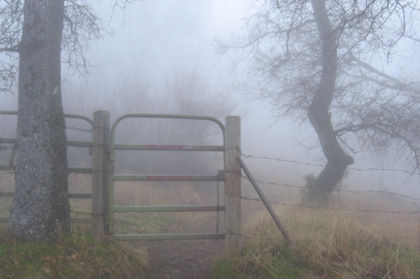 Clouds encased the hills on the way back. This little gate is about halfway down the Big Burn. 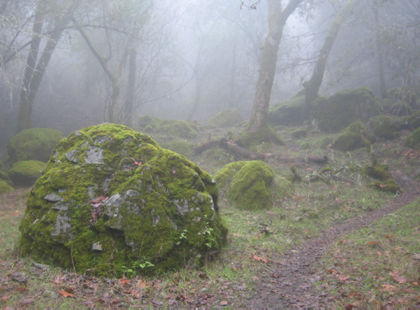 It’s green as all get-out at the bottom of the Burn. From here there’s one more 500-foot climb, then it’s all downhill back to the parking lot. 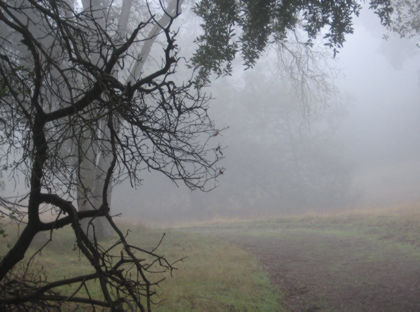 The bits of blue sky in the previous pictures were the exception. Much of my day looked like this.

I’ve gotten rained on the past two times I’ve gone up the Ohlone Trail from Del Valle Park. I’ve endured the calf-burning climbs and toe-crushing descents, experienced undiscovered flavors of exhaustion each time. Is the scenic splendor worth the effort? Sure, but I can drive my car to the edge of the continent for scenic splendor.

Doubts about my strength and endurance kept me away from this trail for months. My first hike to the falls was 19 kinds of brutal, but I made it back in one piece. It’s funny how this works: Once I know I can, I realize I must.