Six miles into Portola Redwoods State Park is the Valley That Loggers Forgot. The park is in a section of the Santa Cruz Mountains where enterprising, forward-looking entrepreneurs clear-cut acre after acre to answer the Bay Area’s growing demand to be civilized. Some of the hills along the way to the park are covered with tall pines as far as the eye can see. Others are treeless bumps covered in green grass. Once you’ve been to the Valley, you’ll never see a barren knob the same way again.

Portola Redwoods’ fate is to be the poor relative of the spectacular Big Basin Redwoods State Park a few miles down the road. One thing it has going for it is that few people know it’s here, which means small crowds and quiet hikes. An ambitious trekker could cover all the park’s trails in a weekend campout. It has a hike-in campground about three miles from the park HQ, and more than 50 drive-in campsites. Not ambitious, but possibly available, which can be a big deal on a summer weekend.

I spent my Memorial Day hiking out to the park’s Peters Creek Loop. My route started out with three easy uphill miles on the Slate Creek Trail to the walk-in campground. There’s a privy and picnic tables at the campsites but no water, but it can be filtered from a creek nearby. There’s a big sign advertising a strenuous seven-mile out-and-back trail, warning to leave enough time to get there and back before dusk.

The trail climbs gradually for about two miles or so, then plunges steeply toward Peters Creek. After six miles of walking through serene but unremarkable forest, you wander down a hill and find yourself smack dab in the Land of the Giants. These are ancient Coast Redwoods whose survival probably caused a citation to be placed in the permanent record of the logging crew foreman who thoughtlessly failed to cut them all down. 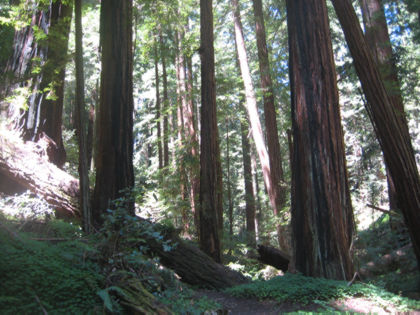 The grandeur of these trees never disappoints. It’s a bit of a trek at six miles to get here, but if your feet can handle the miles, it’s well worth the effort. 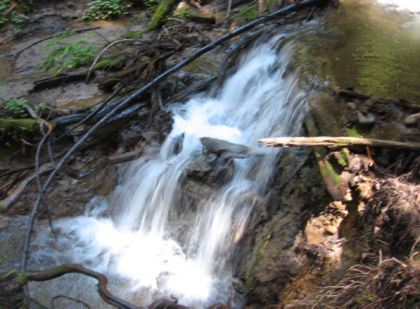 A nice bit of falling water over one of the creeks in the valley. 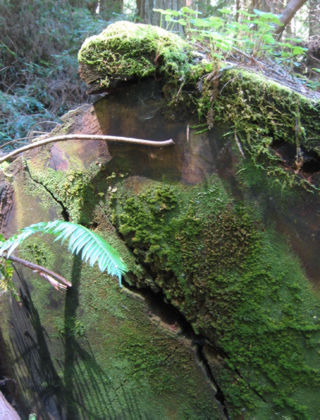 The tree’s long dead but life abides there anyway.

So you have to cross a creek and hike on for another quarter mile or so till you see a junction where the sign post has arrows saying "trail" going both ways. This is the start of the Peters Creek Loop; you can go either way and return to this spot, then head back the way you came. 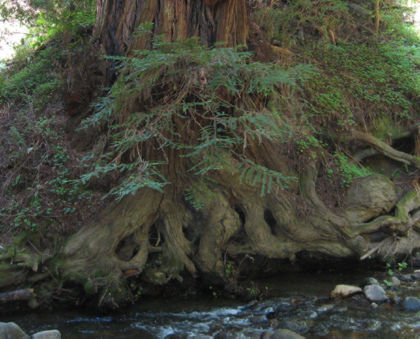 The loop threads its way through ancient redwoods by the dozens. For my money the most interesting sight was the exposed roots of this old giant. The lighting down here is terrible for point-and-shoot shutterbugs like me because the automatic flash will want to kick in, but the flash ruins the picture. You really need a tripod to get a sharp exposure in existing light. 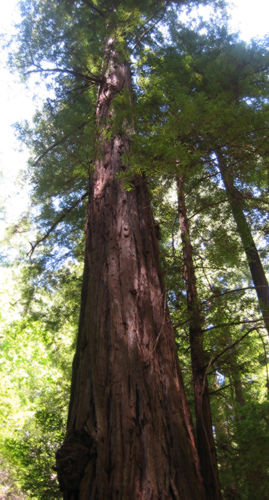 Completing the 1.3-mile loop requires a couple stream crossings, but is otherwise easy.

There hike back up out of the valley is brutish but short, only about a half-mile or so. 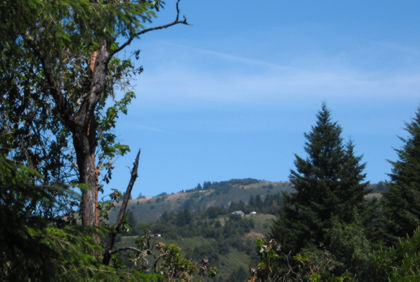 One of the few gaps between the trees in which nearby terrain is visible.

Once you get back to the top of the ridge, it’s five easy miles back to the park headquarters. Overall, I suspect Portola is among the least-spectacular of the state parks around the Bay Area, but if you need some time alone in the woods, this is the place to get it. The trail camp is a great place to take little kids backpacking; I saw one dad returning with a little boy and girl, ages about five and six, who were chatting amiably the way kids do when they’re having fun (nothing worse than silent kids in the outdoors, except perhaps noisy adults).