I knew I wanted to hike somewhere on Sunday; I just didn’t want to hike too hard, or think too hard, or drive too far. When the lazy gene kicks in, I start thinking about places where the pictures take themselves. California has hundreds of such locales, but none like Sunol Regional Wilderness, which is picturesque 365 days a year and strategically located mere miles (as the turkey vulture flies) from our East Hills homestead.

OK, so hiking 10 miles at the Wilderness is not precisely lazy, though I did walk very slowly most of the way. Sunol is in the middle of the Diablo Range, whose hills could fill a hundred photo albums, though I can’t imagine a sane shutterbug attempting such a feat. You’ve heard it said "the hills have eyes"; well, I’m not that paranoid but there were times when I’d have settled for "the hills have legs," if only I could borrow a couple.

Sunday’s goal was to return to the Maguire Peaks Loop, where I had hiked the winter before last, hoping get an up-close look at these twin rock formations visible from the I-680 freeway on the ride southward toward Fremont. Got a lot of fog in the picture frame that time, but not as much peak as I’d have preferred. Got plenty of sunshine this time (more than my sunburned arms would’ve preferred, no doubt. Yes, Mom, I neglected to apply sunscreen. I blame society.).

So the trick to hiking to Maguire Peaks is to make your way to one of the trails leading to the Maguire Peaks Loop. These trails are along Welch Road, which is a mile or so north of Geary Road, which leads to the park headquarters. The benevolent keepers of Sunol Wilderness require hikers to make a special trip to the park HQ to acquire a permit to park on Welch Road. The other option is to hike to Welch Road, which is what I did. Sure, I’ll hike four miles in the blazing sun to avoid a 30-second bureaucratic hassle that delays my hike by 15 minutes. Damn this lazy gene — so helpful at avoiding the dinner dishes, yet able to betray me on a whim. 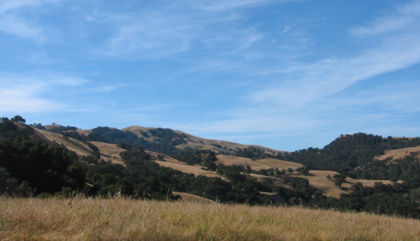 If you bullheadedly insist on walking, the easiest route to Welch Road is up Hayfield Road to High Valley Road (hang a left at the windmill), then follow the signs pointing toward Maguire Peaks. The trail goes rather sharply down into another valley, requiring the brain to enter Full Denial Mode to avoid thinking of hiking back this way.

The trail ends at Welch Road; it resumes at a parking area about a quarter-mile to the west. 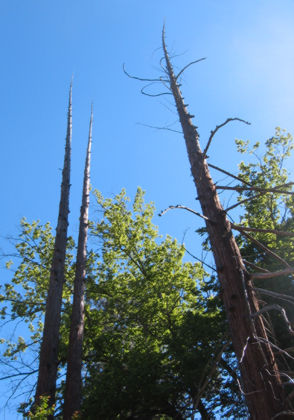 These remnants of pine trees are one of the coolest sights on the trail. 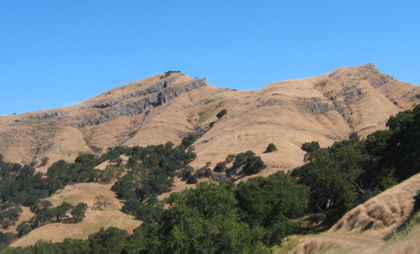 After more climbing than seems entirely necessary, the peaks appear. They’re not terribly impressive, I admit, but are entirely in keeping with the ambition-challenged theme of this outing. 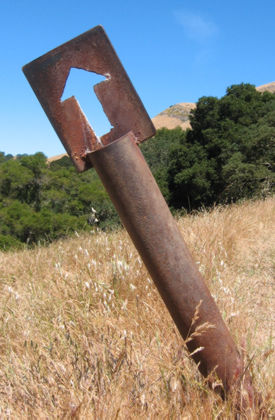 I accidentally stumbled upon the Lower Maguire Peaks Trail, which has these nifty old-fashioned trail arrows. 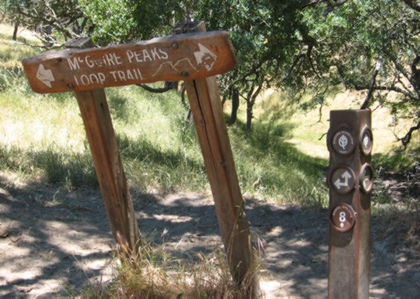 The sign-maker for the loop trail thoughtfully selected an alternate spelling of Maguire. Nothing like having all your bases covered. 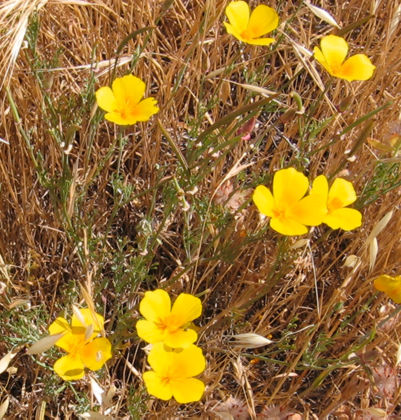 There’s a couple steep spurs off the loop trail that go to the top of the tallest peak. A few of the season’s remaining wildflowers temper the drudgery a bit. 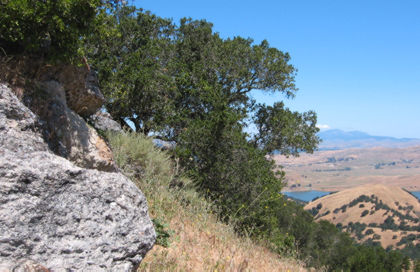 The view from the taller peak is stunning. I could see Mount Diablo to the north and across the San Francisco Bay to Mount Tamalpais (features typically lost in the summer haze).

After hiking down from the peak I paused for lunch in one of the few shady spots along the loop. A couple hikers coming up the trail had a beautiful German shorthair hunting dog tagging along. The dog trotted up next to me, lifted one paw in the air and, as if on cue, pointed his nose directly in front of us as if to say, "do something about that quail in the hedge over there." A second later the dog was gone. Riddle of the day: was there something out there or was the dog just being polite? 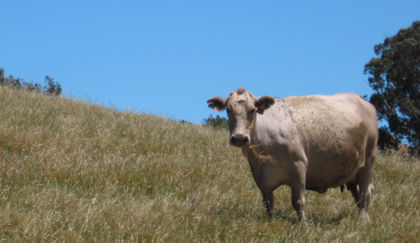 Don’t let them lie to you, the cows love having their pictures taken. It makes them so happy that they leave large piles of aromatic droppings for hikers to step in.

So I’m well into the last mile of my hike and I unthinkingly gaze over upon a large stand of cactus I had noticed during a previous hike. Damned if there weren’t blooms sprouting all over those things. My lazy gene was practically screaming about the 50 yards of tall, burr-infested grass between me and the blooming cactus, but a time comes when the lazy gene must be ignored. Cactus in bloom is one of those times. 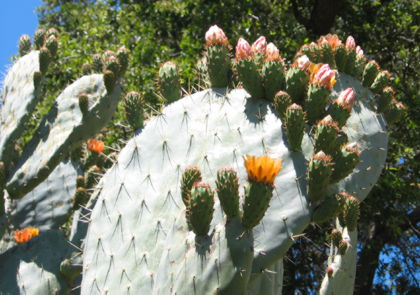 Definitely worth a closer look, even if it took me 15 minutes to pick all the burrs out of my socks. 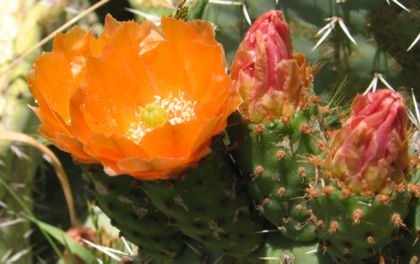 A cactus bloom is a rugged little number — it has bright petals but it’s encased in a thorny pod which gives the impression that if you tried to pick it, it would pick back.

Another 50 yards down the trail, a live tree grows from the trunk of a dead one. Stuff like that just seems to happen at Sunol.