The summer hiking season of 2009 has barely begun and already Yosemite’s Half Dome has notched its first fatality. But keep in mind that 50,000 people a year climb the harrowing “cables” route to the summit and return home to regale their co-workers with annoying accounts of their granite-scaling prowess.

The main thing to keep in mind about scaling the Half Dome summit: You could get killed up there, though the odds of survival are vastly in your favor. Yosemite’s major waterfalls all have stark warning signs that read “if you go over the falls you will die”; perhaps the latest death will inspire the Park Service to put similar signs at Half Dome, but let’s be frank: a sign won’t save you from a fatal slip-up. Here’s what I think every would-be Half Dome hiker must do first.

1) Assess your fitness and fear-of-heights issues

Summiting Half Dome requires an 17-mile hike with 4,800 feet of vertical ascent in the first 8.5 miles, culminating with an extremely steep — and deeply scary — final push to the top. People who are young, strong and fearless can usually do this hike if they’re in reasonably good physical condition; everybody else needs to ask themselves if they can really handle it. I’ve hiked in the Bay Area almost every weekend for the last five years and I’m here to tell you, that distance with that much climb is serious butt-kicking hiking.

I’ve read numerous accounts of people getting to the cables section (the crap-your-pants part near the top, where all the fatalities happen) and simply freezing in fear. Furthermore, people who do the hike talk of fellow hikers having panic attacks on the cables route, clogging up everybody else’s climb. If heights give you the willies, why torture yourself? Leave it to the thrill-chasers. 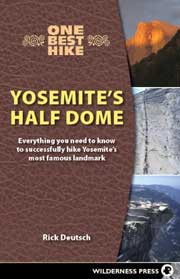 2) Research your hike in-depth before you start

Rick Deutsch, a Silicon Valley engineer, has penned a book called “One Best Hike: Half Dome” that does everything but haul you up the trail. Rick is thorough, knowledgeable and fanatically devoted to safety. He’s also hiked Half Dome dozens of times and was on the trail the other day when the latest fatality happened. Confession: I haven’t bought the book yet because I have such a leg-locking fear of heights that I see very little prospect of ever making to the top of the Dome (much less back down), but if I ever did screw up the nerve, I’d get the book first. (You can support Two-Heel Drive by clicking on this link and buying a copy at Amazon.com.)

It would be hype to say buying this book could save your life: Half Dome hikers got back safely for years before it was published. Nevertheless, you can spend hours poking around online trying to get all this information, or you can shell out 10 bucks and change and get all you need to know in one place, then bring it along for the hike if you feel so inclined. You can either hike smart by following the advice of an expert (and actually enjoy one of the most thrilling outdoor experiences on the planet), or hike stupid and have no fun and perhaps (however unlikely) perish. I’d call it money well spent, especially if someone in your family other than you is thinking of going up there. (Other recommended reads: The “Hiking” section of “Off the Wall: Death in Yosemite”

an account of hikers trapped on the peak in a lightning storm; links go to Amazon.com).

A few long, hard-core hikes with lots of climbing on the weekends before you go can get your body used to the idea of hiking all day. You’ll still face altitude issues, though camping in the park the night before should stave off the worst it it. The surest way to make Half Dome the Hike from Hell is to just show up unprepared and start walking.

Half Dome has been hiked hundreds of thousands of times. Yes, the view is stupendous, but stupendous views are a dime a dozen at Yosemite. There’s nothing to prove by going up there that you couldn’t establish by competing in a triathlon or running a marathon.

Lately Half Dome has become more like a Six Flags attraction (minus the safety harnesses) and less like an outdoor adventure — a box to be checked on somebody’s “life list.” There are far better ways to enjoy the outdoors than clambering up a slippery granite face, clinging to a narrow cable for dear life and hoping a slip doesn’t kill you.

Half Dome is one of the most magnificent rocks on the planet, best appreciated from a safe distance. Nobody will fault you for leaving it be.

So, what would I do? My inclination is to respect the rock’s wonderful magnetism and let the thrill-chasers have their fun. If you go, just do your homework and have a good time.