,” recounts the tales he collected in 40 years of hiking in the Great Smoky Mountains. A sampling was posted in the Citizen-Times of Ashville, NC: 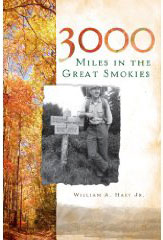 The tale then turns to Rose’s stature as a wilderness boss and to a woodland expedition he made with a friend.

As was the habit, Quill and his companion sought lodging at a cabin along the trail. That night, several young men staged a rough fight to intimidate the new guests.

“After the sham battle had raged for a few moments,” Hart records Jenkins saying, “Quill pulled out his long-barreled pistol and called to his friend: ‘John … let’s kill these SOBs before they hurt themselves.’” The fighting stopped.

Something about living in the woods produces a “let’s cut the crap” perspective.

I could almost talk myself into checking out that Sylva event: it’ll be prime fall color time up in the hills.