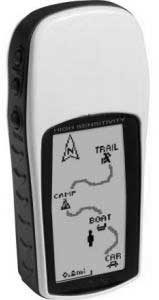 Posting GPS mash-ups of my hikes at EveryTrail has been an education in the law of unintended consequences.

Consumer GPS units came to market to do for all Americans what they once did only for the military: help navigate unfamiliar terrain. And since then, consumer GPS receivers have added ever more ways to help people navigate via satellite.

And then there’s EveryTrail: nobody there uses GPS to navigate. Most, like me, use it as a kind of electronic notebook to tell me how far we’ve gone, how high we’ve climbed. I’ve never used my GPS to navigate. Really, not even once. Perhaps the coolest manifestation of GPS users taking the future into their own hands: creating art by walking down city streets. (More on this at the New York Times, for those who missed it a few weeks back.)

Though GPS is changing the way people navigate in cars (probably for the worse, degrading their natural sense of direction), GPS has rougher sledding in the outdoors — mainly because nobody wants their lives to be riding on how long their batteries last. People take them along and use them in a crunch, but as long as I’ve been blogging, the mantra has been outright distrust of electronic devices beyond the reach of electrical outlets. Don’t expect it to be there when you really need it.

Geocaching, the most popular use of handheld GPS units, turns satellite navigation on its head: Instead of helping lost people get found, it helps people find inanimate objects that were never lost to begin with.

With GPS capability already in iPhones and coming to all mobile phones and PDAs in the coming months, it’ll be fun to see how this all shakes out. Guys drawing Space Invaders characters on the streets of San Francisco is barely the beginning.

(Speaking of GPS in iPhones: here’s an EveryTrail trip by a guy who used his for 6.5 hours — that’s when it ran outa juice — on a mega hike/run from Clouds Rest at to Half Dome — 25-plus miles. The technology’s getting more mainstream every day.)