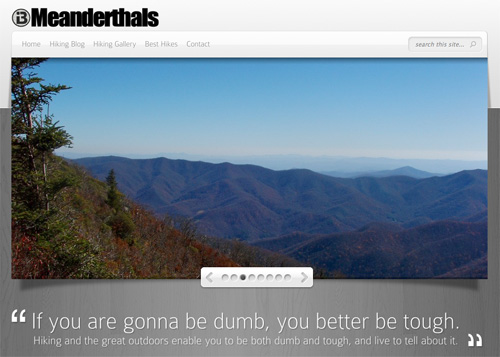 Niche: Hike reports from mainly western North Carolina, with a few diversions to the American West.

Nitty gritty: Clark is a consummate hiker/geek: a retired techie whose Internet Brothers site has gobs of tech-related gems. His operative quote — “If you are gonna be dumb, you better be tough –” defines hiking in North Carolina: The trails are rugged enough, but if you get it into your head to venture off trail, you’ll either a) become rugged or b) become mangled in the attempt.

Stuff I like: Jeff has the blogging form down pat: Clean design, thorough blogroll, well-defined scope of coverage (veering off course only for once-in-a-lifetime outings like attending The Masters golf tournament), and icons linking to Twitter, Facebook, Flickr and his RSS feed.

Jeff’s hike write-ups are utilitarian: an introductory paragraph describing why the hike matters, followed by a box with all the key details of the hike, then a Google map with GPS track, then a write-up of the actual hike, and a photo gallery at the bottom. This, frankly, is the most intuitive, useful format for a hike write-up. (Bear in mind, fellow blogger: most popular hikes have already been covered in such fashion, which is why I don’t fret over whether mine has the most useful/intuitive format. Having a blog is about doing it your way.)

Annoying unsolicited advice: I had a little trouble figuring out where the “blog” portion of Meanderthals lives — the navigation menu across the top is elegant and subtle, but also nearly invisible. And hosting a site with a distinct title underneath top-level domain with a totally different name (internetbrothers.org) is confusing — though understandable in this case; it’s dot-org kin to Jeff’s Internet Brothers dot-com domain.

Jeff has a keen grasp of what needs to be said about a hike — key points of interest, advice on dangers, insight on the biomes he’s hiking in. I want more active verbs and less passive voice in his writing, but I want that from everybody (so badly that I devoted a new business to the concept; I’m just a tad obsessive on this point).

Not the last word: Jeff demonstrates what I wish every blogger did before diving in: spending some time to figure out what must done to make a blog worth reading. It’s about making your blog consumable instead of disposable. If Jeff quits blogging tomorrow, he’s still left the Web a bit better than he found it by posting useful, authoritative descriptions of local hikes. We should all aspire to that.

(Addendum: Jeff took up the “profile a hiking blog challenge” and had his review of Two-Heel Drive posted before I finished this one. I realize this looks like some kinda quid-pro-quo but I can assure you it’s just a coincidence. It’s not like he could’ve known I’d be reviewing his site.)