Nothing rational ever happens in a dream. For a few seconds I’m advising Obama on raising the debt ceiling, then I’m running I’m naked through my neighborhood, mentally screaming “my kingdom for a loincloth.” 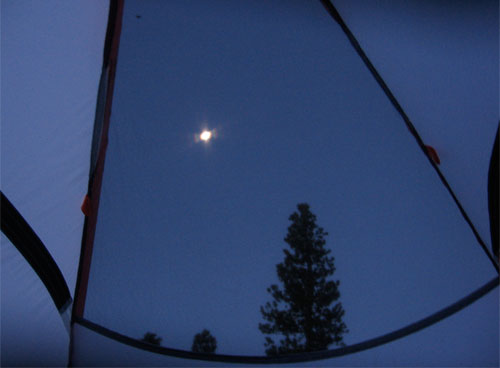 Moon from inside a tent, Immigrant Wilderness, July 2006

So I see no reason to be rational about my entry in the August Outdoor Blog Carnival, which asks, “What is your dream hike?” Given that we can’t will good dreams into existence or wish bad ones away, I figure my dream hike would probably be something like this:

I’m trekking the Inca Trail when a band of conquistadors appears around a bend. They holler at me to halt, in perfect English, which strikes me as odd, but it’s not nearly as odd as the fact that they’re hauling cameras and sound equipment.

Turns out they need some help on their script treatment — they’re doing an English-language remake of Werner Herzog’s Aguirre, The Wrath of God, only it’s a musical comedy with Jim Carrey in the Klaus Kinsky role.

They take me to their camp, where Herzog is lecturing on the Blank Indifference of the Wilderness while “Grizzly Man” plays on a large screen behind him, with the sound turned off. It’s not the movie I remember, however, because Timothy Treadwell has a high-powered rifle and appears to be advising on where to aim for the most merciful kill.

Now I’m in the High Sierra on the John Muir Trail, where a guy who’s a dead ringer for John Muir has set up a stand selling Bud Light with a retinue of boob-job divas.

I stop at his make-shift bar and order a beer, which looks exactly like the piss-water that Bud Light actually is, but tastes exactly like the Gordon Biersch that made life livable back when I lived in Silicon Valley.

The honcho of boob-job divas is a red-headed knockout named Jessica, who tells me Bud Light sponsors their hiking group, which they started because trail running was too painful. I want to tell them about my hiking blog, but they disappear down the trail before I get the chance.

I’m warming my hands on a campfire in the Grand Tetons. I’m discussing the intricacies of political struggle with Bill Clinton and Mohandas Gandhi when Jessica and her friends wander into camp, asking if we mind if they set up tents here.

There are six of them and three of us, so I figure my chances must be pretty good, given that Gandhi had that whole abstinence thing going.

My brain has seduction lines honed to razor perfection. But when I attempt to talk, the only words that come out are quotes from my hiking blog.

Lusty sounds from nearby tents are all I remember before I wake up.