Big Basin Redwoods State Park is one of those places where you walk into the woods thinking of trees as expendable implements of human intent like any right-thinking Republican but you walk out of the woods a confirmed tree-hugger.

The redwoods in this park are that spectacular.

The living ones grow to the sky, so tall the tops fade to blue. The dead ones span a hundred yards of forest, bringing some of that splendor down to ground level. Human eyes can barely take it all in; cameras are utterly unequal to the task. But everybody in these woods is taking pictures — it’s why cameras were invented, to help us remember the really cool stuff.

Last week I sent out an e-mail to my hiking cronies, asking if any were interested in a 12-mile jaunt through Big Basin. The only taker was Yipeng, who hiked with the FOMFOK club at Mount Diablo in January and the Pinnacles in March. Yipeng is great company, an engineer who came to the United States from Beijing shortly after the Tiananmen Square uprising. She’s also a tennis player who competes three hours at a stretch a few times a week, which means she hardly breaks a sweat in a mere 12 miles up and down these trails.

Me, I broke many sweats. I actually felt a bit guilty that I was getting a heart-pumping, heavy-breathing, calorie-burning workout while all Yipeng was getting was a nice five-hour walk through the forest. Actually, nice undersells it a bit. Amazing is more fitting. 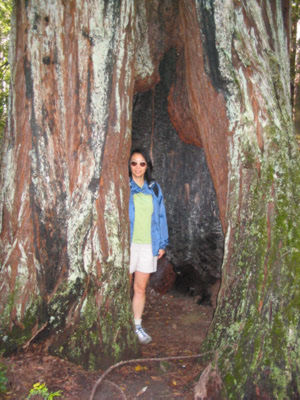 Yipeng inside an ancient redwood whose innards have been hollowed out by fire. 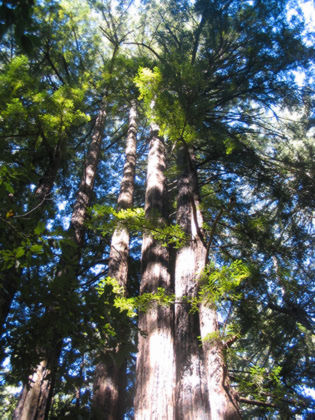 The temptation to spend spend all day staring at the treetops is tempered by the risk of cartwheeling down the hillside after straying from the trail.

We set out from the park headquarters on the Sunset Trail, which goes up, down and around for about five miles before reaching the waterfalls that everybody hikes here to see. 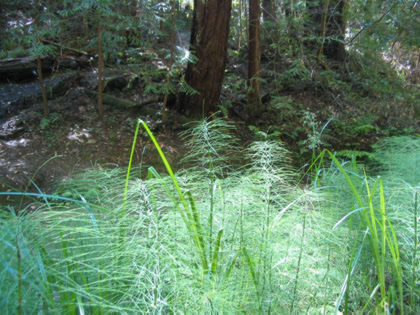 I love the shade of green in these fern-looking plants. They grow in the canyon bottoms along the streams that eventually pour over a hillside to create the waterfalls. 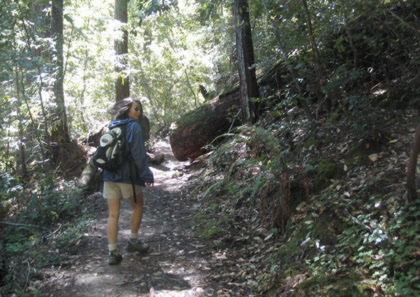 Yipeng: "Am I going too fast?"

That worked for about the first mile. After that it was as if my legs and feet had taken over the vocal centers of my brain, causing it to form such unthinkably non-macho utterances as " let’s take it slow on this next hill, OK?" 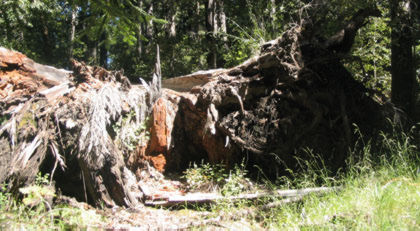 In life, Coast Redwoods grow together from multiple trees; when they die and fall over, they leave these great big tangles of roots. Can’t imagine what it sounds like when one of these behemoths hits the ground. 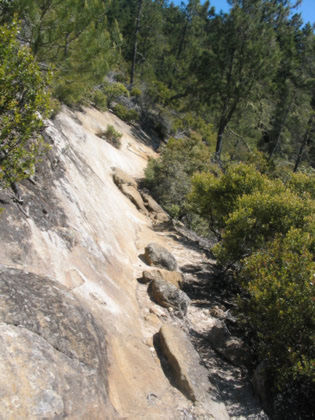 So we walk for a few miles through nothing but redwood forest, then we top a ridge and come out on this scrub-savannah-looking stretch of terrain. Amazing biodiversity. Did I just say amazing again? Sorry. And we haven’t even gotten to the waterfalls yet. 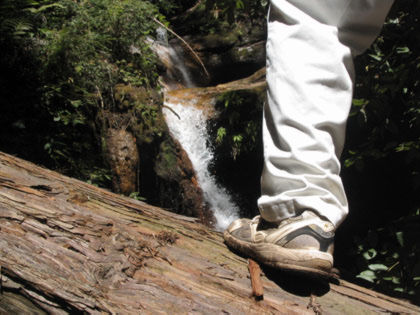 The Sunset Trail starts going downhill next to a creek that cascades over increasingly large rock formations. Another hiker was standing on this tree taking a picture when I walked in behind him and got a swell picture of his heel. 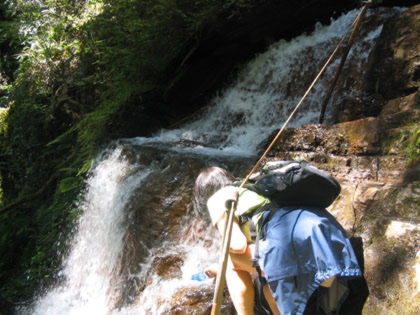 It starts getting interesting here: The trail is right next to the fall, and there’s a cable to grab to avoid slipping on the wet rocks. Yipeng’s rinsing off her water bottle, which she had accidentally dropped into the mud. 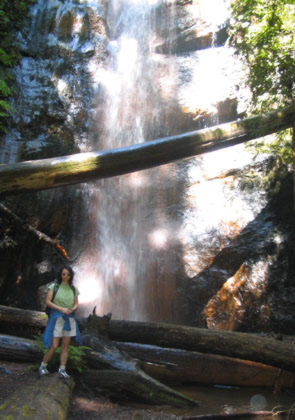 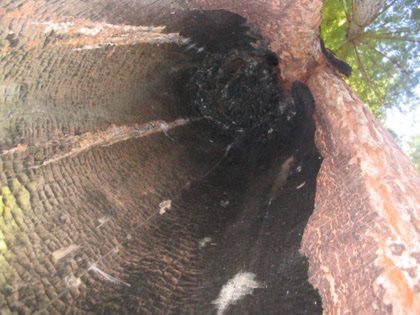 A burned-out redwood along the way. I pointed my camera up into the hole and snapped; good thing I had the flash turned on, eh? 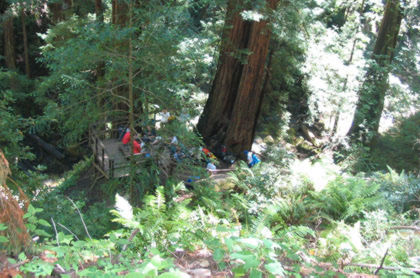 A bunch of backpackers rest up on the platform overlooking Berry Creek Falls. Our hike’s about halfway over now. 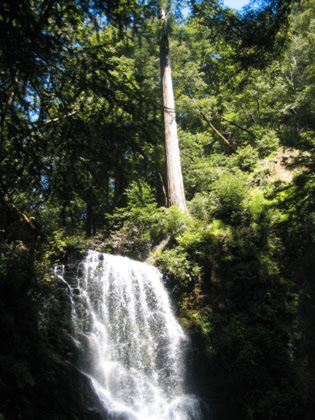 Berry Creek Falls is the most majestic of the bunch. 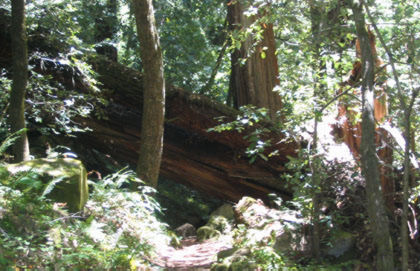 On the way back we hike under a mammoth redwood that has fallen across the trail. It must be 12 feet thick. 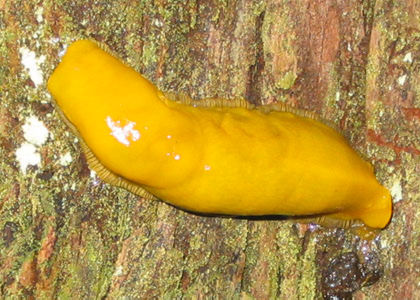 Banana slug: Official mascot of the University of California-Santa Cruz! 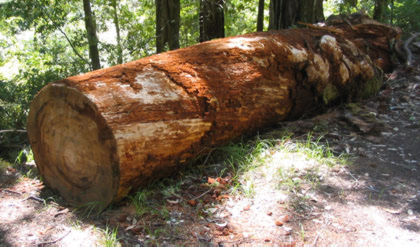 Here’s one old redwood has a lot of red left in it.

At this point I hand the map to Yipeng, who guides us back to the proper trail. I mention this not to advance the stereotype that women have more of the brain cells required to ask for directions rather than blunder on hoping something’ll turn up. I just want to tell anybody who comes to Big Basin to buy a map, watch the trail markers like a hawk and be prepared to admit you are lost at the earliest convenience. I’ve heard of people walking five or six miles out of their way because of a single wrong turn, or stumbling back to the parking lot in the dark because they misjudged how long they’d been in the woods.

With all this beauty to gawk upon, it’s easy to get off track. But what a place to lose yourself.

Update: Yipeng sent along these pictures of yours truly that she took: 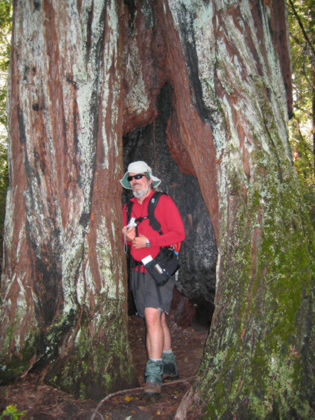 There’s a lot more room for me inside hollow trees since I went on this fitness kick. 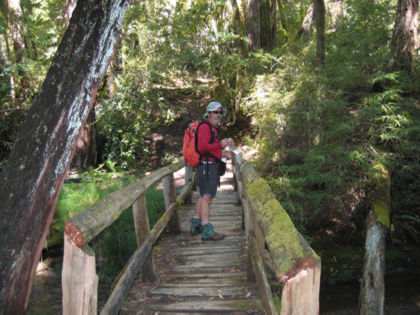 Many bridges to cross, as the song says. 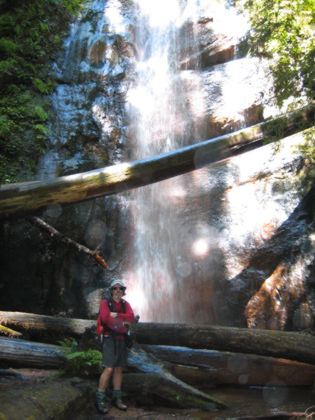 Silver Falls, guaranteed to make you feel small (and I mean that in the best possible sense).