Yesterday I drove 55 miles up to Contra Costa County to tag along with this club called the East Bay Casual Hikers. The plan was to scale a minor peak somewhat ambitiously titled Mount Olympia. It topped out at about 2900 feet, with about 2300 feet of elevation gain. A sweaty slog for a beginner like me but not a major challenge for veterans. (Don’t worry, there are pictures down at the bottom).

The hike to the top was curvy, steep and a bit rocky in some places. I was among the last to get to the top, which is about right. It’s been that way for me since my first little league team lost all its games and my second won two. I will be the worst at anything requiring muscle or coordination (but I can blog circles around em!).

So, anyway: The folks I was walking with were mostly seasoned trail hands who made it to the top at least 15 minutes ahead of me. Three of them were so unimpressed by the climb (billed as “hellish” by Brian, our leader) that they set off for the next peak over. Six of us headed back down the hill, perhaps with an idea toward saving our strength.

Turns out we were going to need it.

We went back the way we came for about hundred yards and came to a junction. Brian, the only one with a map of the place we were hiking in (Mount Diablo State Park), told us one of the trails took a little loop that would allow us to take a different way back to the main trail we came up on. None of us knew the trail (including Brian, it turned out) but we were feeling adventurous and besides, it was all downhill, right?

The trail is steep, narrow, rocky and overgrown. Leading the way down is a guy from Georgia named Homer, who was the closest thing to a human mountain goat I’ve ever seen. He and the two people with him (a guy named John who owns his own record label and a woman named Jen who was in a hurry to get the hike over with) got about 50 yards ahead of us and ran out of trail. Brian and I came along behind them — we could hear their voices so we walked in their direction, leaning under trees and pushing prickly bushes out of the way to catch up.

Finally we all got reunited, the trail emerged from the brush and we were back on our way, till we hit another trail junction. The consensus vote was to take the one going downhill, which was fine till Brian rechecked his map and became convinced the downhill trail would leave us a few miles from our cars. So we trudged a quarter mile back up to the junction (I needed an uphill climb like a hole in the head at that point).

So now we’re back on a trail that gets narrower and stickier until it just sort of goes away. We’re heading down this steep ravine that’s going to require another climb up another steep ravine to get back to the main trail. Homer leads the way, just traversing the hillside till we get to the bottom — a dried-up pond with mean hills all around.

Homer, Jen and John made their way up out of the ravine and confirmed that the real trail was up there. I had only one problem: too damned tired to make the climb.

But my problem was nothing like the one facing Lourdes, the woman bringing up the rear of our group on the trail. She was falling further and further behind as the rest of us made it down the ravine. We had Homer showing us the way when the trail vanished, but Lourdes had no such help.

We heard her holler “there’s no trail here!” and I was too busy wondering how I was going to get out of this mess to wonder how to get Lourdes out of the fix she’s in.

At this point, Brain hands me his water bottle — bone dry — and yells up the hillside, “Stay where you are, I’m coming back for you.”

And he proceeds to clamber back up that rocky slope to help Lourdes. I’m not sure how far it was but it had to have been at least a hundred yards up a really, really steep hill. I admired the hell out of him for trying it.

I was in no position to save anybody — all I could do was sit on the ground in that dried-up mudhole and wait for some strength to return before climbing the slope on the opposite side of the ravine. While I’m resting up, John is on one side of the ravine yelling over to Brian, trying to tell him where the trail is. The only trails are really footpaths for deer and cattle. They’re invisible to anybody standing on them but somebody 20 yards away can see them fine.

I was hearing a lot of “there’s nothing here” and “well try up there a few feet ” as I made up my mind to climb up out of the hole. It wasn’t quite as hard as I feared it might be — but mainly that was because I abandoned all pride and just grabbed whatever vegetation I could hold onto and pulled myself up the hillside. Good thing I still had some strength left in my arms and shoulders.

It took some doing but we finally all reconvened on a wide path that turned into an old road. Brian tries to lighten things up by saying “hey, I told you it was going to be hellish.” I don’t remember anybody laughing.

A few minutes later, more good news: I’m out of water with at least two more miles of trail back to the car. After awhile Brian finds another shortcut but only John and Homer are brave enough to take him up on it.

Jen, Lourdes and I stay on the main trail; Jen’s in a hurry and disappears up the trail ahead of us. Lourdes and I are so sick of this hike by now that we walk the last couple miles mostly in silence. It’s 90 degrees in the shade, and we have no map, no leader and only our memory of the walk in to guide us back. Fortunately there’s a dry creekbed next to the trail, and I figure it must the same one I saw when I parked the car. I stay on the trail following the creekbed and it gets us back where we started 5 hours and 20 minutes earlier.

Brian and Homer are waiting at the cars, and Lourdes tells Brian, “thanks for saving my life.” She was kidding, but only a bit.

I’m thinking, “thank God that’s over” but this day had a final insult: as I drove away from the curb I noticed I was having a hard time maintaining my equilibrium. Geeze, dehydration symptoms are what I need like a second hole in the head.

I stopped at the first gas station I could find and bought two 24-ounce bottles of water. I drank the first one in about three minutes and sipped on the other for the rest of the drive home. I learned how long it takes the body to rehydrate about the time I noticed I had missed my turn southward toward San Jose and had gone about 10 miles in the wrong direction. A trip that should’ve taken an hour and 10 minutes took almost two hours. But it was a good day for getting lost, so it made sense.

But enough of these words, let’s have some pictures: 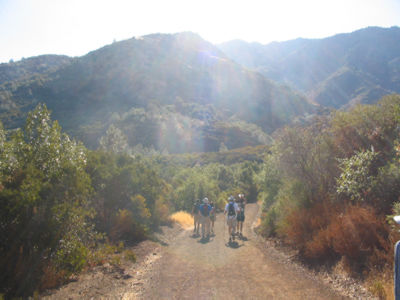 The sun gleams high above Mount Olympia — named not for the Greeks but (legend has it) for the cans of beer hikers allegedly stashed along the trail to fuel their adventures. 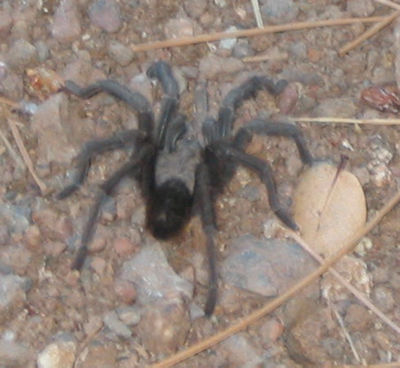 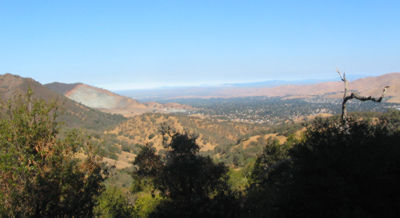 Nice job of cutting a hillside in half, guys! 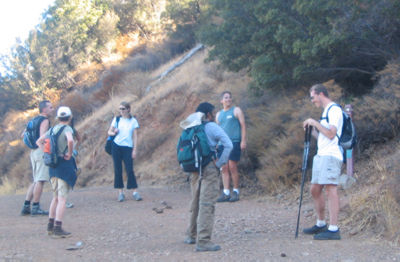 Everybody pausing for the slowpoke (me) to catch up. 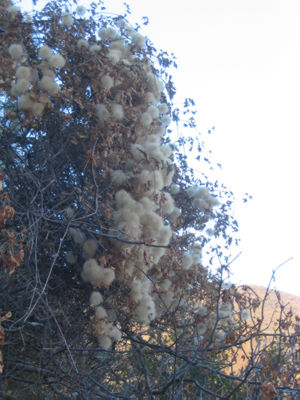 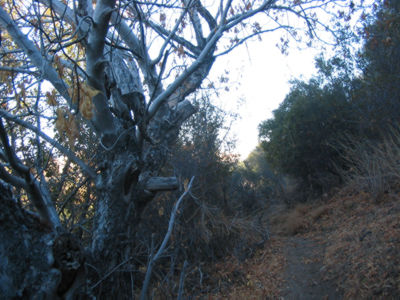 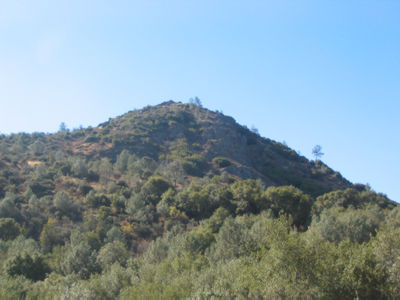 The summit taunts every climber. 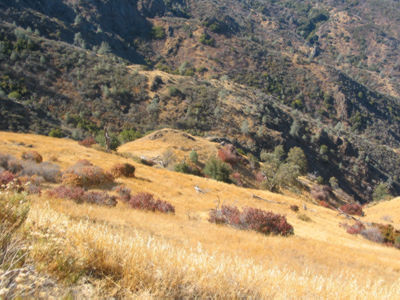 You wouldn’t want to roll down one of these slopes near the top of the hill, unless you were a cartoon character with miraculous powers of restoration. 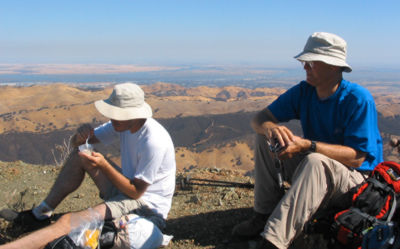 John, left, and Homer at the summit. 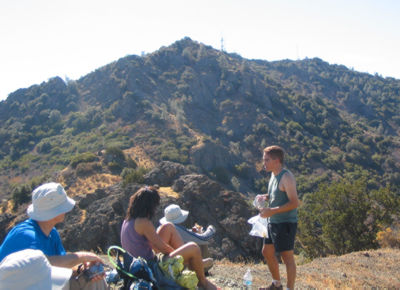 Brian, at right, talking to the hardcore climbers who are about to take off for the North Peak, which looms over his right shoulder. 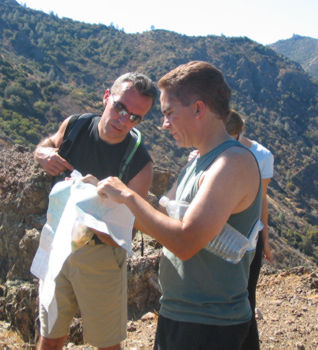 Brian gives instructions to the Australian guy whose name escapes me. He and two others left on the North Peak trail. I hope their return was less eventful than ours. 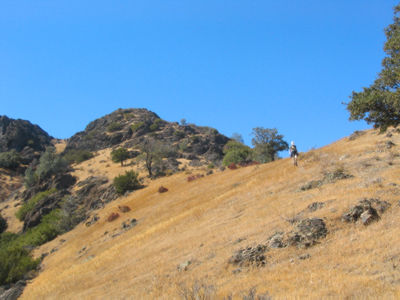 Back down we go. 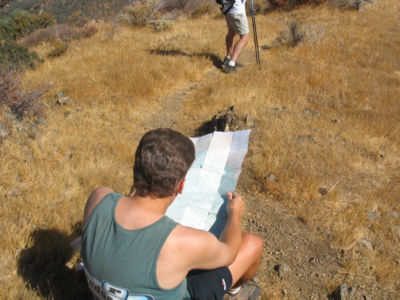 Brian consults his map again. Later I remember the old adage that every ship on the bottom of the sea has lots of good maps. 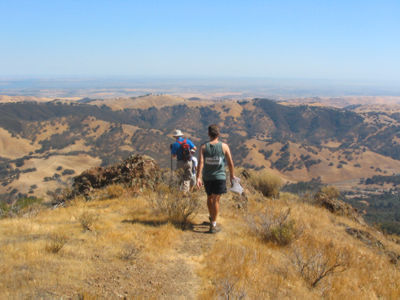 We’re still pretty high up the hill here, as the scenery attests. 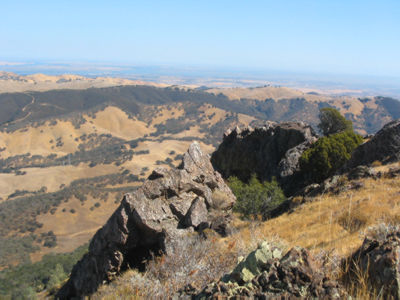 Nasty jagged rocks — beautiful if you’re not trying to hike across them. 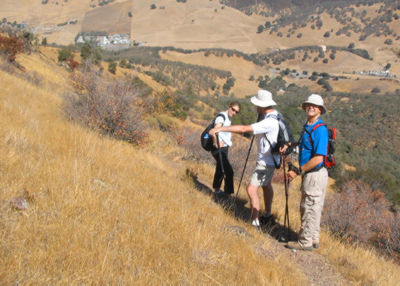 Jen, John and Homer head down one of the wrong trails. They also found the right ones, thankfully. 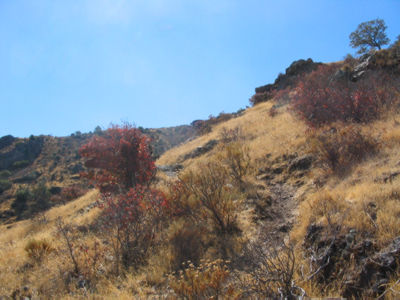 What do you mean, I have to walk back UP this trail? 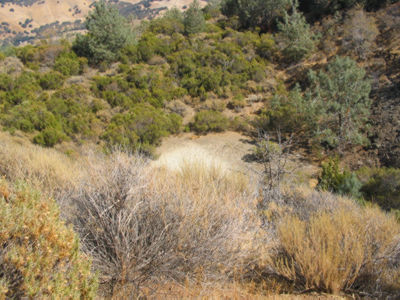 That light spot at the bottom of this ravine is where I had to rest up to climb up to this side. It was about like climbing to the upper deck of a football stadium, but without the steps. Those bushes have roots going way, way down, which means you can grab one and hoist yourself up the hill when the footing’s too loose. Well, that’s how I got up … the others were a bit more graceful. 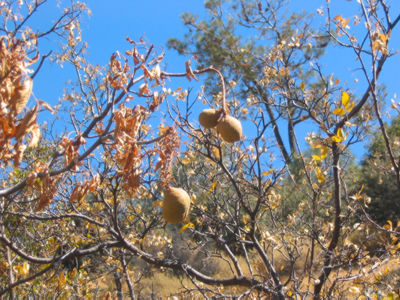 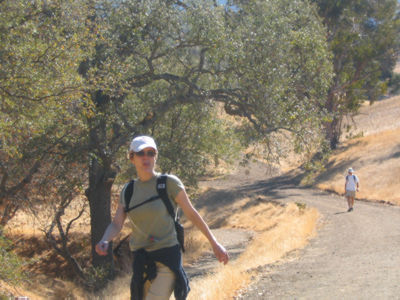 Lourdes near the end of the trail. 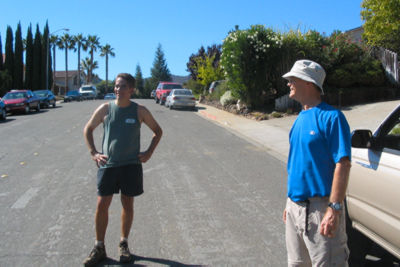 Brian and Homer look happy — perhaps because now they know they won’t have to go schlepping back up the trail looking for us.

A day later I’m still a bit tired from yesterday’s exertions. And despite the voluminous whining in this post, I can’t wait to do it again.