OK, I admit the side trip through the creek was a bad idea.

I was just about done with a 12-mile trek through previously unhiked (by me) sections of Sunol Wilderness Regional Park. The day had two distinguishing features: fog and mud. The fog went away after awhile but the mud stayed. I had this six hours’ worth of it caked on my shoes and as I got closer to the parking lot, the more I thought of that stream I crossed as I started out. If I could rinse my shoes off there, there’d be that much less to rinse off once I got home.

So, I eventually came across said stream, walked down a muddy path to its edge and realized my mistake: Even if I rinsed my shoes off I’d have to go back through the mud anyway. Suddenly the path on the other side seemed less muddy than the one I was on; I poked my hiking pole in the water at my feet. Barely an inch deep. OK, must be safe to cross, I figured. My luck lasted about three steps and then plop — I was in over the tops my shoes (which are wonderfully waterproof except when submerged). Cold water rushed in and that old familiar squish became the new theme.

By now I was committed so I went on across the stream. Along the way I noticed something remarkable: My feet were soaked, but they weren’t cold. See, I’ve got these high-tech hiking socks (14 bucks a pair, no less) that are supposed to keep insulating even when wet. I never put much stock in such claims — I just bought the socks because other people recommended them. But here I was with soaking feet that were toasty warm. Cool.

So that’s the end of the story, let’s get on with the beginning. It was so sunny on our hilltop yesterday that I knew I’d need my sunglasses and wondered if I’d need my windbreaker and extra layers I’d stuffed into my daypack. As I drove down the hill, though, I got a clue to what the day would be like: See, all the hilltops were poking up out of cloudbanks that had settled into all the valleys. My hike would start in one of those valleys but I figured, heck, I’ll just hike up to the sunny heights and take some cool pix of the carpet-of-white hanging at ground level.

If only. I started out on the Flag Hill Trail: The steepest in the park, climbing a bit over a thousand feet in elevation in a mile or so. The plan was that once I got up this high, I’d just spend the rest of the day at the higher elevations and have most of the climbing out of the way early. Did I mention I’d never hiked this part of the park before? 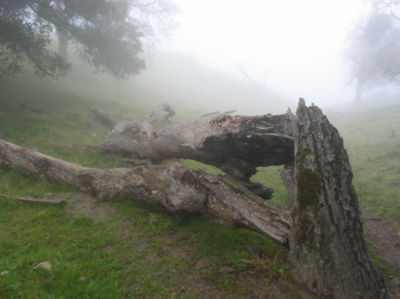 You may have noticed I can’t resist taking a picture of old dead trees. This is about halfway up the Flag Hill Trail. Normally there’d be spectacular views of the countryside nearby but this is about as sexy as it got with all this pea-soup fog.

The climb was tough but it was over in a mile or so. The summit was completely socked in. I dug out my trail map and decided I’d head over to the Maguire Peaks — a pair of hilltops that poke up out of the northwest end of the park. I set off down the trail, following the markers pointing to these peaks. Eventually I came to a paved road and realized I’d just walked down all the elevation I had gained at Flag Hill.

I came across a sign pointing to the Maguire Peaks Loop Trail, which is about five miles. My old plan was dead but I had a new one: Hike this loop and go back the way I came. There must be another way back to the parking lot without going back up to Flag Hill, right? 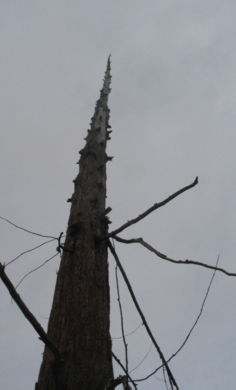 I know, more dead trees. I liked the way this one’s peak seemed to disappear into the fog, like if you climbed up it you’d find some really big dude screaming Fee-Fi-Fo-Fumb. 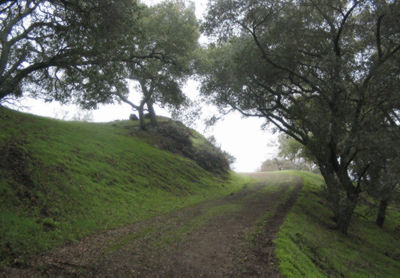 I stopped here for a moment and realized how green everything gets after a few weeks of regular rainfall. This is all brown in the summer. 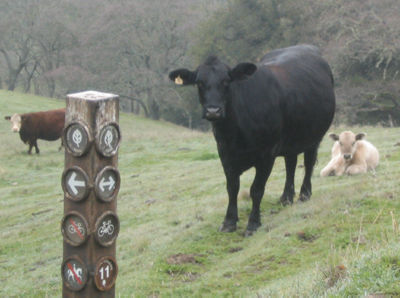 Another of my weaknesses: the icy, empty stares of cows. 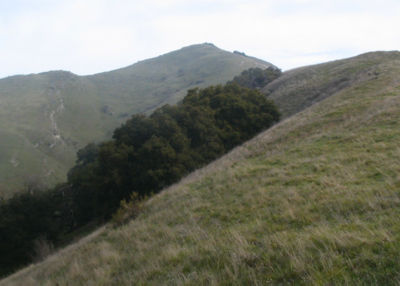 This is one of the Maguire Peaks. I walked all the way up there because, well, somebody left a trail. 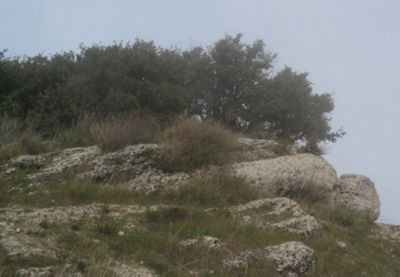 Here’s the summit of the peak I climbed. I’m always amazed when trees grow out of rocks. Imagine if people had that kind of determination toward, say, world peace. (I know, it’d be boring as hell — Star Trek with no Holodecks). 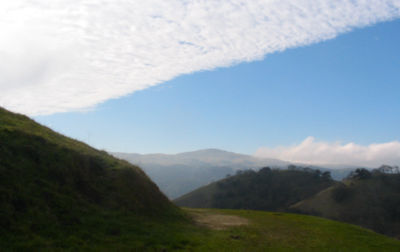 Finally the clouds start to part. That’s Mission Peak way off in the distance.

The loop around these peaks was mostly uneventful, though I did manage to take one wrong turn that took me down three quarters of a mile’s worth of muddy trails. I was having so much fun mud-skiing down the really slippery parts (times like this are when it pays to have hiking poles) that I wasn’t giving much thought to the possibility that this wasn’t the way I came in. Finally the trail bottomed out in a peaceful glade: it was quiet because nobody ever comes here, I realized after I checked my map. Turns out I was at the park’s extreme northern boundary, about as far as I could be away from the parking lot and still be in the park.

So, back up the hill I went. The mud wasn’t nearly as much fun this time. And my reward for all this effort was having to go most of the way back up towards Flag Hill before I could come back down. After about 10 miles with maybe 12 feet of flat ground, this was starting to feel like work. 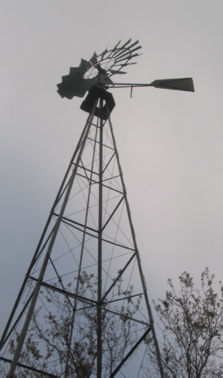 I found a slightly easier trail back to where I started. This swell windmill begged me to take its picture.

The great thing about Sunol Wilderness is that you never know when something amazing’s going to be right in front of you. Like this huge stand of cactus I came across. 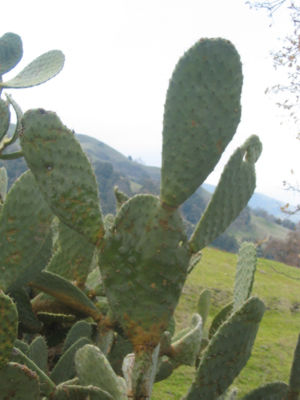 This one reminded me of Mickey Mouse.

After that it was a mile back to where I started. And one more muddy patch of trail to put certain foolish ideas into my head.