Back in July, when I was just starting to get serious about hiking, I wrote about hiking two peaks in two days — ambitious stuff for a 42-year-old rookie, really, because both of the trails are long and steep. The first was at Monument Peak, which I can see out my living room window; the second was at Mission Peak, which is a couple miles north of Monument as the crow flies. Saturday I did both peaks in about six hours.

If you’ve been following along, you may remember that the trail to Monument Peak starts in Ed Levin County Park, which is a few miles from our place. Once you get to the top of Monument Peak from Ed Levin County Park, it’s a couple miles over to Mission Peak, but you’ve done most of the climbing so it’s practically a cakewalk to the Mission summit. (My right pinkie toe, which acquired a rather nasty blister on Saturday, might beg to differ, but hey, toes never tell you there’s a problem till it’s too late, so who listens to them?)

So I’ve been wanting to bop over to Mission Peak ever since the first time I got up to Monument Peak. Here’s the thing: signs near the Monument Peak summit say it’s another four miles to Mission. So after climbing four miles of steep trails it’s an eight-mile roundtrip and another four miles back down those same steep trails. Some people, like those INCH folks I walked with last week, think nothing of 16-mile hikes but they’ve had a few more years to toughen up their tootsies.

One of the seasoned INCHers told me last week that that the signs are wrong, that it’s really only a couple miles over to Mission Peak from Monument — making it a 12-mile trek. I’ve hiked 11 miles a couple times, so I figured 12 shouldn’t be such a big deal. And it wasn’t, really. No horror stories to report, besides the blister (yes, Mom, I put a bandage on it to let it get healed up).

I did get a few nice pix, though, and a couple of blogworthy happenings happened.

One such happening involved the two guys I met at the start of my hike. One was Australian, the other Ethiopian. At one point the three of us were pausing on the trail when another guy came trotting downhill and sent us a greeting in a distinctly German accent. This could only happen in the Bay Area: as the American I was the odd man out. 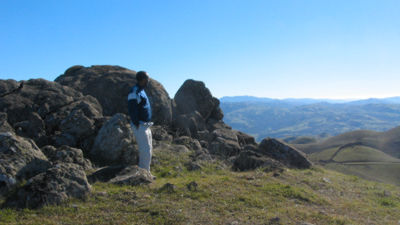 Here’ s the Ethiopian guy at the Monument Peak summit. He jogged some of the steepest sections of the trail (he’s a marathoner, his friend told me) and looked as if the four miles up here hardly caused him to break a sweat. I wasn’t too sweaty either, actually, because we walked into 30 mile-per-hour headwinds all the way up.

The wind and the hill tired me out a bit, but I was determined to hike on, so I bade them farewell and headed north toward Mission Peak. 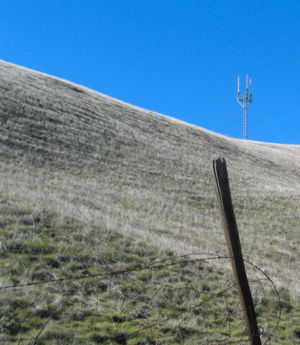 This three-pronged tower is on top of a hill called Mount Allison. It’s about halfway between Monument and Mission peaks, and it’s the most memorable landmark on all the nearby trails. As long as you can see this tower you should know where you are. 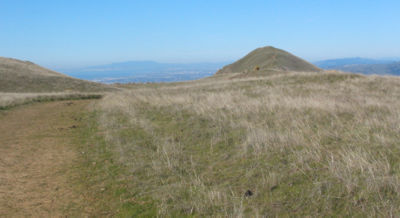 That hump up ahead is the Mission Peak summit. 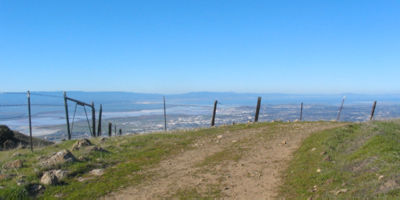 From here the far northwestern side of the San Francisco Bay is clearly visible — one reason to be thankful for the winds, which were reaching gale force as I got close to Mission Peak. 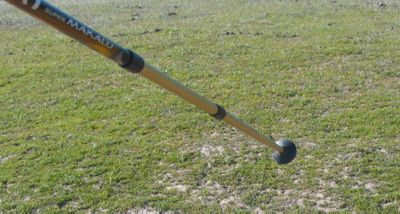 The wind blows so hard that it holds the tip of my trekking pole aloft. 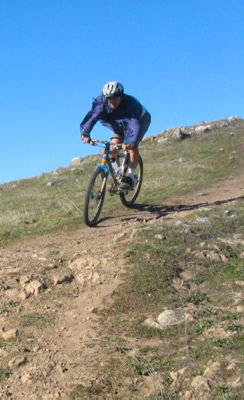 One of the hardcore mountainbikers leans into the breeze on the way down from the summit — it’s either this or let the wind blow him off the trail. 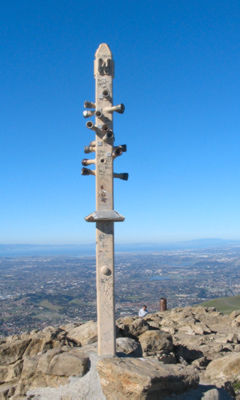 The Mission Peak summit looks peaceful enough, but only because there are no people in the frame. 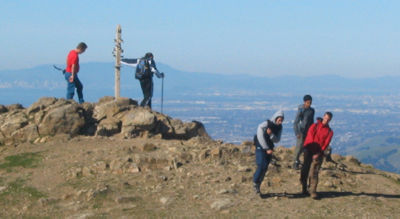 A few minutes later, some arrive at the summit and start looking for shelter. I’ve never felt such sustained blasts of wind — it had to be blowing over 60 mph at this point — but I had a fresh understanding of the travails of those TV reporters who stand outside and report live from hurricanes. 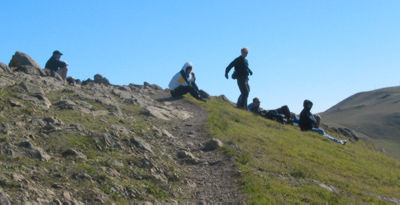 Some rocks just out of view block the wind here, which attracts people resting up for their hike back down Mission Peak. At least they’ll have a tailwind (which might not be such a good thing, considering how steep the trail is).

I sat down with this bunch to rest my feet, when I saw a familiar face heading my way. It was Peter, one of the leaders of the INCH hiking group, whom I had hiked with last week. Peter recognized another of his INCHers sitting right next to me. Small world, eh? 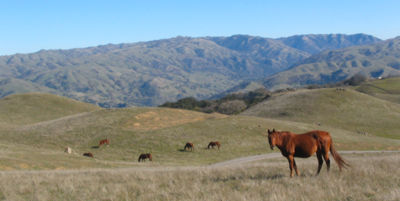 After taking a quick break for lunch I headed back toward Monument Peak. Along the way it occurred to me that everybody should have a mountain range in their neighborhood, and if they don’t, they should do something about getting one. I reckon these horses agree. 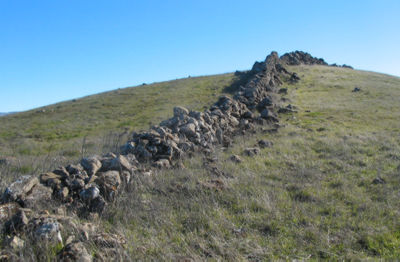 A bunch of the hillsides near the Monument summit have these stone walls. I’m assuming somebody went around with a wagon and picked up stones from the hillside and used them to build this fence. What it keeps in or out is beyond me. Seems like any creature with a plural number of legs could go right over it. But it looks cool, and maybe that was the point all along. 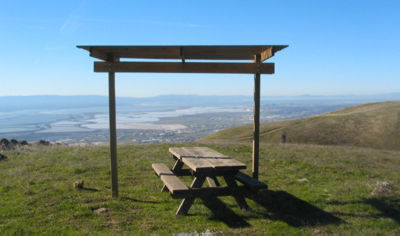 This is the loneliest picnic table in the park. You’d think such a view would attract a crowd, but I go up here to get away from crowds, so I’m not complaining. 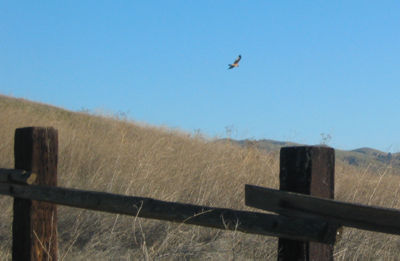 The wind died down as the day wore on, which meant birds could actually fly in it. 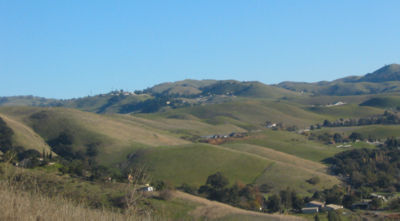 I’m almost done with the hike now; my little toe is making big noises in the pain centers of my brain, a timely excuse to stop for a second to capture this chunk of countryside. Our place is somewhere near the top of the hills in the center of the frame where the blue meets the green. Not so hard to see why previous inhabitants didn’t want to give this land up without a fight. Or, for that matter, to see why the late arrivals would be so eager to steal it from them.