The storyline could’ve been "city slickers go camping, hilarity ensues," but there are no disasters to report — primarily because Melissa had our camp-out worked out to the tiniest detail. If an earthquake had ravaged the region, we’d have been ready.

Last week Melissa and I did some driving around and decided to stop by the campgrounds of a couple county parks maintained by the Santa Clara County parks department. The nicest one we found is called Mount Madonna, which is at the top of the Santa Cruz mountains, the range closest to the Pacific Ocean. 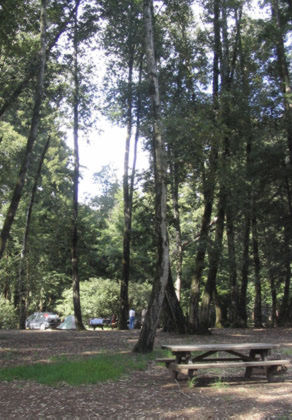 Here’s a look at the spot we staked out. Those tall skinny pine trees are mostly new growth because the early settlers of the Bay Area cut down most of the forests for homes and firewood. The remaining woodlands host a few ancient redwoods that somebody absent-mindedly forgot to cut down, and for that we are thankful. 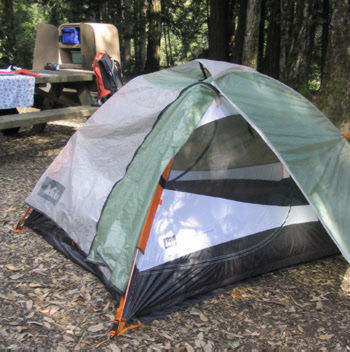 Our shelter for the night is a modern-day two-person pup tent, though it’ll be a cold day in hell before any pups sleep in mine — I paid 200 bucks for this spread of nylon and zipperage and I’ll be damned if anybody’s dog smells it up. 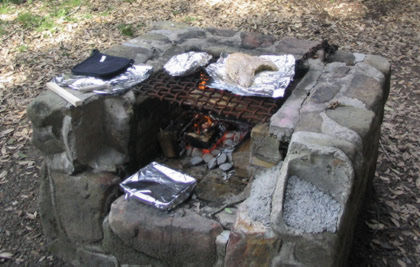 While I was pitching the tent, Melissa was attending to our dinner. None of this "franks and beans will do on our first camp-out" for us, nosirree. Melissa bought this stupendously huge slab of tri-trip roast beef, accompanied by baked potatoes and corn.

Right off the bat we noticed the fire wasn’t close enough to the grate, so we bought a box of firewood and piled chunks of pine in the fire pit so the flames could just kiss the bottom of the meat. I figured there was no earthly way that fire would cook three to four inches of beef all the way through, but little did I know that Melissa had a master plan: once the roast was browned on both sides, she cut it up into steaks that cooked up nicely. It seemed like it took ages to get ’em cooked, but the results were phenomenal: juicy and smoky with the flavor you get only from cooking over a wood fire rather than charcoal.

If only being cooped up elbow-to-elbow on sloping ground in that tiny tent could’ve been as pleasurable. We both had camping pads but we were sorely out of practice at getting comfortable in sleeping bags in tight quarters. We ended up unzipping Melissa’s bag all the way and throwing it over the top of us and I used my sleeping bag (another 200 bucks well spent) as a pillow. I must’ve slept some, but mostly I tossed, turned and wondered how anybody ever got a good night’s sleep under these conditions.

There were compensations, though. The sound of the wind passing through the treetops; the bracing effect of a waft of 40-degree air coming up under the tent fly. Gotta be in the woods to experience these.

The next morning we had all our gear back in the car within two hours; Melissa drove down to Watsonville to pick strawberries, which are just coming into their prime season, and I hiked about six miles on the trails of Mount Madonna County Park.

The countryside is an intriguing mix of dense pine at the upper altitudes and scrub in the lower regions. Sometimes the scrub and pine occupy the same hillsides. 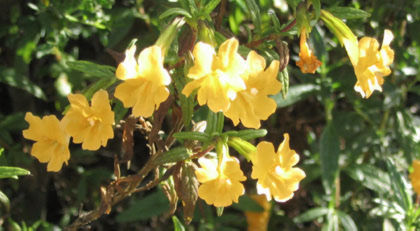 These yellow wildflowers are tough little guys; they’re among the last of the season. 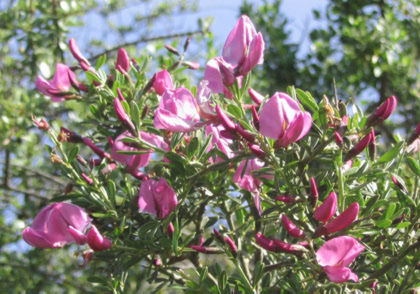 Splashes of pink decorate another bush. 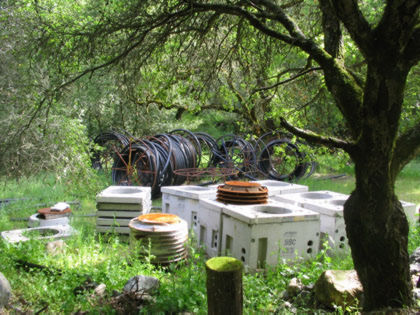 Ah yes, progress. Apparently this is a bunch of telecommunications gear somebody forgot to pick up. 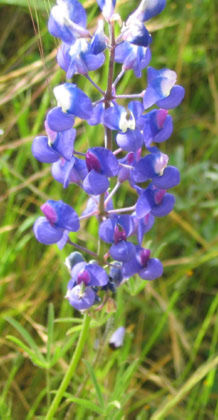 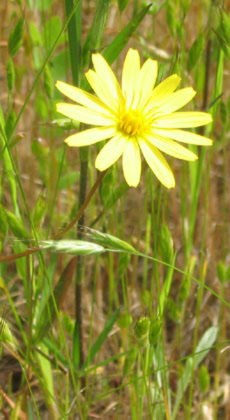 Yellow seems to be the dominant color of late spring. 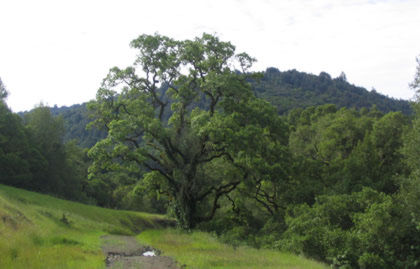 As required, another for the "totally cool trees" file. 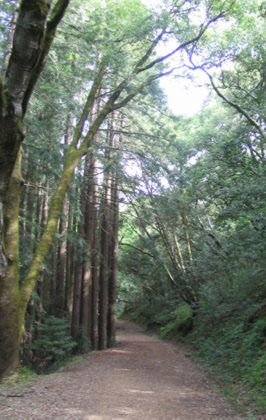 Here’s one of those places where all sorts of trees seem to be fighting it out for dominance. 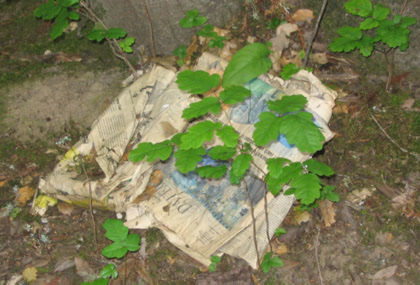 Newsprint returns to its maker. 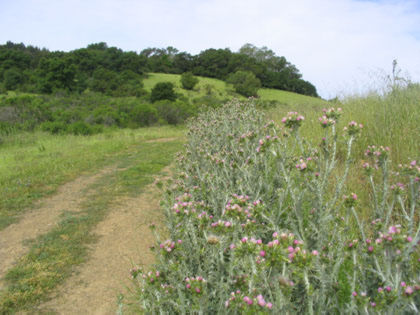 I swear these thistles would survive in the vacuum of space. Tough, thorny buggers. Make a mental note of that shade of green in the background; it’ll all be yellow in a few weeks. 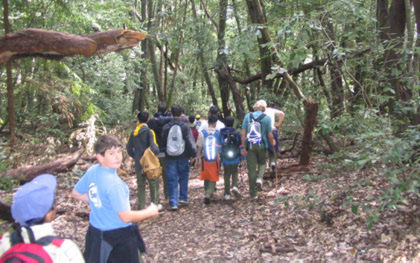 Some brave grown-ups took a gaggle of Boy Scouts for a morning hike. 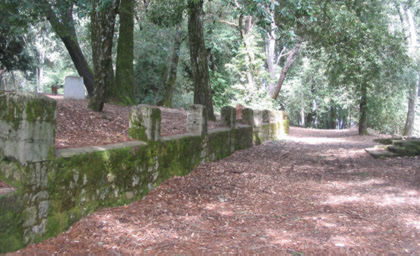 A Gold Rush-era cattle and land baron named Henry Miller owned a summer estate at the top of Mount Madonna. It fell into disrepair after he died and his heirs sold the land to Santa Clara County, which created the park. Moss-covered stone is all that’s left of his summer house 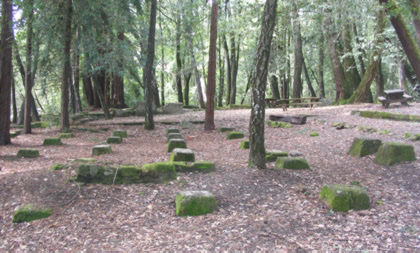 The house must’ve been built on these pilings.

Nice to see trees growing where Great Men once dwelled. In the end the forest always wins.