I remember as a child hearing about these guys whose plane crashed in the Andes in 1972 and who survived on the flesh of their deceased fellow passengers. “Stranded” is their story, remembered in stomach-knotting detail more than three decades later. 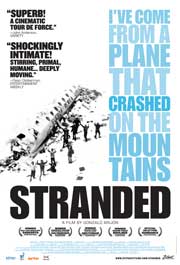 The film takes a tack familiar to documentaries about Vietnam vets who return to the villages they once attacked to bring the horrors out of hiding and deal with them head-on. The guys on that Andes mountainside landed in a moral wilderness combat survivors might find familiar, wondering why they survived unscratched while the person in the next seat was killed instantly; worried about how low they would sink to stay alive; racked with remorse over their survival compromises.

The story of the survivors plods along a bit until certain wake-up facts show up on the screen: Day 60. We know the rule of threes, that you can make it a few weeks with no food under somewhat normal conditions. On a freezing mountaintop at 19,000 feet, however, your body burns way more energy, so the grim decisions come much sooner. Sixteen young men men survived for two months up there. The movie is expertly crafted to explain their side of the story, but you’ll definitely get that queasy feeling if you dwell too long on it. (Another fine study is “The Custom of the Sea”

, which illustrates the pact between sailors trapped at sea and the clueless public that confronts the survivors’ deeds).

The dining-on-sinew angle, though, is secondary to the remarkable effort these guys made to stay alive. Two of them hiked across the Andes for over a week — with no mountaineering experience, no gear, no GoreTex — until they found a few shepherds in a valley who sent for help. A helicopter went back for the rest of them in a couple hours and it was all over.

The “how I did it” narrative is strikingly familiar to that of the protagonist in “Touching The Void,” who worked his way down a different Andean mountainside with a shattered knee after his climbing partner cut the rope connecting them to save himself: never thinking further than the next step, he just kept going.

related items. It might be worth checking out on Amazon’s video-on-demand service, though Netflix subscribers who’ve rigged their computers for instant movies can watch it for free.

No matter which way, if you’re into the survival genre and haven’t seen it, you’ll want to. (Note it’s in Spanish with subtitles).