It’s presumed there’s safety in numbers on a hike. But the tragedy at Yosemite last week demonstrates that there can be danger in numbers, too. While every additional hiker on an outing improves the chances that bears and mountain lions will be scared away, they also dramatically increase the chances for human folly to foul things up. 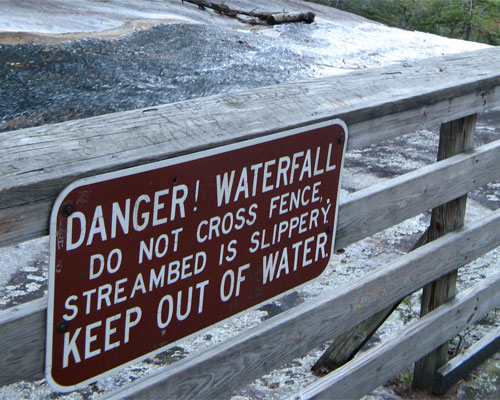 Or, as your Scoutmaster used to say, “it’s all great fun till somebody falls off a cliff.” A few things to bear in mind:

Enforce zero tolerance for antics that get people killed. That means you’re the first one to the waterfall and you emphatically insist that everybody obey the warning signs. If there are younger, faster hikers in the group, deploy a trusted lieutenant to keep up with them.

Make sure you know the route by heart. I went on a group hike once where the leader said “let’s see what’s down this way” but didn’t know what was down there. We all got lost and the rookies among us had a real scare. Frightened rookies are particularly prone to fatal stupidity.

For hikers in a group

Assume you’re on your own. Because you are. Picture this: you head off into the bush to pee, take a wrong turn and end up on another trail that looks just like the one you were on. But it’s going north and your group’s heading south. In 15 minutes you’ve gone three-quarters of a mile from where you left the group, which is now 1.5 miles from you. How screwed are you if you’ve got no map or any idea of the layout of the local terrain?

Take responsibility for the safety of your fellow hikers. Grab people’s arms before they stray off a cliff; yell at them to get back on the safe side of the barrier.

Ignore peer pressure. If something’s outside your comfort level, it’s OK to sit it out. You don’t have to join in if you think it’s too dangerous.

These are just the most obvious tips. What do you do to keep a group hike safe?