There I was, poised on a footpath at Sonora Pass, 9,624 feet up on the Sierra crest, surrounded by stately, snow-clad peaks. Stepping backward to get more mountain into my digicam’s viewfinder, I stumbled on a small rock, landed on my hands and hipbone, and yelled out a profanity rhymes with “duck!” as my camera reached hand-escape velocity and banged down to the dust.


“Are you OK?” Melissa yelled from across the highway.

Sure enough, when I tried turning the camera off, its lens refused to retract all the way. The camera emitted an array of strange beeps — digital cries of distress, I presume — but the lens refused to go back where it belonged. Jammed. Good as dead. Alas.


In two years of hiking I’ve been over every kind of rock and stream and hill the Bay Area provides, plus a few choice ones in the Sierra; it’s not a stretch to guesstimate that I’ve put in close to 2,600 miles – the approximate length of the Pacific Crest Trail — since the summer of 2004.


With that kind of mileage under foot, I felt I deserved a more honorable or dramatic account of my camera’s last gasp. You know, lost it in a raging snowmelt stream or some such. Instead, I was standing not 50 feet from my car — on the storied PCT, for sure, as I found out later, but not hiking. Just kinda standing around gaping like a tourist. 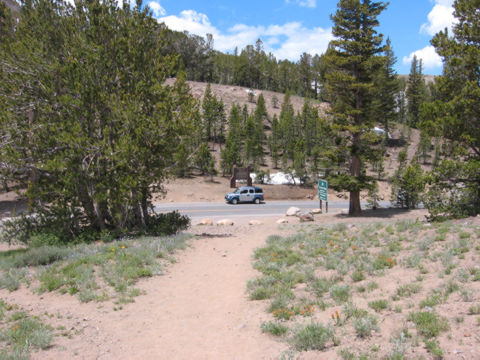 Here’s the approximate scene of the crime (that’s my new Honda Element along
the road).

When I got home I defied common sense and owner’s manual advice and tried to open the case to see if I could spot a piece of grit or something jamming the lens mechanism. I did get the camera case most of the way off, but I had managed to gouge out one of the Phillips-head screws and couldn’t get it loose. At this point I resorted to bending back the plastic case to look inside, figuring if I busted it, what the heck, it’s dead anyway. Then my hand pressed against the lens housing and a miracle occurred: it retracted, sliding right back to its home position.


Finally, a hopeful sign. I stopped pressing my luck and started pressing the cover halves back into their original positions. I replaced the batteries, turned it on, and eureka: the camera lens came out the way its brilliant Japanese designers intended and an image appeared on the LCD screen. I clicked the shutter and sure enough: it was working.


One of the consequences of cheap, plentiful digital cameras is that when one dies, it’s been replaced on a market by a model that costs less and does more. I wasn’t exactly grieving at the notion of having to get a new one, but now I’m starting to develop an attachment to this one. This is the second hard fall it’s survived. I dropped it on creek rocks in Henry Coe State Park back in April; the impact was strong enough to split one of the seams where the camera cover attaches to the body, but it kept working.


If you’re dying to know, the camera is a Canon PowerShot A510. It’s a cheap, small, reasonably lightweight point-and-shoot that will no doubt be replaced by something better in the time it takes me to type this entry in to the blog. It’a tough little bugger, and it’ll be fun seeing how many more lives this electronic cat has.


Speaking of digicams, Backpackinglight.com has a free comparison of many models on the market.